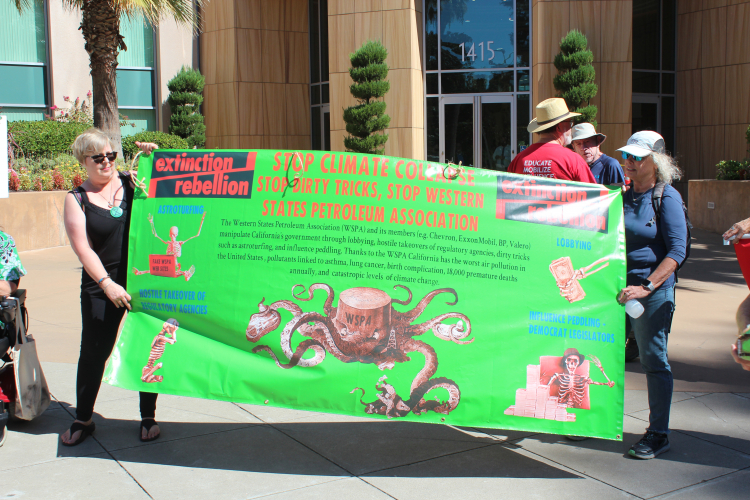 original image (5184x3456)
MCKITTRICK, Calif.— Do you still think of California as the nation’s “green” leader?

You might take take another view of this image propagated by state officials and the media after you look at recent reports revealing that oil waste fluid is polluting so-called “protected” aquifers in California as the Gavin Newsom administration continues the expansion of oil and gas drilling in promoted under Governor Jerry Brown.

You also might take another look at California’s often touted “green” reputation when you discover that the only two bills opposed by the oil industry, the most powerful corporate lobby in California and the West, have been make it out of the legislature to the governor’s desk over the past three years.

A U.S. Geological Survey report published in September reveals that oil industry waste fluids containing benzene and other toxic chemicals have migrated into California’s groundwater through multiple pathways at sites in Kern County, west of Bakersfield.

The report, published in September’s Environmental Geosciences, “confirms findings in previous USGS studies showing how toxic waste fluid from California’s oil industry has contaminated multiple underground water sources in the Central Valley,” according to a statement from the Central California Environmental Justice Network and the Center for Biological Diversity.

The abstract for the report states, “Increased oil and gas production in many areas has led to concerns over the effects these activities may be having on nearby groundwater quality. In this study, we determine the lateral and vertical extent of groundwater with less than 10,000 mg/L total dissolved solids near the Lost Hills–Belridge oil fields in northwestern Kern County, California, and document evidence of impacts by produced water disposal within the Tulare aquifer and overlying alluvium, the primary protected aquifers in the area.”

The report was issued at a time when Legislators and the Governor are under fire from environmental justice, conservation and climate groups over increased oil and gas drilling under the Brown and now Newsom administrations.

According to the groups, “Results indicate that large numbers of water supply wells, including wells currently used for irrigation, contain chemicals that have migrated from oil and gas operations. Water samples from the Fruitvale and Lost Hills areas were found to contain hydrocarbons like benzene, ethylbenzene and xylenes. In two instances the levels of benzene, a cancer-causing chemical, were higher than the safe limit for drinking water.”

“The Central Valley, particularly Kern County, ranks number one for numerous environmental injustices, including having the worst air quality in the nation. To add insult to injury, now we have confirmation of something we suspected all along: Wastewater from oil companies is contaminating our groundwater,” said Gustavo Aguirre Jr., Kern County coordinator for the Central California Environmental Justice Network.

“The number of spills that occurred recently are just the tip of the iceberg of a problem that we are not willing to tolerate anymore. Gov. Newsom must ban fracking and extreme methods of extraction now and set a timeline and plan to transition from fossil fuels,” stated Aguirre.

Aguirre said the studies stem from a process that began in July 2015, when the California State Water Resources Control Board found that 107 oil and gas fields in the state are “high priority” for studying their adverse impacts on groundwater quality.

“These shocking findings confirm that the oil industry is contaminating California’s precious underground water,” said Hollin Kretzmann, a senior attorney at the Center for Biological Diversity. “The dirty truth about the oil industry is out, and our state should be cracking down on these polluters. Instead of letting oil companies foul our water, Gov. Newsom should start a just transition to a safer and cleaner future.”

According to Kretzmann, over the past three years, the USGS has worked with the state board and regional water boards to test groundwater in and near the top-priority Fruitvale, Lost Hills, South Belridge and North Belridge oilfields in western Kern County.

“The most recent study identified two pathways for pollution migrating to groundwater. First, contaminants dumped by the oil industry into unlined wastewater pits have trickled down through the soil into groundwater below. Second, researchers found “direct evidence” of waste fluids injected deep underground migrating outward from oil-industry disposal wells into surrounding aquifers,” he said.

He said the findings “contradict repeated assurances” from state regulators and the oil industry that oil and gas fluids would remain in place and not migrate to nearby groundwater sources.

“In an earlier study, samples from multiple water wells were found to contain high levels of radium, a radioactive element found in oil-industry wastewater. Eighteen percent of water wells sampled near the Fruitvale, Lost Hills and South Belridge oilfields contained unsafe levels of the chemical,” the groups revealed.

The USGS report also follows Food and Water Watch’s new report, California Leads: How to Break Fossil Fuel Dependence in the Golden State, that details the web of fossil fuel infrastructure - including 298 gas-fired power plants and 100,000 miles of oil and gas pipelines - currently engulfing the state, and the proposed expansion of this network.

“Corporations are planning seven additional unneeded gas-fired plants for California,” the report revealed. “For years, California regulators have approved, and utilities have built, unnecessary and expensive gas power plants. Driven by deregulation, these facilities are useless given declining energy demands in California over the past decade.”

The report also noted that existing fossil fuel operations mean that California is second only to Texas as an emitter of climate polluting greenhouse gasses.

The Food and Water Watch report says that driven by energy deregulation, California has overbuilt gas power plants, even though energy use has declined over the last decade and the price of renewable energy is rapidly dropping.

“Most of this toxic infrastructure is located in the most vulnerable neighborhoods—in low-income communities of color near homes, schools and parks,” the group stated.

The report also shows that California also “routinely allows oil companies to inject toxic wastewater into the ground,” in violation of the Safe Drinking Water Act. Between 2017 and 2019 regulators granted as many as 39 aquifer exemptions allowing such injections. Some counties even allow oil companies to sell wastewater to farmers to irrigate crops.

The report states, “While most oil production occurs in the San Joaquin and Los Angeles Basins, the industry also drills throughout California’s central coast, from Ventura to Monterey County. In recent years, California has been dominated by dangerous new oil extraction technologies, including hydraulic fracturing (“fracking”), matrix acidizing and steam injection.

Today, there are over 80,000 active oil and gas wells in the state. California is the seventh- largest producer of crude oil, and as of 2018 it had the third most oil-refining capacity of any state, the report finds.

“More troublingly, oil and gas operations harm the most vulnerable Californians, especially lower-income people and people of color. In 2014, nearly 14 percent of Californians, primarily people of color, lived within a mile of at least one well. And the closer people live to drilling, the higher is their potential exposure to hazardous pollutants that increase the risk of respiratory and neurological problems, birth defects and cancer In Los Angeles, the communities closest to oil development suffer from headaches, asthma and nosebleeds. Drilling in California happens close to homes, hospitals and schools,” the report reveals.

The report notes that while running for office, Governor Gavin Newsom “promised to move California away from polluting fossil fuels to renewable energy.” Newsom also pledged to close down the Aliso Canyon gas storage facility—the site of the worst gas blowout in U.S. history—and to ‘‘oppose fracking and other unsafe oil operations.” Since taking office, Gov. Newsom has yet to take action on those promises, Food and Water Watch pointed out.

WHY Oil and Gas Drilling Has Expanded in California: Deep Regulatory Capture

To understand WHY California continues to expand onshore and offshore oil gas drilling as state officials constantly tout its green facade, one should also read my report on the capture of California regulators from top to bottom: California's Biggest Secret? How Big Oil Dominates Public Discourse to Manipulate and Deceive : http://www.dailykos.com/…

Environmental NGOs and media outlets inexplicably still refuse to discuss one of the biggest West Coast environmental scandals of the past 20 years, in spite of its huge ramifications to this day: the capture of what passes for “marine protection” in California by the Western States Petroleum Association and other corporate interests.

In one of the largest and most overt conflicts of interest of the past 20 years, the President of the Western States Petroleum Association (WSPA), Catherine Reheis-Boyd, chaired the Marine Life Protection Act (MLPA) Initiative to create faux “marine protected areas” in Southern California from 2009 to 2012. (http://www.dfg.ca.gov/marine/mpa/brtf_bios_sc.asp). N