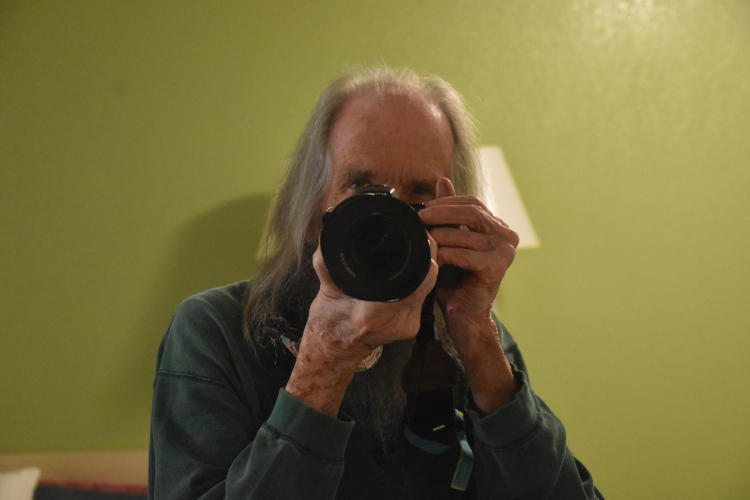 original image (2048x1365)
A little about myself. I am a Father, a grandfather of ten, and a great grandfather of seven. I became an activist in the early to mid-'60s when I got involved with the civil rights movement, and then I worked at the San Jose Peace Center to end the war in Vietnam. My father was a decorated US Army Colonel, and I am proud to say that both my mother and him also came to agree with my actions and beliefs. Since that time, I have always worked for human rights, children's rights, and animal rights. I worked for Santa Clara County Schools as a PE teacher with special needs children before moving to Santa Cruz. When I moved to Santa Cruz in late 1969 or early 1970, I continued my work for veterans and others involved with their actions regarding the Vietnam War. I volunteered for the Resource Center for Nonviolence during the first war in Iraq with Scott Kennedy, Doug Rand, and others. When I learned of the plight of the American Indian, and read the real history regarding how they were mistreated, and how they are still being mistreated to this day, I started working for the original people and tribes of our country. I also got involved with the American Indian Movement (AIM). I became close friends with several of the founding members of AIM for many years. I am not a hater, and I have never been! I have always and will always work for what I think is right! I do not engage with people that I feel are being hateful! I do what I feel is right. I do not lie; I believe that being honest is very important! Being honest is something my mother taught me when I was very young. I still follow her teachings to this day!

I got involved with the boycott of Driscoll's when I learned how the workers were being mistreated in the fields picking our strawberries and other foods. I have previously worked and marched with Cesar Chavez and the United Farm Workers! In the 70s, I got involved in many other human rights actions; too many to remember. I got to meet and know Drew Glover when he was running for Santa Cruz City Council in 2016, when I did some photography for him and his campaign. I also got to know others that were involved in Santa Cruz political projects. I have always felt for the people that have become homeless, and even found myself homeless a few times, although I never had the need to take any of the things offered to the homeless. Back then you could quietly sleep in your van on the streets of Santa Cruz without being harassed. I know things have changed a lot, and there are many more people without homes. I know a lot of people have been priced out of their homes in Santa Cruz. Many of my friends have had to move away from our beautiful town because they could no longer afford to live here due to the exorbitantly high rents!

Most recently, I became involved with what I feel was the wrong, and hateful, movement to oust Drew Glover and Chris Krohn, after I was approached at Whole Foods by a man canvassing for the recall. The man told me that Drew and Chris were not helping the homeless, or the homeless problem. I told the man that I didn't feel that was the truth, and that I felt they were doing what they could for both sides concerning the problems that we have here in Santa Cruz. He seemed to accept my feelings, and I went on into the store. But later, what really got to me, and made me want to document the situation, was after I was approached a second time. This time, a woman canvassing for the recall told me, "Drew Glover and Chris Krohn were responsible for two deaths at the Ross Camp!" (I documented the actions when the camp was being closed!). The woman and I had a civil conversation. I asked her if she was doing this for money, and she told me that she was getting paid, but that she believed in the recall. I told her to, "have a good day" and she replied the same to me. But then I really started thinking, why are these people having to be dishonest just to get signatures on their Recall petitions? So I decided to get more involved by documenting what I felt were the wrongs that were being done. Because of this, I began being threatened, harassed, followed, taunted and even had the police called on me for taking pictures of those who were aggressively getting signatures by telling falsehoods.

I'd like to add that since some folks want to criticize my writing and punctuation, that I have never been a writer, but I have been a photographer for most of my 78 years! Yes, I have done a lot of photojournalism, but never proclaimed to be a writer. Writing is the hardest part for me! I have written things to go with my photos, and now I'm being ridiculed! I'm alright with criticism, but it's the hateful remarks that I don't feel are necessary.

I will not argue with those posting what I consider to be hateful comments, which is why I am making this post about myself. You don't have to like me or what I say. But why people choose to say hateful things is beyond me.

I pray for my friends, those without housing, for those in war-torn countries, for those who are being mistreated in any way, and yes I pray for the haters! May we all learn to live with one another, take care of those in need, and all learn that this is our only home, and it's all of our homes, Our Earth Mother.
Add Your Comments
Support Independent Media