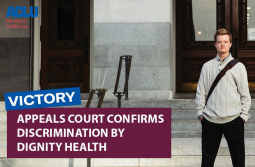 SAN FRANCISCO, September 18, 2019 — The Court of Appeal on Tuesday confirmed that it is illegal discrimination for a hospital to deny someone care simply because they’re transgender, allowing a lawsuit filed against Dignity Health to move forward.

Plaintiff Evan Minton was scheduled to receive a hysterectomy at Mercy San Juan Medical Center, a Sacramento-area Catholic hospital in the Dignity Health chain. Two days prior to the appointment, a nurse called to discuss the surgery and Minton mentioned that he is transgender. The next day, the hospital canceled the procedure.

“When his surgery was cancelled, he was subjected to discrimination,” the Court of Appeal ruled in its opinion. “Full and equal access requires avoiding discrimination, not merely remedying it after it has occurred.”

As Minton requested, the case will now return to San Francisco Superior Court to go through the normal process of discovery. Minton will be able to gather and present evidence proving that he was illegally denied health care because of his gender identity and documenting the harm he suffered as a result of the discrimination.

“The Unruh Act promises full and equal access to public accommodations, yet Dignity Health refuses to provide necessary care to transgender patients,” said Elizabeth Gill, a senior staff attorney with the ACLU of Northern California. “We will continue to fight for the right to care for everyone, even if their local hospital has a religious affiliation.”

Dignity Health is one of the largest hospital providers in California. It recently merged with another Catholic hospital chain to create the largest nonprofit healthcare system in the country. 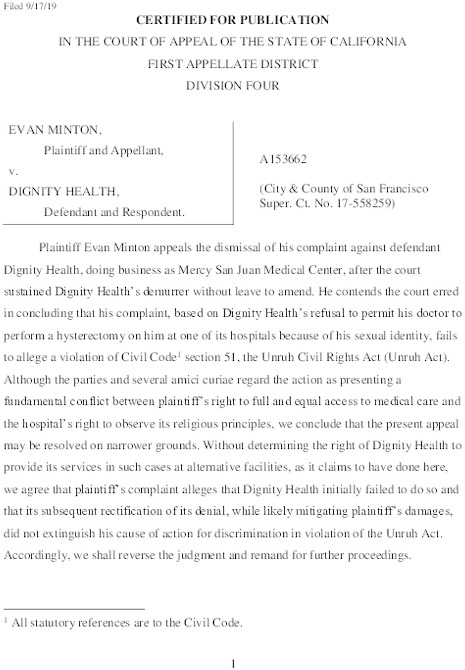 Download PDF (193.9KB)
https://www.aclunc.org/
Add Your Comments
Support Independent Media
We are 100% volunteer and depend on your participation to sustain our efforts!