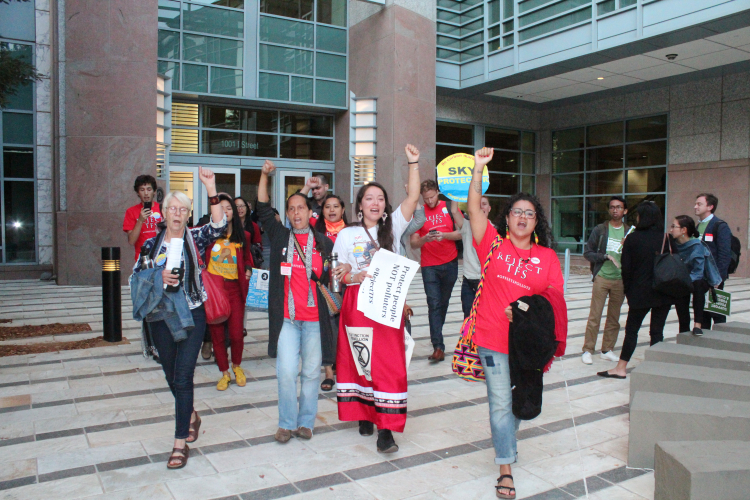 original image (5184x3456)
Sacramento — While California officials and many media outlets constantly promote the myth that the state is the nation’s “green leader,” the on-the-ground reality is much different.

In reality, California has the nation’s dirtiest air, some of the country’s dirtiest crude oil and some of the least restrictive regulations regarding fracking and oil drilling. Despite the persistence of the “green” California myth, Governor Jerry Brown’s oil and gas regulations approved over 20,000 new oil and gas permits in the state and this expansion has continued under Governor Gavin Newsom.

To make things worse, California under Brown and Newsom controls four times the number of offshore oil and gas wells in state waters under existing leases that Trump controls in federal waters.

If it that wasn’t bad enough, in the lead up to the U.N. Climate Summit and Youth Climate Strikes, a new report from the national advocacy organization Food & Water Watch identifies at least seven new fracked gas-fired power plants proposed for development in California.

“Corporations are planning seven additional unneeded gas-fired plants for California,” the report revealed. “For years, California regulators have approved, and utilities have built, unnecessary and expensive gas power plants. Driven by deregulation, these facilities are useless given declining energy demands in California over the past decade.”

This proposed deepening of reliance on fossil fuels in the state directly opposes California’s goal of 100% renewable energy by 2045, according to the group. “The new report, California Leads: How to Break Fossil Fuel Dependence in the Golden State, details the web of fossil fuel infrastructure - including 298 gas-fired power plants and 100,000 miles of oil and gas pipelines - currently engulfing the state, and the alarming proposed expansion of this network,” according to a Food & Water Watch press release.

“Existing fossil fuel operations mean that California is second only to Texas as an emitter of climate polluting greenhouse gasses. And the state has issued 2,383 new drilling permits since the beginning of the year,” the group said.

The report says that driven by energy deregulation, California has overbuilt gas power plants, even though energy use has declined over the last decade and the price of renewable energy is rapidly dropping. “Most of this toxic infrastructure is located in the most vulnerable neighborhoods—in low-income communities of color near homes, schools and parks,” the group stated.

The report also reveals that California also routinely allows oil companies to inject toxic wastewater into the ground, in violation of the Safe Drinking Water Act. Between 2017 and 2019 regulators granted as many as 39 aquifer exemptions allowing such injections. Some counties even allow oil companies to sell wastewater to farmers to irrigate crops.

The report states, “While most oil production occurs in the San Joaquin and Los Angeles Basins, the industry also drills throughout California’s central coast, from Ventura to Monterey County. In recent years, California has been dominated by dangerous new oil extraction technologies, including hydraulic fracturing (“fracking”), matrix acidizing and steam injection. Today, there are over 80,000 active oil and gas wells in the state. California is the seventh- largest producer of crude oil, and as of 2018 it had the third most oil-refining capacity of any state. Fossil fuels are everywhere.”

“More troublingly, oil and gas operations harm the most vulnerable Californians, especially lower-income people and people of color. In 2014, nearly 14 percent of Californians, primarily people of color, lived within a mile of at least one well. And the closer people live to drilling, the higher is their potential exposure to hazardous pollutants that increase the risk of respiratory and neurological problems, birth defects and cancer In Los Angeles, the communities closest to oil development suffer from headaches, asthma and nosebleeds.22 Drilling in California happens close to homes, hospitals and schools,” the report reveals.

The report notes that while running for office, Governor Gavin Newsom promised to move California away from polluting fossil fuels to renewable energy. Newsom also pledged to close down the Aliso Canyon gas storage facility—the site of the worst gas blowout in U.S. history—and to ‘‘oppose fracking and other unsafe oil operations.” Since taking office, Gov. Newsom has yet to take action on those promises, Food and Water Watch pointed out.

But California Leads: How to Break Fossil Fuel Dependence in the Golden State shows that the governor has the authority to order regulators to take many of the actions he promised on the campaign trail—authority that would be strengthened by declaring a climate emergency.

You can read the report by going to the links here: https://www.dailykos.com/story/2019/9/18/1886231/-New-Report-Reveals-that-Green-California-seeks-to-Expand-Oil-and-Gas-Operations

Food & Water Watch State Director Alexandra Nagy says such an emergency is necessary to protect the health and safety of Californians.”

“Declaring a climate emergency would allow Gov. Newsom to order regulators to take the steps that he promised on the campaign trail. Families living near dangerous oil and gas operations need decisive actions, not empty promises,” said Nagy.

What Can Newsom and California Officials Do?

The report’s key Recommendations are:

Stop issuing new fossil fuel permits in California immediately, ban fracking and develop a plan to phase out fossil fuel production; immediately imple- ment measures to protect people and the environment until the phase-out is complete.

Develop a plan for a fair and just transition to 100 percent clean, renewable energy in California by 2030.

Nagy said that these are steps Newsom can “take immediately. Families living on the front lines of oil and gas development say there is no time to waste.”

“My family and my neighbors have suffered with headaches, nosebleeds and breathing problems—even cancer—for almost four years since the Aliso Canyon blowout,” said Food & Water Action volunteer and Porter Ranch resident Dierdre Bolona. “Our governor needs to come to our community, look us in the eye and order those gas storage fields closed. He needs to protect Californians from oil and gas operations and from climate change fueled wildfires, mudslides and drought.”

Local Officials Call for Newsom to ‘Reign In’ Fossil Fuels

Local officials in communities near oil and gas operations are also urging Gov. Newsom to lead on reining in fossil fuels.

“As someone who represents a community that is directly is impacted by California’s oil addiction, I know how critical it is that Governor Newsom take bold action to move the Golden State off of fossil fuels,” said Meghan Sahli-Wells, Mayor of Culver City and Co-chair of Elected Officials to Protect California, whose district includes the Inglewood Oil field, the largest urban oilfield in the country. “In order to protect our people and public health, Newsom should demonstrate California’s environmental leadership and unleash an unprecedented jobs boom for workers in the clean energy sector. As the report explains, the governor has the ability to halt permits for new wells, ban fracking, and institute a 2500 foot setback to protect communities. We’re looking to him to make these things happen.”

California nurses are also sounding the alarm on the health impacts of drilling.

"As public health professionals on the front lines, nurses understand the very real health impacts of fossil fuel production and climate change, noted Zenei Cortez, Co- President, California Nurses Association. “As the earth rapidly warms, disasters here in California and across the country are only going to get worse. That's why we're looking to Governor Newsom to show the world what climate leadership looks like by banning fracking, stopping all new fossil fuel projects, instituting safety buffers to protect communities, and rapidly moving California off fossil fuels.”

It is time for Governor Newsom to declare a Climate Emergency, said Russel Green of Progressive Democrats of America.

“We are living in the age of the climate emergency,” said Greene, Senior Strategic Advisor on Climate Policy for the organization. “We must deeply connect to that and focus on what that actually means – and what it requires of us. We can no longer allow ourselves the false comfort of pretending we have more time to gradually enact policy. With each day we linger, we cause more harm, more suffering. Governor Newsom holds office in this final window of opportunity. No one else is coming. He holds the power to release America and the world forward, towards truth."

California Leads: How to Break Fossil Fuel Dependence in the Golden State is a “comprehensive look at the state’s oil and gas economy, that pulls back the curtain on California’s green image.  It details the state’s dependence on fossil fuels and makes common-sense recommendations to quickly move California into a clean, renewable energy future,” summed up Food & Water Watch.

The authors of the report deserve a huge round of applause for comprehensively explaining how California’s oil and gas reality doesn’t match up with its highly touted green image — and outlining recommendations that would help make the state live up to its “green” reputation.

I’m also very glad that Food and Water Watch updated the statistics on the oil industry in California. including the state’s status as the seventh-largest producer of crude oil, and as of 2018 the third most oil-refining capacity of any state in the country.

WHY Oil and Gas Drilling Has Expanded in California: Deep Regulatory Capture

To understand WHY California continues to expand onshore and offshore oil gas drilling as state officials constantly tout its green facade, one should also read my report on the capture of California regulators from top to bottom: California's Biggest Secret? How Big Oil Dominates Public Discourse to Manipulate and Deceive : http://www.dailykos.com/…

Environmental NGOs and media outlets including the LA Times, the Desert Sun, San Francisco Chronicle, Sacramento Bee, San Jose Mercury News, New York Times, Democracy Now, Mother Jones and others inexplicably still refuse to discuss one of the biggest West Coast environmental scandals of the past 20 years, in spite of its huge ramifications to this day: the capture of what passes for “marine protection” in California by the Western States Petroleum Association and other corporate interests.

In one of the largest and most overt conflicts of interest of the past 20 years, the President of the Western States Petroleum Association (WSPA), Catherine Reheis-Boyd, chaired the Marine Life Protection Act (MLPA) Initiative to create faux “marine protected areas” in Southern California from 2009 to 2012. (http://www.dfg.ca.gov/marine/mpa/brtf_bios_sc.asp). N

Photo: Isabella Zizi and Maria Xiomara Dorsey of Idle No More SF Bay (front middle and right) and other opponents of the neoliberal Tropical Forest Standard after CARB voted 7 to 4 on September 19 for the policy that will greatly harm Indigenous peoples by promoting carbon trading and tropical forest offsets. Much of California's "green" image is based on its environmentally racist, neocolonial cap-and-trade program that was written by Big OIl. Photo by Dan Bacher.
Add Your Comments
Support Independent Media
We are 100% volunteer and depend on your participation to sustain our efforts!