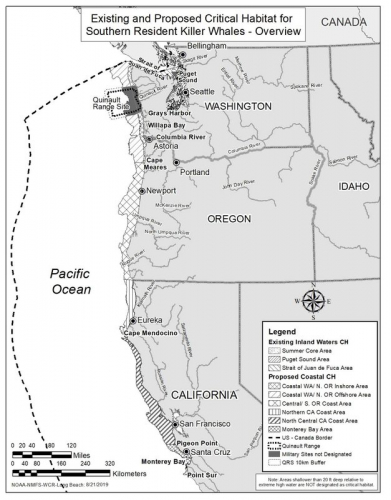 The rule follows an April 2019 court-ordered agreement after the Center for Biological Diversity sued the Trump administration last year for failing to issue habitat protections required by the Endangered Species Act.

“We’re happy these endangered orcas are finally getting the habitat protection they desperately need,” said Julie Teel Simmonds, an attorney at the Center. “Expanding orcas’ habitat protection will help save these extraordinary animals and their prey from pollution, harassment and habitat degradation. Orcas are in crisis, and we need quick, bold actions to ensure their survival.”

The expanded critical habitat proposal covers important foraging areas, river mouths and migratory pathways along the Pacific Coast from the Canadian border to Big Sur, California. Added to the current habitat protections in Washington’s Salish Sea, the total designation would be more than 18,000 square miles of marine habitat.

While these orcas spend their summers in Puget Sound and the Salish Sea (areas protected as critical habitat in 2006), they travel extensively along the West Coast during the winter and early spring, congregating near coastal rivers to rest and feed on migrating salmon.

The Center petitioned in 2014 to better protect areas off the coasts of Washington, Oregon and California (see map). The Endangered Species Act prohibits federal agencies from authorizing activities that will destroy or harm a listed species' critical habitat. Animals with federally protected critical habitat are more than twice as likely to be recovering as species without it, a Center study found.

The Center has two other pending lawsuits against the administration to protect Southern Residents. A lawsuit filed in April seeks updated analysis of how salmon fishing is harming the orcas and one filed in August to establish a “whale protection zone” in the heart of their Salish Sea habitat where boat traffic would be restricted. 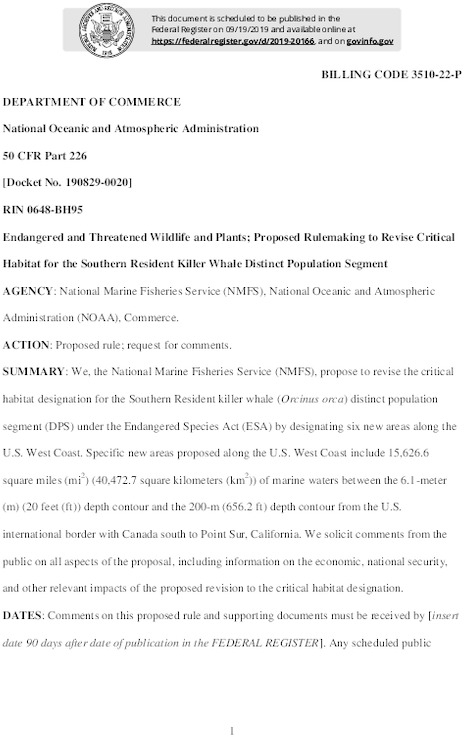 Download PDF (1.3MB)
https://www.biologicaldiversity.org/
Add Your Comments
Support Independent Media
We are 100% volunteer and depend on your participation to sustain our efforts!