Newswire
Calendar
Features
Home
Donate
From the Open-Publishing Calendar
From the Open-Publishing Newswire
Indybay Feature
Publish to Newswire
Add an Event
Related Categories: Santa Cruz Indymedia | Government & Elections
Recall Canvasser Detained by Police at Whole Foods for Threatening and Harassing Staff and Customers
by Alex Darocy (alex [at] alexdarocy.com)
Tuesday Sep 17th, 2019 10:48 PM
A Santa Cruz United recall signature gatherer was handcuffed and detained by Santa Cruz Police at Whole Foods Market on September 10 for harassing and threatening customers and management, and for blocking the entrance to the market repeatedly, according to Whole Foods management and police. The man was eventually released without arrest, after he agreed to move away from the market's entrance to the Whole Foods "free speech zone", which he did. He then began to aggressively solicit signatures in the parking lot, at times running up quickly to arriving cars. Eventually he moved in front of the Rite Aid entrance, which is located next to Whole Foods. [Top video: A Santa Cruz United canvasser is handcuffed and detained at Whole Foods Market in Santa Cruz.]
Copy the code below to embed this movie into a web page:
Download Video (466.0MB) | Embed Video
The canvasser delivered the same few lines for all those he approached, asking if they would like to sign the petitions to recall Councilmembers Chris Krohn and Drew Glover, because they are "bad for the homeless". The claim has been repeated by a number of Santa Cruz United canvassers, as reported on Indybay and elsewhere. The approach has been widely denounced by supporters of the progressive Councilmembers, who say the claim is disingenuous, and point to both Glover and Krohn's voting record on the City Council, where the two have been the most vocal advocates for the homeless, and have put forth more proposals for expanding homeless services than the other Councilmembers.

After releasing the canvasser, the police officer spoke briefly in private with the Whole Foods Manager inside the front of the market. In an interview with the manager after the officer left, she said the canvasser had called her the n-word, and that he said it "under his breath" to her (it should be noted that she is white).

After sharing stories with her husband about her interactions with this signature gatherer, the Whole Foods manager said he fears for her safety. However, she was firm in stating the canvasser's threats will not change how she does her job.

She also added that it was "too bad" the recall canvassers were not engaging people in a "knowledgeable debate" on the issue, as opposed to employing an aggressive technique with community members.

It is clear in the video posted above, that the police officer heard the canvasser being asked if he had called the Whole Foods Manager the n-word, and the officer responded, "he called her a lot more than that". The officer can also be heard stating on the video that the recall canvasser was detained for "harassing and threatening".

When interviewed, the canvasser denied calling the manager the n-word. He denied any wrong doing whatsoever. In the video, the officer spoke about an arrest "warrant" that was active on the canvasser, but after being released, the canvasser explained that it was for an unpaid traffic ticket. The police officer left fairly quickly.

When asked what his name was, the canvasser said it was "Rob Baltimore", however he was calling himself "Michael" when approaching random people to sign the petitions. He said he had been working as a petition signature gatherer for 14 years, and that he was able to get a very large number of people to sign the Santa Cruz United recall petitions. When questioned, he claimed to be a registered voter in Santa Cruz. Later he admitted that "Rob Baltimore" was not his real name.

When he approached one person for signatures, who was on their way into Rite Aid, the person asked the canvasser if he was being paid. The canvasser replied, "no, I am not".

The canvasser was with a person he described as his "son". At one point the son said he was 22 years old. At another point he implied he was underage. In the video, the canvasser apologized to his son for the incident with police, and indicated to the officer he was doing it all for the son. Both the father and the son possessed clipboards that held small stacks of the recall petitions, along with some Santa Cruz United literature. The two of them possessed three or four clipboards in total. The father held two and the son held one or two, however the son stood by without ever approaching people, or collecting signatures, while his father did the work. This may have been because they were being closely observed.

According to reporter Autumn Sun, who wrote a recent article published to Indybay about his encounter with two different aggressive recall signature gatherers at Whole Foods on September 5, Rite Aid's policy with regards to the canvassers is the same as Whole Food's. A Rite Aid employee told Autumn Sun that they have had to chase away the signature gatherers from blocking the front door to the store a number of times, but that the canvassers keep returning.

Following the publication of the photo and the above video of the recall canvasser's detainment at Whole Foods on September 10, a number of individuals on social media commented about their interactions with the man. Here the comments of five different people:

1. "By sheer coincidence I was walking out of Whole Foods as the very scene you photographed was just unfolding. (The video you show was apparently taken a few minutes later, after things calmed down.) I have to say, as an un-involved observer, that when I cam out of the store the signature gatherer was doing everything he could to be as obnoxious and confrontational as possible, practically demanding to be arrested while claiming his rights were being violated. He was standing directly at the front door entrance to Whole Foods, and the policeman's efforts to have anything resembling a calm or at least civil discussion about not blocking the entrance were continuously thwarted by this man shouting insults & legalistic demands into the policeman's face from two feet away. (For the record, I had already signed the petition he was promoting -- except when I signed it a couple of days earlier, it was being circulating by a woman sitting at a chair at the edge of the parking lot about 25 feet from Whole Food's entrance, causing zero problems for customers or Whole Foods, and sparking zero intervention from anyone.) All in all, the more recent event was a very discouraging example of democracy gone awry."

2. "This dude was an asshole talking shit to people."

3. "What I've learned from witnesses is that he was calling folks names."

4. "I noticed the same man at Trader Joe’s and caused such a Rucus myself that he was so embarrassed that he left because he couldn’t get any signatures. He claimed to be getting signatures for rent control."

5. "We've been harassed by these guys, too, following us and arguing after we don't sign and tell them we object."

"Our tablers are 100% volunteers, and I know that because I organize them and assign them," Polhamus wrote.

In public statements made on social media on September 11, following the detainment of the canvasser at Whole Foods, Polhamus claimed the incident was staged, and called the initial article published on Indybay about it, "fake news".

Polhamus explained, "I have been tabling at Whole Foods myself every week for eight weeks, almost on a daily basis. If there was a problem I am sure the management, who I have come to know pretty well, would have mentioned it."

When asked if the canvasser in the video was paid to gather recall petition signatures, Polhamus stated, "I help staff the tables with volunteers, as I said to Drew Glover, and I am often at the table with the volunteers. I have hired no one. I have paid no one. I am not paid, I am a volunteer."

When pressed on the issue of paid signature gatherers, Polhamus refused to comment further.

On September 17, the canvasser detained at Whole Foods in the above video was seen collecting signatures again for Santa Cruz United at Trader Joe's in downtown Santa Cruz. 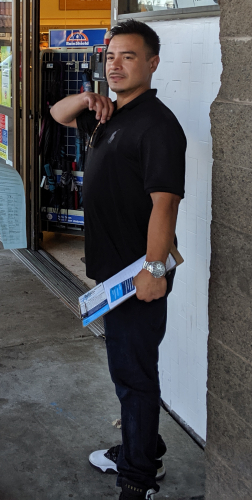 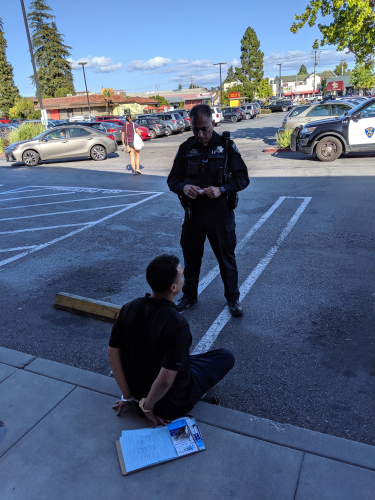