Add an Event
Newswire
Calendar
Features
Home
Donate
From the Open-Publishing Calendar
From the Open-Publishing Newswire
Indybay Feature
Publish to Newswire
Add an Event
Related Categories: San Francisco | Health, Housing & Public Services
Kaiser Bosses STOP Killing Peri Ho! Family & Supporters Speak Out At SF Kaiser
by Labor Video Project
Tuesday Sep 17th, 2019 11:53 AM
A press conference was held at San Francisco Kaiser by Kin Ho to defend the life of his wife Keri Ho who Kaiser refuses to to get a second opinion on her healthcare. San Francisco Kaiser management according to Kin Ho has also retaliated against him and his wife for following complaints with the California Department of Managed Healthcare. 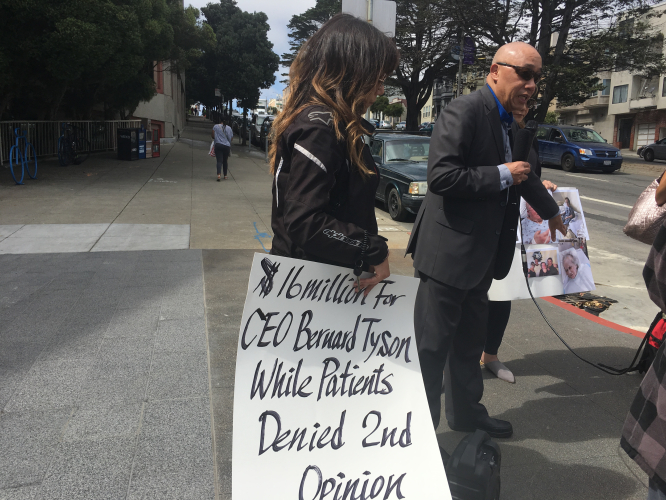 original image (4032x3024)
Kin Ho, the husband of SF Kaiser patient Keri Ho spoke along with his family at San Francisco Kaiser Hospital on September 16, 2019, about the refusal of Kaiser management to allow his sick wife from getting a second opinion on her medical condition.

According to Ho, Kaiser has not only misdiagnosed her condition but has retaliated against him and Keri for the filing of complaints with the California Department of Managed Health Care DMHC.

He also reported that Kaiser has refused to provide mental healthcare to his wife although this is required by US and California law.

Part of the retaliation against his family is that Kaiser management is now billing him for all care which now amounts to more than $99,000.

He called on Governor Gavin Newsom who he personally knows to order Kaiser to follow the law and provide his wife with a second opinion.

The press conference which was called by United Public Workers For Action UPWA.info also raised the issue of the lack of staffing as a result of cutbacks. San Francisco Kaiser has gained over 200,000 members as a result of Obamacare but it has not hired enough healthcare workers to care for the new members as its profits have exploded.

They also now have a $21 billion surplus as a result of profiteering and cutbacks on care for patients.

Kaiser has been fined millions for refusing to provide mental healthcare causing some patients to commit suicide. Kaiser CEO Tyson also makes over $16 million a year and 36 Kaiser executives make over $1 million each. 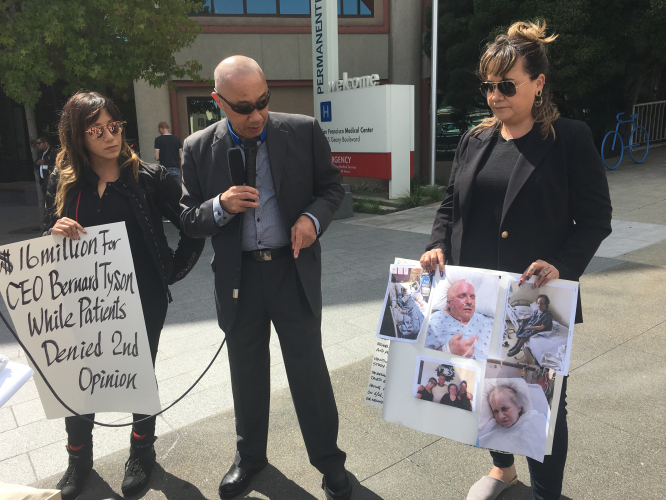 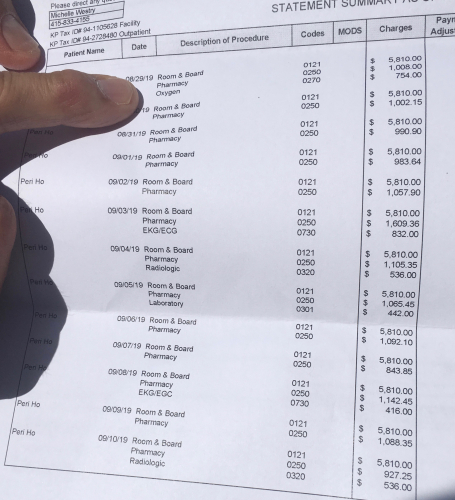 original image (2539x2787)
Kaiser management is now charging the Ho family for oxygen, x-rays and other medical treatment despite the fact that they have health insurance.
https://youtu.be/b_ESZtL6jU8
§Department of Managed Health Care Ruled Against Kaiser
by Labor Video Project Tuesday Sep 17th, 2019 11:53 AM 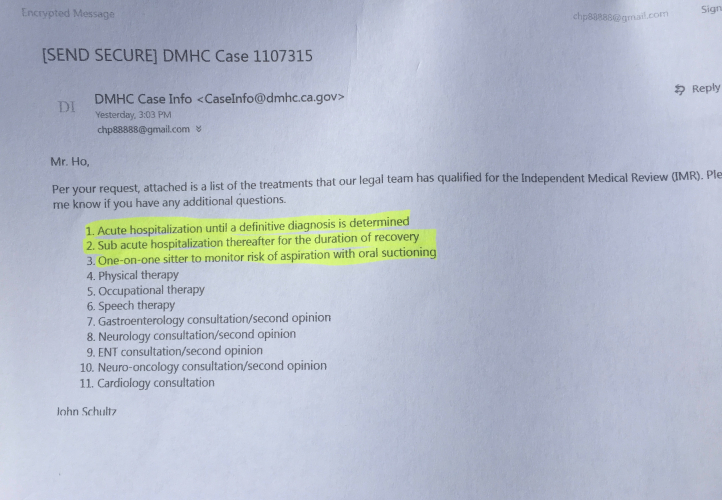 original image (3814x2641)
Despite the fact that the California Department of Managed Healthcare has ruled against Kaiser it still refuses to. follow the ruling.
https://youtu.be/b_ESZtL6jU8
§Family Member Kin Ko Points To Picture of Wife
by Labor Video Project Tuesday Sep 17th, 2019 11:53 AM 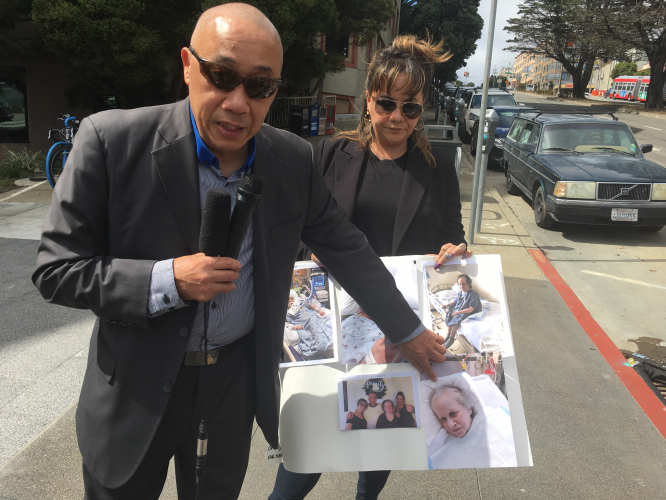 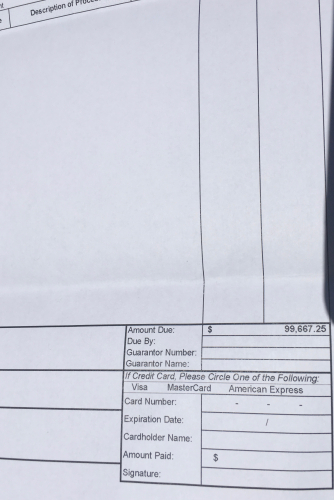 original image (2438x3643)
Kaiser management has now charged the Ho family over $99,000 for healthcare which they are already paying for through their healthcare insurance company.
https://youtu.be/b_ESZtL6jU8
§Kaiser CEO Bernard Tyson Contacted By Kin Ho About Care For Keri
by Labor Video Project Tuesday Sep 17th, 2019 11:53 AM 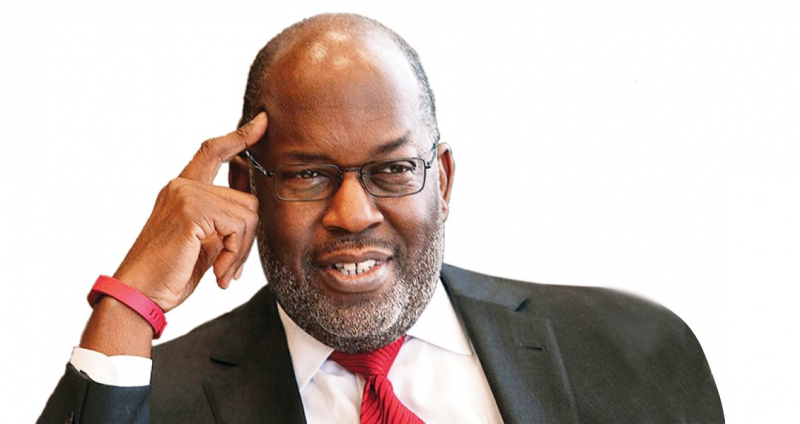 original image (1131x600)
Kaiser family member Kin Ho contacted Kaiser CEO Bernard Tyson who is paid more than $16 million a year about the issues regarding the treatment of his wife Keri and the need for a second opinion on her treatment. He never heard from Tyson.
https://youtu.be/b_ESZtL6jU8
Add Your Comments
LATEST COMMENTS ABOUT THIS ARTICLE
Listed below are the latest comments about this post.
These comments are submitted anonymously by website visitors.