Add an Event
Newswire
Calendar
Features
Home
Donate
From the Open-Publishing Calendar
From the Open-Publishing Newswire
Indybay Feature
Publish to Newswire
Add an Event
Related Categories: Santa Cruz Indymedia | Government & Elections
Tabling for the recall of Drew Glover and Chris Krohn today, Saturday 9-14-2019
by AutumnSun (sunclan007 [at] yahoo.com)
Saturday Sep 14th, 2019 8:42 PM
Things seemed pretty civil today! I believe that following my report of 9-5 2019, where police were called by the two people getting signatures that objected to me taking their pictures, and had called the police on me, the police found me within my legal rights! Also, civil compared to Alex Darocy's report on 9-10-2019, regarding Whole Foods having to call the police on a man who was getting signatures, who had called the Whole Foods manager racial slurs and also threatened Alex! 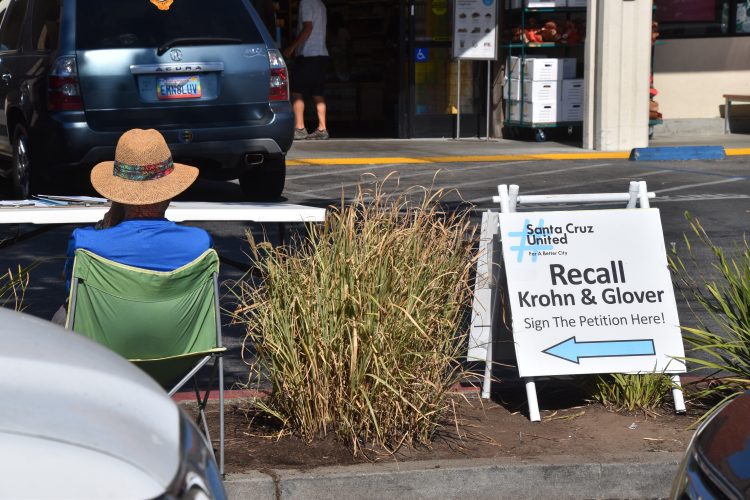 original image (6000x4000)
Today I went to four of five locations where Santa Cruz United set up. I can say they really cleaned up there act more than last week. They only had people tabling. I found that they did not seem to be getting many signatures, though.

I have been told by one of them that they need about 2500 more signatures by October 22, 2019 to get the recall on the ballot. I first went to Whole Foods on Soquel Avenue. There was a man sitting at a table with a sign, and I stayed for about thirty to forty minutes. I did not see one person even approach him!

I then went to the soccer field at Harvey West Park, but only stayed for ten to twenty minutes because there was nowhere to park. There I saw only one person sign.

From there, I went to the Surfer's Statue on West Cliff Drive. I stayed there for about thirty to forty minutes, and only one person drove up to sign the petition while I was there.

After that, I went to the West Side Farmer's Market. While there, I met a polite woman sitting at a table, and I questioned her regarding the petition. She told me that it was to recall two City Council members that had bullied other members of the council, and how they had voted to keep the Ross Camp open. She told me that there are six neighbor groups trying to get signatures to see whether to keep Chris Krohn and Drew on the City Council. She told me that they did not create the Ross Camp, but that they had voted to keep it open against the advice of the Fire Department Chief, and the Santa Cruz Police Chief. The woman said Ross Camp was dangerous, and that one of them had gone to court to testify against the city in a lawsuit that was put forward by some of the homeless representatives to keep the camp open. She then went on to say that they wanted to put homeless camps in City Parks, and that they did't think that would be a good idea. She said they feel that there should be a controlled facility where people can have a sustainable place to live with showers, laundry facilities, and not to just let people camp wherever they are, unsafe, not clean, and without services.

She then went on to tell me that the Mayor and three other women on the City Staff accused the Councilmembers of bullying, and that they filed charges against them. She was then interrupted by a woman wanting to sign the petition. She went on to say that two charges were founded, and that is the reason they are trying to get enough signatures to get it on the ballot so people in the city can vote on it.

I asked her, "if you want to want to get rid of them, who are you going to replace them with?" She then gave me a card and told me if I wanted more information I could go on their web site.

She said that she is at this location every Saturday.

I asked her, "are you saying they bullied someone," but she interrupted me and said, "yes they bullied and harassed the Mayor and a City Council member that is a lady, along with three City Staff members, and that they all filed charges!

She told a man who came up to get a voter registration card that he had until the 20th. She then said that if one person that signs brings one other person to sign, "we will have enough." She again stated that she is, "here every Saturday," and at Whole Foods every Saturday and Sunday.

When asked by a man how many more signatures they needed, she told him about 2500 more, totaling 8500 signatures by October 22.

"A lot of people have not heard about this, so we're getting it done," she said.

I asked her if both Councilmembers were charged with bullying and harassment, and she replied, "yes, they have been charged."

She said they looked at 13 different charges, and there were three different things they could do. She feels that if there is that much of a problem, they are not going to be able to get stuff done, fighting and bullying.

She introduced herself as Carol, and I said my name is Sunny. She thanked me for listening. I asked her how long she has lived in Santa Cruz, and she said about 40 years, and that she came from Miami. I thanked her for the information and asked if I could take her picture, and she said sure!

I then returned to Whole Foods, where I got a piece of vegan pizza and watched the tabler, now a woman, as she waited for people to come to her table. An elderly woman spoke to her for about ten minutes, but left without signing. I saw several people approach her table, but I only saw one person sign, even though I was there for over an hour. I did see two different people that seemed to hand her something from their wallets?

The first six pictures are from Whole Foods, the next one is from the Soccer Field at Harvey West Park, the next five are from the Surfer's Statue on West Cliff Drive, and the next two are from the Westside Farmer's Market. The last six are from my return trip to Whole Foods. All photos were taken between 10 am and 1:30 pm today!
§
by AutumnSun Saturday Sep 14th, 2019 8:42 PM 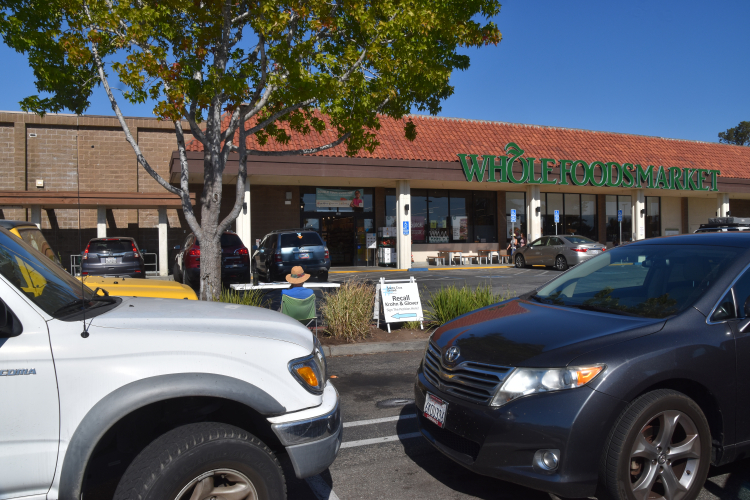 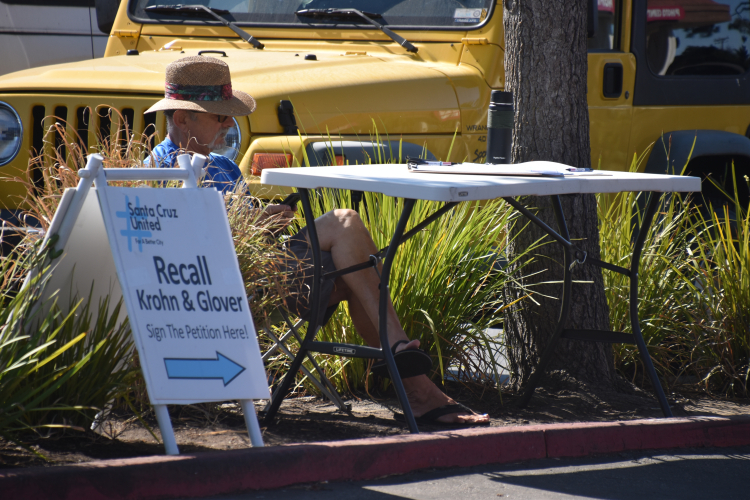 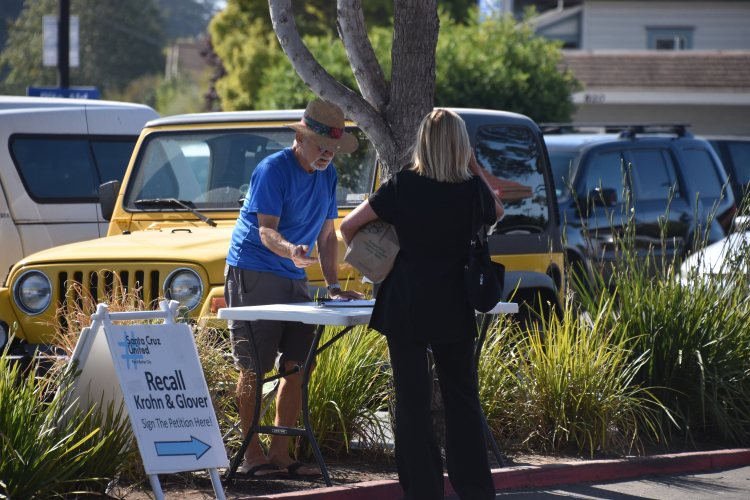 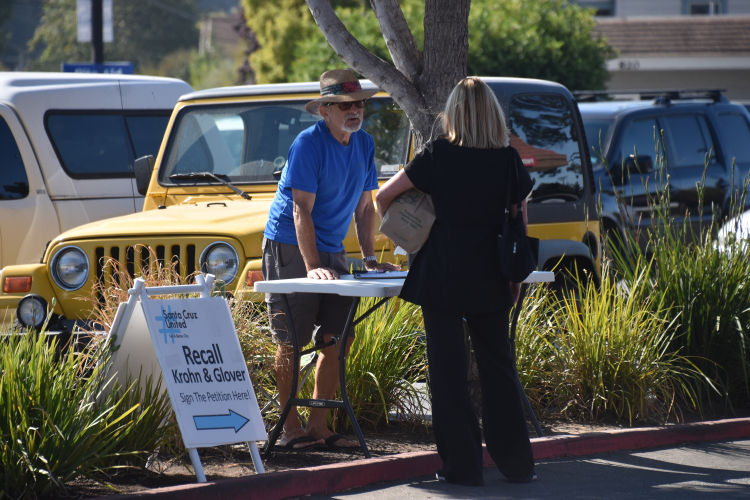 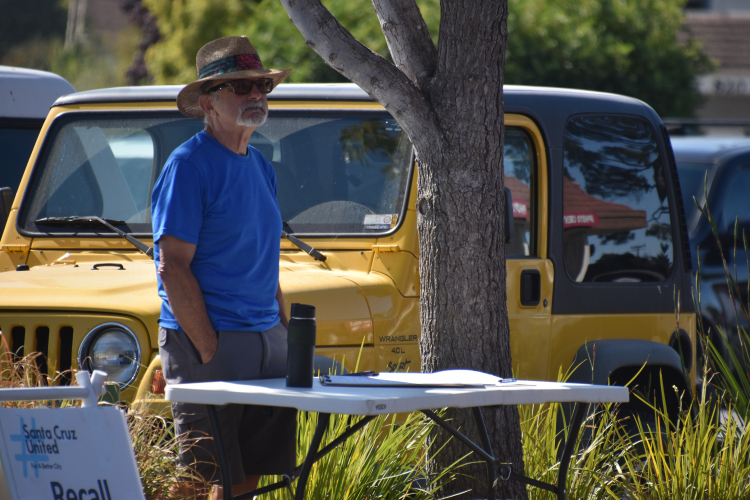 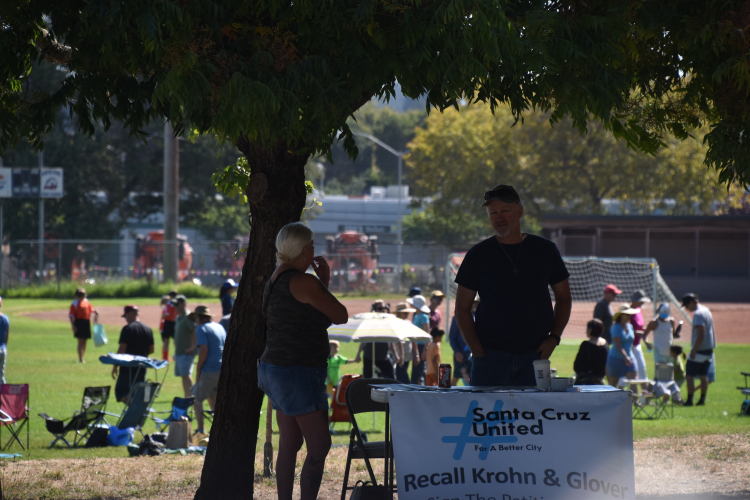 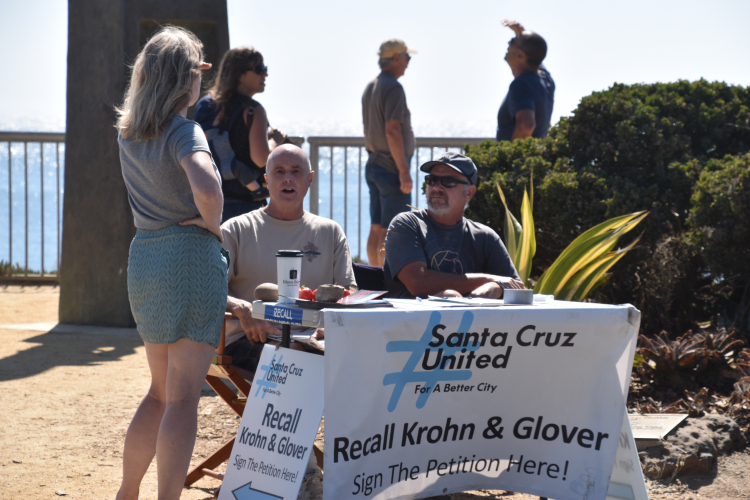 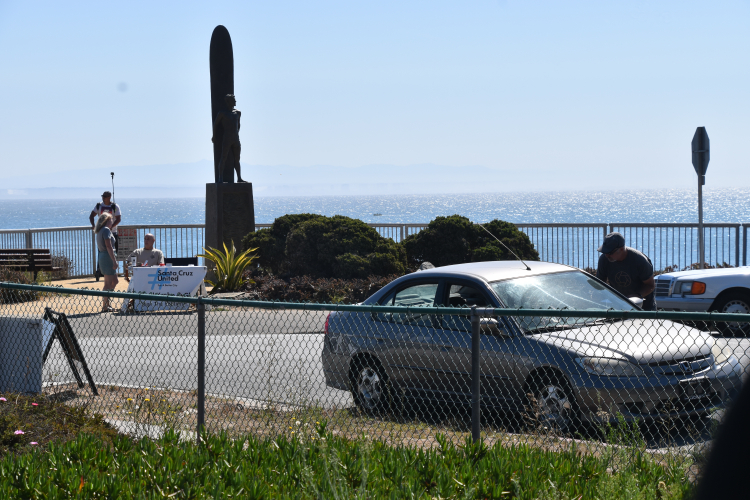 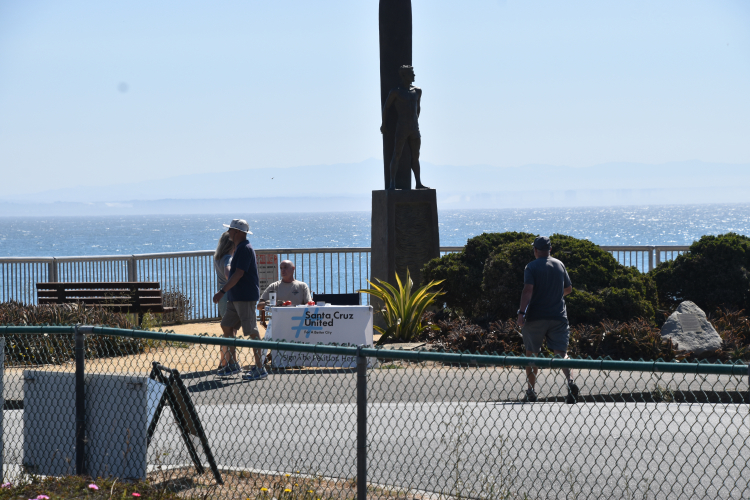 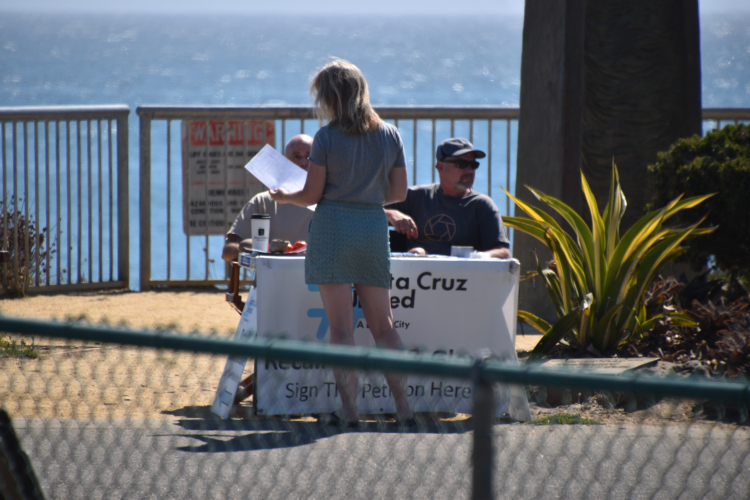 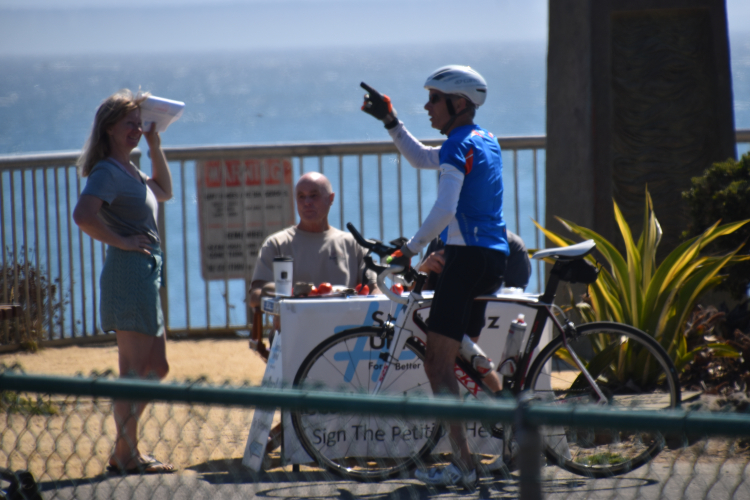 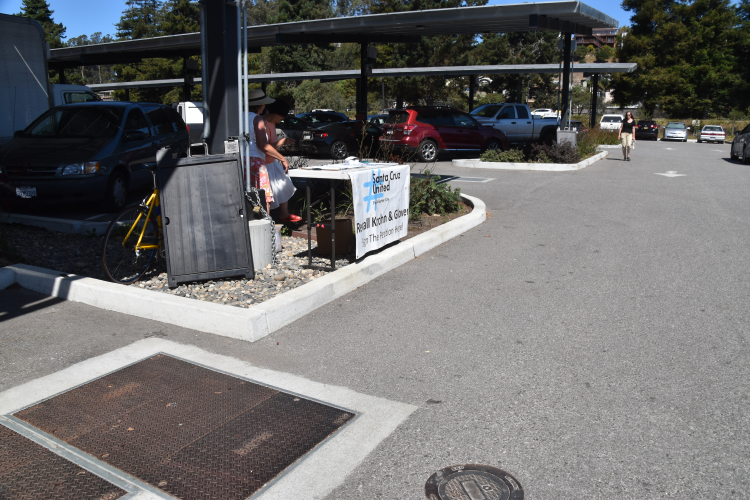 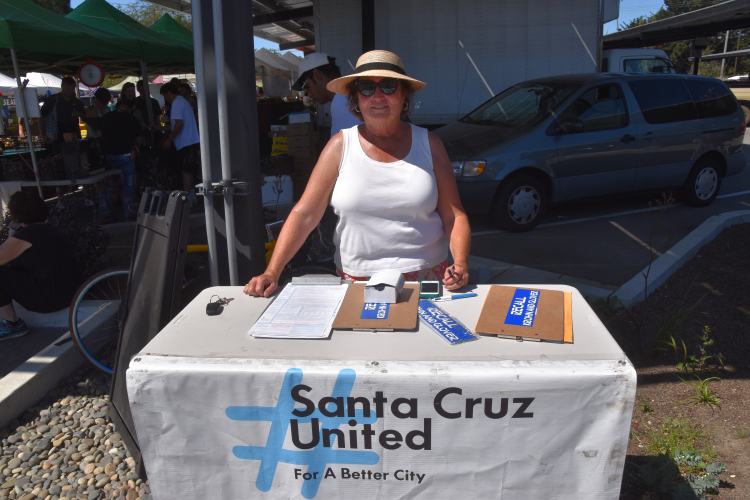 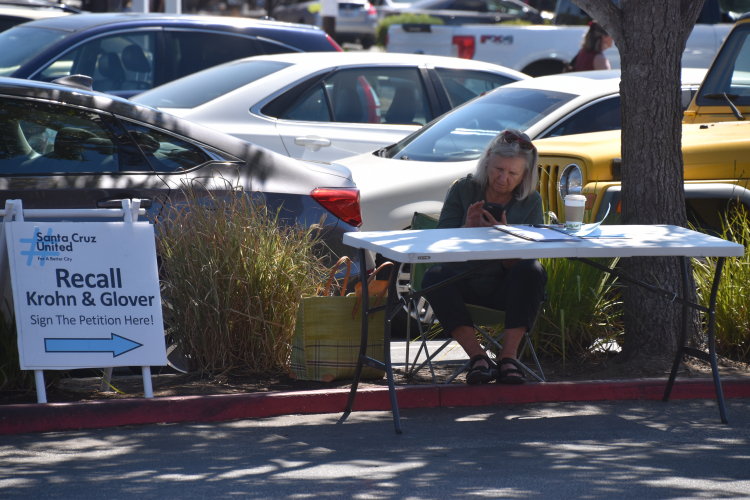 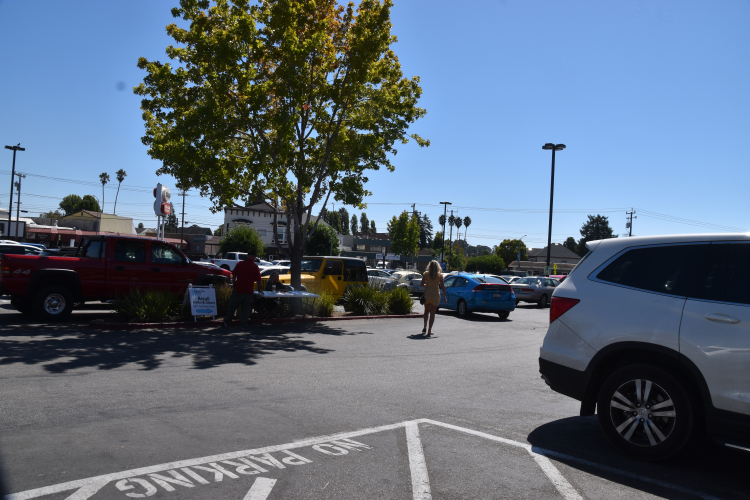 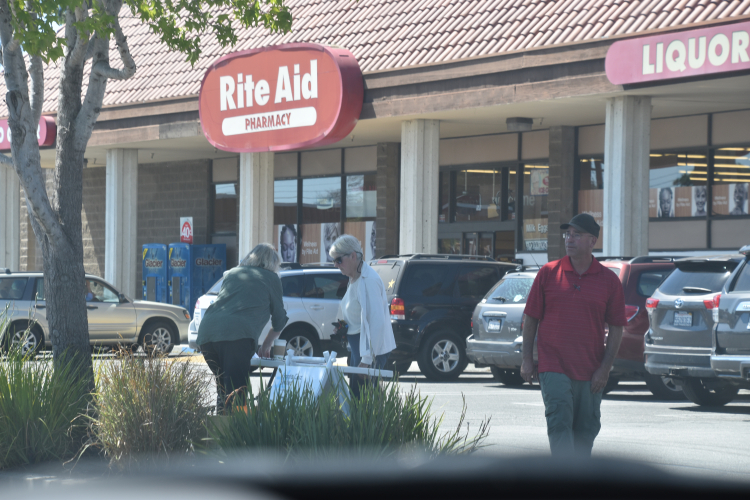 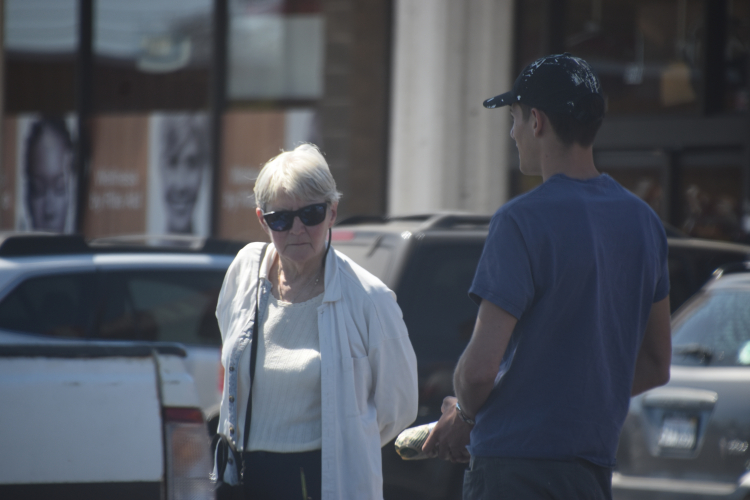 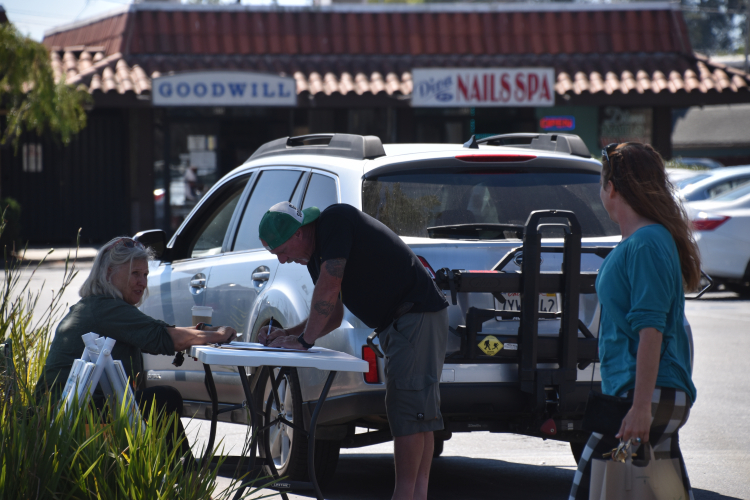 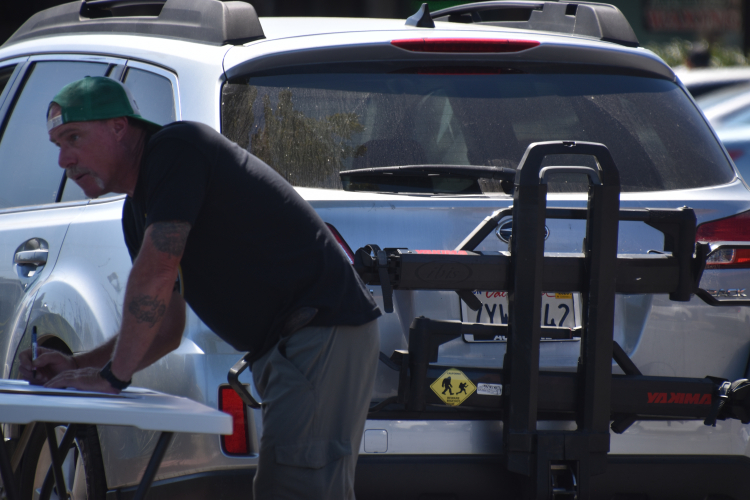