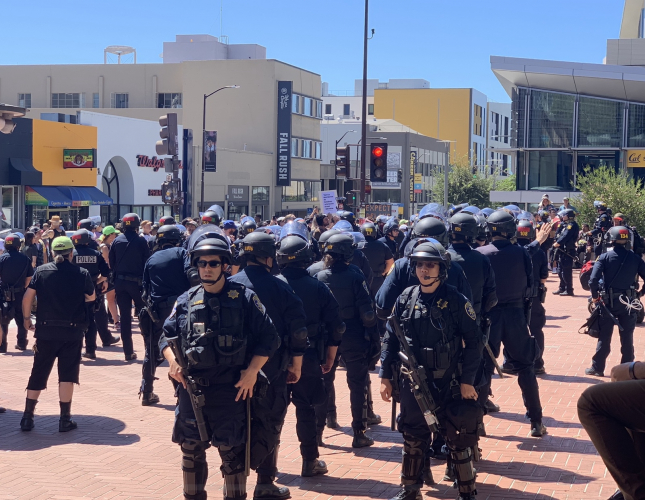 original image (1603x1242)
On Sunday, September 1, a small collection of bored and lonely far-right activists gathered in Berkeley, CA for what was dubbed the “Third Annual March Against Communism.” Despite the massive police presence and resources committed to protecting this tiny group of confused conspiracy theorists, community mobilization kept Berkeley locals safe and ultimately pushed back the far-right’s attempted advances.

Following their losing streak from the last two years and looking forward to their yearly public embarassment, organizers Amber Cummings and Lindsay Grathwohl urged followers to meet them at UC Berkeley’s Sproul Plaza on Sunday, September 1. From there, the plan was to collectively harass and terrorize a marginal leftist bookstore which they’ve credited as being the source of every “social problem” they’ve managed to identify, such as gender neutral restrooms and sex education.

The far-right slowly trickled in to the meeting point at Sproul Plaza wearing their fear on their sleeves. Right wing organizers instructed participants to avoid wearing “MAGA” (Make America Great Again) hats and other clothing indicating support for Donald Trump in order to avoid accountability from the local community. Despite their claim to be victims of a violent and terroristic communist conspiracy that controls every aspect of their lives, these far-right wingnuts were heavily protected by the liberal city and university managers who have continually facilitated fascist aggressions via unprecedented levels of resources and police power.

It’s not clear if organizers Grathwohl and Cummings truly believe the conspiracies they peddle about communism or if they merely understand it as a useful framework for hyping up supporters ahead of public meetups. It’s a losing strategy either way, as their attendance numbers dwindle every year. It’s like these organizers are still living in 2017 and never got the memo that big alt-right street demos are no longer viable.

Still, the far-right supporters that did decide to show up have consistently been some of the most aggressive and violent participants at right wing gatherings over the last few years. From Proud Boys that have fought up and down the west coast to Hitler-loving incels, Amber Cummings and Lindsay Grathwohl seem to have picked up quite a peculiar following.

In 2018, violent Proud Boy Rob Cantrall showed up in uniform with a small group of supporters to the same bookstore targeted by Cummings and Grathwohl. Cantrall threatened the employees of the store, telling them he planned to burn the store down. This incident is not isolated from the greater wave of far-right activity we’ve witnessed recently. Jacob Ku, a far-right activist based in Northern California and known to be very aggressive, was present both with Cantrall on the day he threatened to burn down the bookstore and with Cummings and Grathewohl on September 1. All of these people had been participants in harassing the same bookstore since 2017. The organizing tactics and rhetoric continually employed by Grathwohl and Cummings over the years is responsible for building up a real potential for deadly violence.

A mobilization of networks committed to defending the bookstore and locals was successful in pushing back against the far-right, which was denied space and never allowed to get close to the store. Ultimately, the far-right took a giant loss. Without knowing the area at all, the most they could manage was a march in circles around the UC Berkeley campus, protected by the police who were decisive in making the event even possible to begin with.

On social media, Lindsay Grathwohl and Amber Cummings say they plan to organize a march in Berkeley some time in the future, but have yet to share any details. We are committed to monitoring and mobilizing against these far-right and fascist individuals, as well as the larger structural white supremacy and patriarchy that they attempt to protect and maintain. 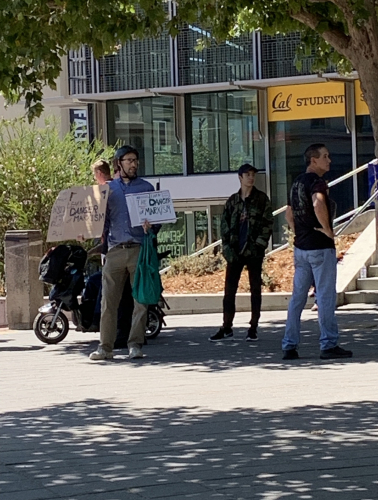 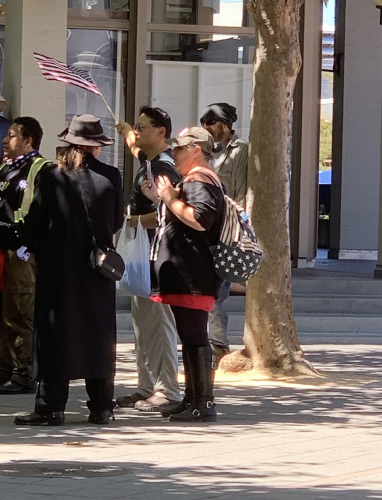