Newswire
Calendar
Features
Home
Donate
From the Open-Publishing Calendar
From the Open-Publishing Newswire
Indybay Feature
Publish to Newswire
Add an Event
Related Categories: Central Valley | Media Activism & Independent Media
Lies, Misinformation, Theft and Threats to Our Freedom of the Press
by Mike Rhodes (mikerhodes [at] comcast.net)
Friday Sep 6th, 2019 11:29 AM
The Community Alliance newspaper is an alternative/independent monthly newspaper in Fresno Ca. Photo below: Distributer Director Peter Maiden with the rack that caused a controversy between the Community Alliance and the City of Fresno. 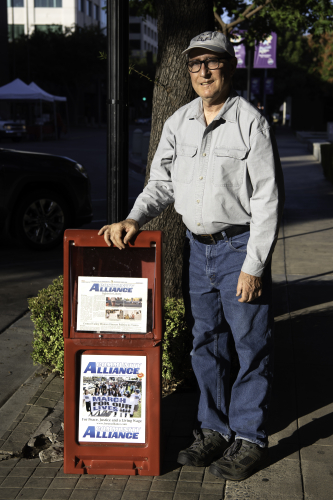 In May of this year, a Community Alliance newsstand went missing on the corner of Kern and N streets, just outside a Starbucks. Peter Maiden, the newspaper’s distribution manager, replaced it with another newsstand. Shortly after installing the new newsstand, he received an e-mail from Bret Conner, street maintenance superintendent with the City of Fresno, giving Maiden 48 hours to remove the stand.

Concerned about losing another newsstand, Maiden removed it before the 48 hours were up. We then asked Conner why he had taken our newsstand in the first place. I drove around downtown and took photos of numerous newsstands, just like ours, that were on the public sidewalk.

Conner said the reason our newsstand was singled out was that there had been a “complaint.” Not satisfied with that answer, we asked Conner if there was any Municipal Code or ordinances we were violating. He sent an e-mail that cited SEC. 13-202. - PERMITS TO DO WORK IN CITY STREETS REQUIRED and SEC. 13-219. - ENCROACHMENT IN A PUBLIC RIGHT-OF-WAY.
Some groups would have been intimidated by their government telling them they were in violation of the law. The normal thing is to not poke the bear with a stick. We chose instead to stand up for our rights.

We talked to Bob Navarro, an attorney with an interest in defending free speech, asking him what he thought about the situation. Navarro wrote “The ordinance that was cited by Bret Conner comes under the title CHAPTER 13 - SIDEWALKS, STREETS, PARKWAYS, AND UNDERGROUND UTILITY DISTRICTS, ARTICLE 2 - STREET WORK.

Thus, Ordinance 13-219 is really about an ‘encroachment’ by a business or other real property owner extending part of their business or holding out onto a sidewalk, for example, like a ‘push out’ for outdoor tables on the sidewalk. One obviously has to get a permit for that.

“It is not an ordinance about the maintenance of newsracks on sidewalks or public property. The Community Alliance was not ‘encroaching’ under this ordinance.

“It appears from my research that the City does not have an ordinance regarding the placement and maintenance of newsracks (nor does the County). The word ‘newsracks’ comes up only twice in the Code: Section 14-1408, which bars newsracks from being tied or attached to a parking meter, and Section 15-2705, which prohibits ‘adult oriented’ newsracks from displaying sex acts or genitals.”

Navarro said that “without an actual ordinance, I think the City has no authority to act against legitimate newsracks unless they can prove an existing public hazard.”

When we told Conner that we think we have a right to have our newsstands back on the street, he then told us that the complaint filed against us was that our newsstand was not compliant with the American Disability Act (ADA). He also suggested that perhaps if we applied for a permit they would consider it. Maiden talked to the person at the Fresno Bee in charge of newsstands, and she said they had never been asked to get a permit.

At this point I felt that the demands by the City of Fresno were disingenuous and that we needed to confront this threat to our right to distribute the Community Alliance newspaper a little more directly. If we don’t, the City of Fresno will win and free speech will die on the streets of Fresno with a whimper.

We asked Navarro to write a letter to the City of Fresno demanding them to give us a straight answer about our right to have a newsstand on the city sidewalk. A week went by and then another without an answer. Navarro called the city attorney’s office. He was assured they were working on it. Another week went by. Nothing.

We decided enough was enough and put the newsstand back in front of the downtown Starbucks. Shortly after that, we received a letter from Andrew Benelli, assistant director of the City of Fresno’s Department of Public Works, that essentially said we could return the newsstand to the corner of Kern and N streets.
He also acknowledged that they had taken the first newsstand, that they could not find it and if we wanted to we could file a claim with their Risk Management Division. We are in the process of filing that claim.

This is a clear and unambiguous story about how, if you stand up for your rights, you can beat City Hall. If you don’t, there are people who will steal your property, take away your rights and say they are doing you a favor.

In a previous incident, the Fresno County Library banned our newspaper from distribution in all county libraries. If we had shrugged and let them get away with it, readers today would not have access to the paper in any county library.

When I went to drop off papers at the Bullard branch a couple of years ago I was told that we could no longer distribute them there. I thought the librarian was joking, but she had more to say. When I continued, trying to put them in the usual distribution location, she said that the Community Alliance was too controversial. Again, I laughed and pointed out the shelves full of controversial books. I still thought she was just having some fun at my expense. It was not until she insisted that I talk to the head librarian that I realized this insanity was for real.

We had to take this all the way to the director of the library to clear up things. Of course, we won in the end, but the very idea of being banned from the library chills my bones to this day.

What is it about this newspaper that provokes such a response from the powers that be? If I were you, I would keep reading the Community Alliance to find out what the fat cats don’t want you to know and take this opportunity to subscribe, make a donation and/or support this newspaper any way you can.

Read banned books, and when your rights are threatened speak truth to power. You might also want to support your local civil rights attorneys and join the ACLU. In these dark times, we are all going to need a little help from our friends.
*****
Mike Rhodes was editor of the Community Alliance newspaper for 15 years, retired about five years ago and has just returned to be on the paper’s editorial board. Contact him at mikerhodes [at] comcast.net.

***
Further information about this issue:

Now is an excellent time to expand the Community Alliance newspaper’s distribution in downtown Fresno and throughout the region. We successfully fought off the threat by the City of Fresno (see story on this page) to remove our newsstand in downtown Fresno, and we want to take this opportunity to turn around these threats to our free press and distribute more papers than ever before.

Rather than just replace the one newsstand they stole from us, we are asking you to help us with the Community Alliance Free Speech Newsstand Fund. Your contribution will help us buy more newsstands and help increase the number of people reading this newspaper.

Each newsstand costs about $250, and with your help we can see them sprouting up like mushrooms all over the San Joaquin Valley. Adopt a newsstand today! To make a donation, send your check to Community Alliance Newspaper, P.O. Box 5077, Fresno, CA 93755.
§Other newsstands in downtown Fresno
by Mike Rhodes Friday Sep 6th, 2019 11:29 AM 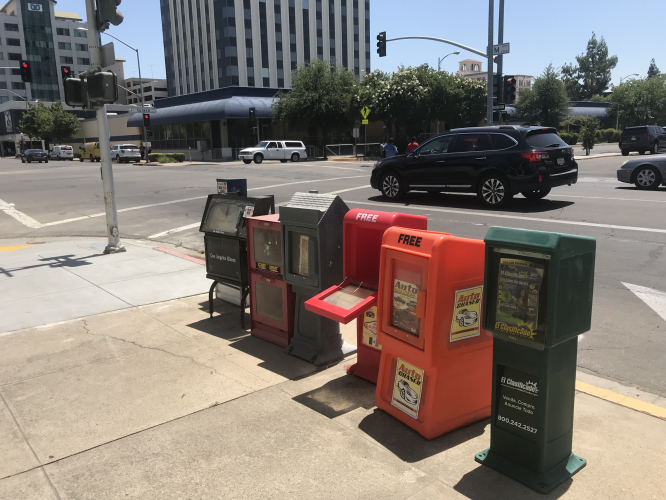 original image (4032x3024)
An example of other newsstands in downtown Fresno. Why was the City of Fresno targeting the Community Alliance in their attack on Free Speech?
Add Your Comments
Support Independent Media