Newswire
Calendar
Features
Home
Donate
From the Open-Publishing Calendar
From the Open-Publishing Newswire
Indybay Feature
Publish to Newswire
Add an Event
Related Categories: Santa Cruz Indymedia | Health, Housing & Public Services | Police State & Prisons
City of Santa Cruz to Consider Main Beach Curfew
by Santa Cruz News
Friday Sep 6th, 2019 11:22 AM
The agenda for Tuesday's Santa Cruz City Council meeting inculdes a proposal to implement a curfew on Main Beach in Santa Cruz, citing an increase in nuissance crimes committed by the homeless as the reason. City Manager Martin Bernal, Director of Parks and Recreation Tony Elliot, and Chief of Police Andrew Mills are recommending that the dry-sand portion of Main Beach be closed to the public from midnight to one hour before sunrise. For similar reasons in 2013, the Santa Cruz City Council voted to implement these same curfew hours on Cowell Beach, a curfew that is still in effect to this day. The City Council will hear this agenda item at 7:30 pm on Tuesday, September 10.

original image (1037x500)
The Main Beach curfew proposal comes after numerous recent reports in the media have focused on the visibility of homeless campers staying in tents on the beach. Photos of "homeless tents" on Main Beach, in front of the Santa Cruz Beach Boarwalk amusement park, have gone viral online.

City Staff provides the following context for the closure in the agenda report:

"In light of the Martin decision, and in recognition of evolving attitudes about effective ways of addressing nuisance conditions associated with homelessness, the City suspended enforcement of the Camping Ordinance’s prohibition of camping on public property. In addition, enforcement of Section 13.04.011 (prohibiting entering or remaining in a City park after hours) has focused upon homeless encampments that create nuisance conditions (such as accumulation of garbage, stolen property, drug paraphernalia or human waste) or present specific safety threats (such as fire risk). On April 9, 2019 the City council adopted Resolution No. NS29,506, establishing a Standard Operating Procedure for Removal of Homeless Encampments on City or Non-City Owned Public Property (the “SOP”). In early May, 2019, the City moved forward with the closure of the “Gateway Encampment,” a large unauthorized homeless encampment bounded by the “Gateway Plaza” shopping center, River Street, Highway 1 and the San Lorenzo River levee and occupied by 100-150 homeless individuals.

"Since the closure, the Police Department and Parks & Recreation Department have observed a growing homeless encampment on Main Beach adjacent to the San Lorenzo River Lagoon, with a corresponding increase in nuisance-related activity during nighttime hours (primarily alcohol abuse, illicit narcotics activity, litter and human waste) and the public safety and health hazards that necessarily ensue from that activity, including litter and discarded syringes, human feces, glass and other debris deposited on the beach by those engaging in the subject nuisance conduct. Additional information supporting the declaration of a nuisance will be presented at the hearing.

"Should the proposed beach curfew be implemented, presence upon the beach during curfew hours would in and of itself constitute an infraction thereby providing police officers with probable cause to contact and cite persons suspected of engaging in other nuisance-related criminal misconduct. In addition to the Police Department’s recommendation, the City Council itself and City staff have received numerous complaints from members of the public further evidencing the late night misconduct which takes place at Main Beach and the resulting public health and safety hazards. Finally the City Council, at the public testimony on this matter, is expected to receive oral testimony to this effect. City staff submits that all of this evidence amply demonstrates the need for the proposed curfew." 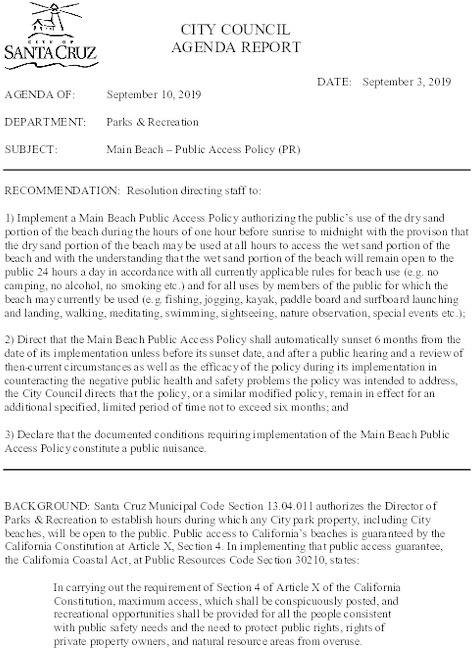