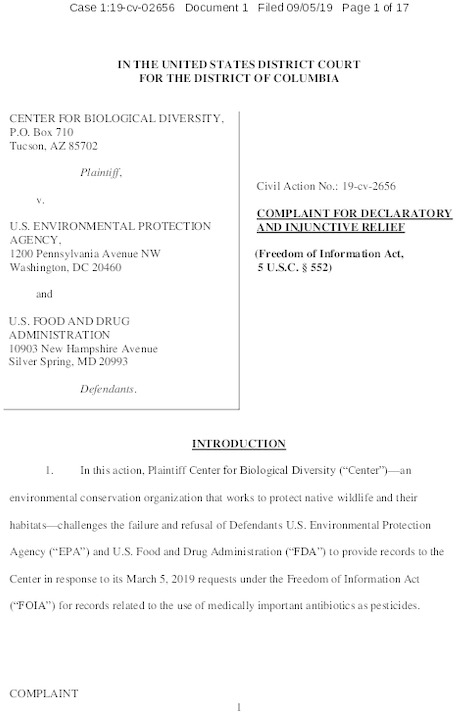 Download PDF (331.8KB)
WASHINGTON, September 5, 2019 — The Center for Biological Diversity sued the Trump administration today for refusing to release public documents related to its approval of expanded use of antibiotics as agricultural pesticides.

Overuse of antibiotics essential for treating human diseases poses a public health threat because it can lead to “superbugs” — bacteria that have developed antibiotic resistance.

Records obtained under the Freedom of Information Act reveal that the Centers for Disease Control and Prevention has raised serious concerns about expanding the use of antibiotics as pesticides. The records, though, are incomplete, and the Environmental Protection Agency and Federal Drug Administration have refused to release the rest.

“The Trump administration is recklessly endangering public health by allowing these human medicines to be sprayed on crops,” said Nathan Donley, a senior scientist at the Center for Biological Diversity. “The EPA is trying to conceal conversations revealing the risks these careless actions pose to public health and wildlife.”

The Environmental Protection Agency last year approved an estimated 388,000 pounds of oxytetracycline for use on citrus crops annually in California, Florida and other states. The agency has also proposed to allow an estimated 650,000 pounds of streptomycin to be used on the same crops each year.

These antibiotics are used in agriculture not as a cure but as a repeated treatment to combat outbreaks of citrus canker and citrus greening disease.

A CDC study found that the medically important antibiotics the EPA has approved for expanded pesticide use on crops can facilitate antibiotic resistance in bacteria that pose “urgent” and “serious” threats to human health. These harmful antibiotic-resistant bacteria include MRSA (Methicillin-resistant Staphylococcus aureus), nightmare bacteria (Carbapenem-resistant Enterobacteriaceae, or CRE) and VRE (Vancomycin-resistant Enterococcus).

These bacterial infections together account for more than 100,000 infections and 13,000 deaths per year in the United States.

Today’s lawsuit was filed against the EPA and the FDA in U.S. District Court in Washington, D.C., for failing to disclose correspondence with the CDC on the approval of medically important antibiotics as pesticides.

“Decisions about using these important antibiotics as pesticides should be guided exclusively by science, not profit motives,” said Donley. “Industry’s stranglehold on the Trump EPA’s pesticide-approval process is directly responsible for increasing the threat from deadly bacterial diseases.”

Last month U.S. Rep. Jackie Speier (D-Calif.) and congressional colleagues urged the EPA to reconsider the proposals to expand the use of antibiotic pesticides on crops across the country.