Add an Event
Newswire
Calendar
Features
Home
Donate
From the Open-Publishing Calendar
From the Open-Publishing Newswire
Indybay Feature
Publish to Newswire
Add an Event
Related Categories: San Francisco | Arts + Action
My Will and My Life, a play by Harry Cronin
by John Tranchitella (jtranchitella [at] gmail.com)
Monday Sep 2nd, 2019 8:48 PM
A chaplin for the New York City Fire Department, Father Mychal Judge is remembered by some as the Saint of 9/11. George is a NYC Fire fighter and 9/11 first responder. He tells a story of love, identity , redemption and grief. My Will and My Life will be performed at the SF Fringe Festival at the Exit Theater in SF 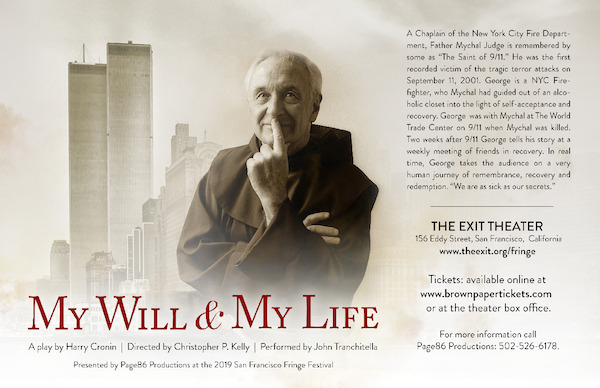 Download PDF (34.4MB)
Father Mychal Judge was a Chaplain for the NYC Fire Department. He was the first official victim of 9/11. I am performing a one man play about Father Mychal by award winning Berkeley Playwright Harry Cronin. Christopher P Kelly is the Director.

The play takes place a few weeks after 9/11.

Father Mychal Judge was the first official victim of 9/11. He died by being hit with debris when the South Tower of the World Trade Center collapsed.

It is a few weeks after 9/11 at a meeting of recovering alcoholics. My character George is speaking to this group about his relationship with Mychal and his grief, pain and fear about what happened on 9/11. Mychal had helped George get sober and had started to help him deal with being gay. This play is about a lot. I was attracted to playing George, because in a lot of ways, he is like me.

This is a beautiful poignant theater experience and everywhere I have performed it--people have been very positive.

I am thrilled to be performing at this year's Fringe Festival. Tickets online at : https://my-will.brownpapertickets.com/
http://www.theexit.org/fringe/
Add Your Comments
Support Independent Media
We are 100% volunteer and depend on your participation to sustain our efforts!