“We must produce more salmon, not less, for Southern Resident Killer Whales’ dietary needs. The Department of the Interior is content to put fewer fish in the ocean, starving orcas and fishermen alike, but we are not content with their plans. The state of California must take action to resist these environmental rollbacks and increase the salmon productivity of the Central Valley.” 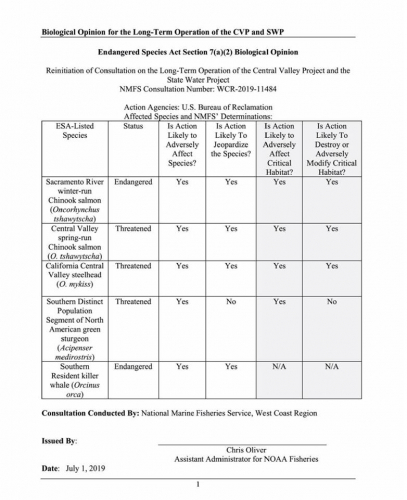 In the latest foray in the war on science, federal salmon biologists’ warnings about dangers to Chinook salmon and steelhead poised by planned increased water diversions by the Central Valley Water Project have been suppressed by the Trump administration.

The salmon warnings come as the federal government finalizes plans to export more northern California water to corporate agribusiness interests to irrigate the arid and drainage-impaired land on the west side of the San Joaquin Valley.

The Los Angeles Times reports the National Marine Fisheries Service (NMFS) staff in California finalized a biological opinion in early July that found the operation of the massive system of dams, canals, pumps and reservoirs jeopardizes protected winter and spring run salmon in the Central Valley, as well as southern resident killer whales.

“The July 1 assessment, obtained by The Times, outlines how proposed changes in government water operations would harm several species protected by the Endangered Species Act, including perilously low populations of winter-run salmon, as well as steelhead trout and killer whales, which feed on salmon,” reported Bettina Boxall.

“But the 1,123-page document was never released,” she wrote.

“Two days after federal scientists submitted their review, called a biological opinion, a regional fisheries official pulled the document and replaced the team that wrote it with a new group tasked with revising it, as The Times reported in July,” Boxall reported.

According to a statement from the Golden Gate Salmon Association (GGSA), “This jeopardy finding was rejected by the political appointees overseeing the process.  NMFS salmon biologists further recommended reasonable and prudent alternatives for operating the water project to minimize the damage to wildlife, including salmon runs. but these measures will now likely be ignored.”

The Department of Interior is currently run by former Westlands Water District and oil industry lobbyist David Bernhardt, whose former client would stand to profit greatly from the proposed reoperation of the project.

The draft biological opinion determined that the Trump Administration’s proposed operations of the CVP and SWP would result in declines to fall run Chinook salmon, which are not ESA listed and are the most important salmon species for commercial and recreational fishermen in California, according to the Pacific Coast Federation of Fishermen's Associations (PCFFA). However, the endangered southern resident killer whales’ diet is comprised solely of salmon, including fall run Chinook, that spend time in the Pacific Northwest as they grow and feed on the whales when they migrate south.

“While the National Marine Fisheries Service is currently evaluating whether to curtail salmon fisheries to provide additional salmon for whales, and the state of Washington has taken action to produce more salmon for whales, including a pledge of $1.1 billion as part of a blue ribbon orca task force, the Trump Administration appears poised to take actions that will result in even more death and hardship for the endangered orcas,” PCFFA said.

The Gavin Newsom administration and the California Legislature have not yet undertaken any parallel actions to produce additional salmon for Southern Resident Killer Whales to eat that would help save the species while creating a buffer that would allow commercial fishing and inland river guide jobs to survive, according to PCFFA.

PCFFA said the only bill in the state legislature that would accelerate additional salmon production, Senate Bill 69 (also known as the Ocean Resilience Act of 2019), authored by Senator Scott Wiener (D-San Francisco), is currently pending in Sacramento.

“California could also take defensive action to protect its rivers, species, and fisheries form the Trump Administration. Senate Bill 1, authored by Senate President Pro Tem Toni Atkins (D-San Diego), would create backstops against any Administration rollbacks of protections for ESA-listed fish in the Central Valley Project,” PCFFA noted. “This bill is the smart approach for the state to take in light of today’s revelations.”

Commercial salmon fishermen, represented by the Pacific Coast Federation of Fishermen’s Associations, were disappointed with the Trump Administration’s actions, saying the administration "is once again showing its true colors."

“The Department of the Interior is once again showing its true colors by subverting the scientific process to serve its clients in corporate agriculture, no matter which endangered fish or whales get in the way,” said Noah Oppenheim, executive director of PCFFA. “Will the state of California let the Trump Administration strike a brutal blow in the water wars, one that it can see coming, or will it take a defensive stand?”

The Golden Gate Salmon Association (GGSA) also reacted with dismay to the latest news of the Trump administration’s suppression of science to benefit corporate agribusiness.

“If the federal government gets away with this water grab, California’s salmon runs will be badly damaged, and likely forever,” said John McManus, president of the Golden Gate Salmon Association.  “All Californians should band together and reject this blatant and corrupt attempt to seize the state’s water by urging the governor to immediately pass and implement State Senate Bill 1, which will protect the state’s water and wildlife.”

McManus said Senate Bill 1 has passed the State Senate and is awaiting action in the Assembly.  Governor Gavin Newsom hasn’t indicated where he stands on the bill. The bill calls for state adoption of federal Obama era salmon and other wildlife protections until the state has time to review and potentially revise them.

“The bill is aimed at protecting state fish and wildlife from excessive water diversions the Trump administration, under Secretary David Bernhardt, is trying to force through,” said McManus.

“It’s clear that Interior Secretary David Bernhardt is politically interfering to direct more water to his former clients, the Westlands Water District, at the expense of salmon, killer whales and other species,” said McManus.  “Bernhardt seems determined to follow the footsteps of Ryan Zinke and Scott Pruitt to reward political cronies while thumbing his nose at the law.  This time he’s messing with salmon fishing families in California and we won’t be silenced.”

Reacting to the news that Southern Resident Killer Whales are included in the list of species that would be jeopardized by the Department of the Interior plan, Oppenheim concluded:

“We must produce more salmon, not less, for Southern Resident Killer Whales’ dietary needs. The Department of the Interior is content to put fewer fish in the ocean, starving orcas and fishermen alike, but we are not content with their plans. The state of California must take action to resist these environmental rollbacks and increase the salmon productivity of the Central Valley.”'

Regina Chichizola of Save California's Salmon, referring to the front page of the leaked Endangered Species Report for the Trump water plan, said, "There is no analysis of the impacts to the Trinity and Klamath fisheries beyond measures to make sure the diversion into Clear Creek and Whiskeytown get more water. Because fall chinook are not listed, they take the biggest hit (as do the Tribes and fishing industry). This is reflected in the orca impacts."

Today, August 26, is the last day to comment on the disastrous Trump Water Plan. Please sign this petition - Save California Salmon: Stop the Trump Water Plan: http://chng.it/77rqfkn9 via @Change

In addition to Trump administration attacks on California salmon and steelhead populations, the White House also recently overrode the EPA and ordered it to drop opposition to the Pebble Mine in Alaska, located on top of the richest spawning grounds in the world for sockeye salmon, added McManus.
Add Your Comments
Support Independent Media