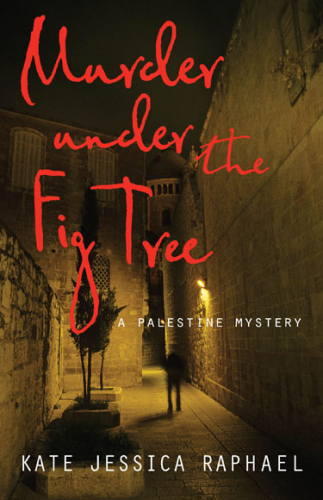 original image (375x580)
Kate Jessica Raphael is the author of Murder Under the Fig Tree and Murder Under the Bridge. Both novels are set in Palestine/Israel. Raphael reads 8/20, 6:30 at the Octopus Literary Lounge, 2101 Webster, Oakland California with Ben Shepard (NYC), Aya De Leon, and Liz Mariani.

RTJT: Raised in the South by a traditional Jewish family, you first went to Palestine as an international peace worker. Did you bring any pre-conceived notions with you and if so, which were the first to go?

KJT: I first went to Palestine as a tourist, more or less. A friend and I went for a month in 1994, just barely after the Oslo accords were signed. We spent most of our time meeting with Palestinian and Israeli activists, and went to some religious sites; my friend was then studying to be a rabbi. Even by then, I already had a pretty clear sense that everything I had been taught about Israel was wrong. But it was still a viscerally jarring experience to see close up the segregation, the constraints Palestinians lived with every day, and the lack of concern that even left-leaning Israelis had for what their government was doing. And I say that fully realizing that here in the U.S., we do the same. But it helped me to understand that the agreements were not the breakthrough that we in the States and elsewhere in the West believed they were.

At the same time, 1994 was a hopeful time. Israelis especially believed things were going to change. Left-wing Israelis were flocking to visit Ramallah and East Jerusalem. They were looking forward to normalization. Palestinians were much more guarded, but they could not help being hopeful, in part because they realized it was the uprising from 1987-1993, called the First Intifada, that forced Israel to enter into a process of compromise.
Unfortunately, no one knew then, I think, that Israel had no intention of allowing a truly independent and equal Palestinian state to exist, and that the government was already setting in motion processes that would hasten and cement the expropriation of most of what was supposed to be the future Palestinian land. And that is what I saw when I went back in 2002 that really shocked me – to see how much more closed off Palestine was, the network of bypass roads, what Palestinians know as settler highways, that Palestinians are forbidden to travel on. Places that I went in 1994 in fifteen minutes now took an hour and a half to get to, and you might suddenly be told the road was closed and you couldn’t go at all. Where there was hope in 1994, I saw the opposite in 2002 – hope being choked at every turn. It impacted me deeply.

RTJT: Did you have to think about the balance in presenting Rania and Chloe’s Points of View?

KJT: That was the hardest thing to get right. The first draft of Murder Under the Bridge was much too much in Chloe’s voice, because my experiences were being channeled through her. I had 1000 pages of journals to draw on. And of course, I imagined that everyone would be enthralled by her internal musings – which they were not! The irony is that Rania was then and has always remained much more alive in my mind. For as long as I’ve been writing fiction, the people least like me are the most fully imagined.
I have a lot of trouble figuring out what about me, or people like me, readers will and won’t relate to.

After the first draft, a New York agent was interested in the book, and I worked with her on two significant rewrites. The first stage was to bring out Rania’s voice more, and make her more integral to the plot’s resolution. That was not that difficult. The next challenge was to make Chloe more real, and I think that’s been less successful, but I continue working on it.

The second book was more organic in a lot of ways. I knew I was going to alternate points of view, mostly but not exclusively chapter by chapter. It was a challenge at the beginning because Rania’s in jail, so she can’t do much, and Chloe’s running around, but Rania’s experiences are much more intense, so even if Chloe was getting more page time, Rania was making a strong impression.

RTJT: How closely do your own experiences in Palestine mirror events in the two books? Was there really a Rania?

Many incidents and conversations in both books are taken from my experience there, and more are borrowed from Palestinian friends. I was pretty fast and loose with people’s lives, but I felt justified because Palestinians are always telling foreigners, “Go back and tell people our stories.” So I took them literally.

Rania is not based on any one person, she is an amalgam of a number of women I know or have read about or seen on film. She probably has the most in common with my friend Fatima Khaldi, who died last year. Fatima was not a policewoman, she was an organizer, but her bio was similar to Rania’s – she was a refugee, Jerusalem educated, iconoclastic yet traditional, equally devoted to her kids and her job. She would do things people in her village found scandalous, and was often tactless, but she commanded a lot of respect because she got things done. But there are some significant differences between her and Rania, and one is that Fatima was divorced and Rania has a very loving, if sometimes difficult, marriage. Parts of the relationship between her and her husband’s family are based on some other friends from my village, while the way in which Rania sometimes ignores Bassam until she needs him to drive her somewhere is drawn from some friends I had in the city of Tulkarem.

The section of Murder Under the Bridge set in the immigration prison is very much drawn from the time I spent in jail, when most of my fellow inmates were domestic workers like Nadya, the murder victim. But some of the specifics are taken from things I read or heard when I got back.

RTJT: Have you suffered any blowback from parts of the larger literary community as a result of your pro-Palestinian perspectives?

KJT: I’m not well known enough in the literary community to get blowback. I definitely don’t get some invitations that other authors in my circles do, and I’m sure some of that is because of the subject matter. Not just that it’s about Palestine, but also that it’s so political and that I am so countercultural. I think a lot of people don’t know what to make of me – an anarchist lesbian who writes mysteries about Palestine. And then there’s the fact that the literary community can be very obnoxious about genre writing. When I don’t win an award, I tell myself it’s a Zionist plot. That feels better than admitting the possibility that my writing just isn’t that good.

RTJT: What's next for you? What are you writing about now?

KJR: Right now I am working on a suspense novel about a retired nurse midwife from the Bay Area who goes South to help start an underground abortion network. I first worked on it in 2013, and it was set in 2021. Now I’m afraid that the situation it presupposes, where abortion is illegal across the South and much of the rest of the country, is going to be reality before 2021. So I’m rushing to get it out before it is historical instead of speculative fiction.

I do have a third Palestine mystery in the works as well, which is about the early days of the BDS (Boycott, Divestment & Sanctions) movement, and of course that is very timely now too, so I’d love to get back to that one soon. I just have to find a rich girlfriend so I can quit my day job.