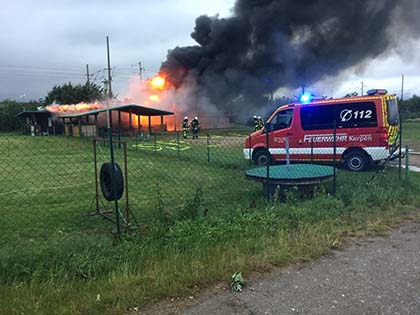 On June 5th, as members of the Animal Liberation Front, we set fire to a training school for police dogs.

We see the legitimacy of this action in the fact that the police, a classist, sexist and racist institution, has no right to use any animals as weapons of oppression.

Let us remind you that the police serves capitalism and is, therefore, an enemy in the struggle for the liberation of humans and animals.

With this action we want to make it clear that we are growing and spreading; not only in numbers but in strategy; that we are attacking the root problems instead of focusing on symptoms; and that we do not accept the complicity of the police and the animal exploitation industry.

Every time the police arrests one of us (be it for smashing windows or for disrupting a McDonald’s), they collaborate with the animal exploitation industry and attack us all. It’s time for this to stop.

We want to frame this action as a ‘rage celebration’ for June 11th, ‘International day of solidarity with long term anarchist prisoners’, and send greetings especially to Matthias, who has been imprisoned in Switzerland for more than 6 months still awaiting trial accused of smashing butcher shop windows.

For a world without oppression, without capitalism, and without police – ignite a revolution!

Let’s not forget to mention our McDonald’s-smashing friends, may the broken glass bring us freedom!