Newswire
Calendar
Features
Home
Donate
From the Open-Publishing Calendar
From the Open-Publishing Newswire
Indybay Feature
Publish to Newswire
Add an Event
Related Categories: U.S. | Animal Liberation
600 Mink Liberated from Jerry Marr Mink Farm in Washington (Delayed Report)
by Animal Liberation Press Office
Thursday Aug 15th, 2019 6:43 PM
Washington State: In early November last year, animal liberation activists crossed a waist high stream to reach the woods surrounding Jerry Marr mink farm in northern Washington. While waiting to ensure the farm was free from security patrols, the activists were met with the scattered cries and constant scratching of imprisoned minks. Within fifteen minutes six hundred cages were opened. Fencing was damaged allowing escapees easier access to the nearby creek. These solitary predators can travel ten miles in a day and will quickly disperse over a large area once released. Hopefully a handful of animals found the Nooksack River, and made their way to the expansive Mt Baker Snoqualmie National Forest which holds a infinite amount of streams and rivers for these semi aquatic animals. This action took place just before the winter pelting season, to ensure the minks were full grown, while inflicting maximum economic damage. 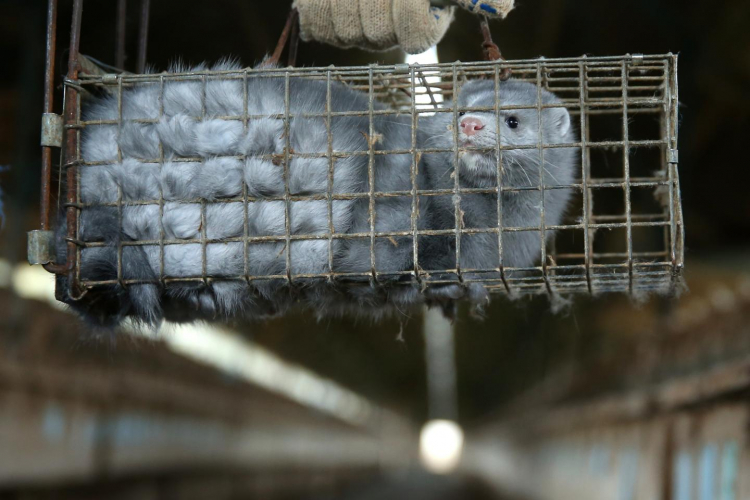 original image (1440x960)
Now the nightmarish cycle continues as the remaining 200 something fur farms in the US prepare to grow their herd. Mink kits are born in late spring early summer and once they are able to consume solid food, they are taken from their mother and siblings where they live their 7 month life until they are killed by snapped necks, gas, or electrocution. Each individual sentient being exists in one of many cages on one of many rows in one of several barns until they are killed, pelted, and turned into high fashion garments. Unless someone like you becomes the animal liberationist, giving American wildlife salvation while dealing blows to the dying industry.These are native predators, and these farms usually sit atop their historic habitat.

Something for potential activists to consider is these animals are full grown by late August or September and are killed for their fur in late November or December. Whenever their fur is developed enough to bring the most profit to farmers. Animals released once they are maturing are probably unable to survive on their own. Potential activists should consider the months of September through November for action.

These actions are very simple and often all thats needed is the will to act on behalf of innocent animals, problem solving, and imagination which is usually stolen when we turn our fight over to compromising organizations.

The Animal Liberation Front and other anonymous activists utilize economic sabotage in addition to the direct liberation of animals from conditions of abuse and imprisonment to halt needless animal suffering. By making it more expensive to trade in the lives of innocent, sentient beings, they maintain the atrocities against our brothers and sisters are likely to occur in smaller numbers; their goal is to abolish the exploitation, imprisonment, torture and killing of innocent, non-human animals. A copy of the Final Nail, a listing of known fur farms in North America, is available from the Press Office website at http://www.animalliberationpressoffice.org