Add an Event
Newswire
Calendar
Features
Home
Donate
From the Open-Publishing Calendar
From the Open-Publishing Newswire
Indybay Feature
Publish to Newswire
Add an Event
Related Categories: California | Central Valley | LGBTI / Queer | Racial Justice
All Out to #DefendModesto From White Nationalist "Straight Pride" Event
by #Defend209
Thursday Aug 15th, 2019 11:44 AM
All out to #DefendModesto from the white nationalist "Straight Pride" rally being organized on August 24th in Modesto, California. While the City has denied a permit due to lack of insurance, bigots are still planning to mobilize! 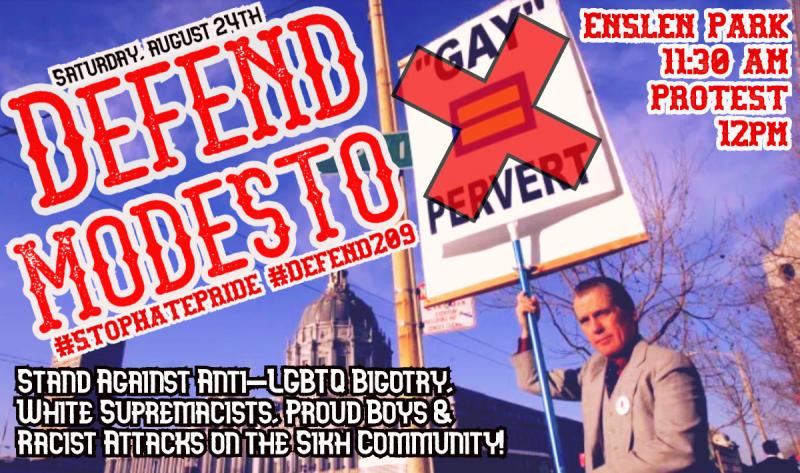 original image (1200x710)
On Saturday, August 24th, a group of white nationalist anti-LGBTQ activists along with supporters from the far-Right will hold a rally in support of the "inherent superiority" of "whiteness," the "Caucasian" race, and "Western Civilization" under the guise of a "Straight Pride" demonstration that will also champion an all out assault on queer and trans people. While the City of Modesto has denied a permit to the organizers due to lack of insurance, they claim that they will still hold a demonstration somewhere in Modesto.

The rally is the brain child of white nationalist, anti-Semite, and anti-LGBTQ bigot Don Grundmann, who for years has harassed Pride events in Modesto and beyond. But this event is also not just being organized by a small group of fringe wingnuts, but none other than Mylinda Mason, a failed School Board candidate and a long time Republican Party organizer and fundraiser who is also the head of the California Republican Assembly, which has long held events and campaigned for a wide variety of GOP candidates across Northern California. Up until recently, the event was also supported by Ryan Schambers, a former member of the Central Committee of the Stanislaus County Republican Party. Mylinda also plans to bring Grundmann back to speak in Modesto for a Republican event on October 3rd. They view the Straight Pride rally as the first step in integrating even more hardcore white nationalist and anti-LGBTQ politics into the GOP which Trump has kicked the door open to.

In the face of this, people from across Modesto and the greater Central Valley and Northern California have begun to come together to mobilize against this hatred towards the LGBTQ community and communities of color. This event and the group of people organizing it represent a threat to the greater Modesto community. Only a week after this event was announced, there was a violent attack against the local Sikh Temple located right outside of Modesto. The assailant broke windows and assaulted the priest who lived on the property, echoing Trump and telling him to, "Go back to his country." These are the type of people that the "Straight Pride" parade hopes to rally and the organizers have spent weeks encouraging members of far-Right and Alt-Right groups to attend. One of these groups is the Proud Boys, who across the country have savagely attacked and beaten anti-racist demonstrators and members of the public. The Proud Boys also played a key role in organizing and attending the Unite the Right demonstration in Charlottesville, which ended in the death of antifascist protester, Heather Heyer, and a member of the Proud Boys going to prison for the savage beating of a local African-American youth. On the "California Straight Pride Coalition" Facebook page, other white nationalists and members of far-Right groups have also signed up to help organize and attend the event.

Trump isn't just dog-whistling to white nationalists and violent far-Right groups: he's blowing a bull horn. With thousands being rounded up into camps, children being ripped from their families, non-stop attacks on workers, unions, the poor, and the environment, and those on the Right and the Center calling for social movements to be labeled as "domestic terrorists" while white nationalists gun down entire families, it is important that now, more than ever, we take a stand against those that seek to divide our communities and pit us against each other for their own gain.

We call on people, community groups, labor unions, and political organizations across the Central Valley to converge in Modesto on August 24th to send a clear message that they will not gain a foothold in our communities and on our streets. We will rally at Enslen Park* at 11:30 AM and then protest at 12 NOON against the white nationalist, "Straight Pride" rally, where ever it may end up being held.

We seek to center the voices of the local LGBTQ community and those of color while also creating a space that is welcoming and inclusive to all. We understand that many people are afraid of far-Right and Alt-Right groups possibly attending and we are determined to express ourselves while also keeping each other safe. To do this, we are asking for groups throughout the region to step up and stand with us. Bring signs, banners, and things to make noise!

AGAINST RACIST ATTACKS ON THE SIKH COMMUNITY!

AGAINST WHITE SUPREMACY, HOMOPHOBIA, AND TRANSPHOBIA!

IN THE SPIRIT OF PRIDE!

*Enslen Park is located in the Downtown of Modesto, directly behind Graceada Park. People will gather at Stoddard and Park Ave.
Add Your Comments
Support Independent Media
We are 100% volunteer and depend on your participation to sustain our efforts!