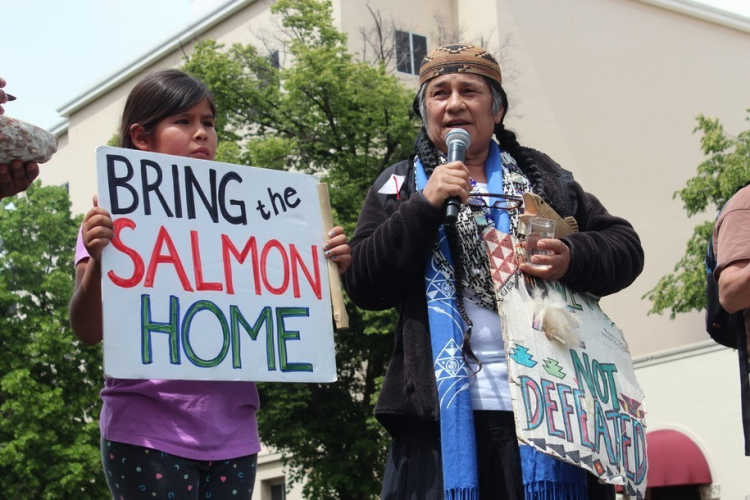 original image (915x610)
The Trump administration announced Monday that it finalizing new rules to slash protections for endangered species under the Endangered Species Act, one of the nation’s landmark environmental laws, signed by President Richard Nixon in 1973.

These rules are the result of intense lobbying by agribusiness, the oil and gas industries, mining companies, developers and other corporate interests to remove protections for endangered species — and part of a larger push by the Trump administration and its allies to eliminate any regulatory constraints to corporations plundering the environment in search of higher and higher profits, according to environmental advocates.

“Overall, the new rules would very likely clear the way for new mining, oil and gas drilling, and development in areas where protected species live,” the New York Times reported.

U.S. Secretary of the Interior David Bernhardt claimed that the new rules are “improvements” to the implementation of ESA regulations designed “to increase transparency and effectiveness and bring the administration of the Act into the 21st century.”

“The best way to uphold the Endangered Species Act is to do everything we can to ensure it remains effective in achieving its ultimate goal—recovery of our rarest species. The Act’s effectiveness rests on clear, consistent and efficient implementation,” said Secretary Bernhardt, who was appointed by Trump to his post after many years serving as a lobbyist for the Westlands Water District, the largest agricultural water district in the country, and the oil industry. “An effectively administered Act ensures more resources can go where they will do the most good: on-the-ground conservation.”

The changes finalized by Interior’s U.S. Fish and Wildlife Service and the Department of Commerce’s National Marine Fisheries Service apply to ESA sections 4 and 7. Section 4, among other things, deals with adding species to or removing species from the Act’s protections and designating critical habitat, while section 7 covers consultations with other federal agencies, according to Interior.

Environmental advocates disagree strongly with Interior’s contention that the regulations are designed to “increase transparency and effectiveness,” countering that regulation changes would instead greatly weaken federal efforts to protect and restore fish, animals and plants threatened with extinction.

”These changes, which seek to eviscerate the ESA, go against Congress’ explicit mandate that management rely on the best available science and actively protect and restore plants and animals deeply vulnerable to extinction,” according to a statement from the Western Environmental Law Center. “With this action, the administration will allow politics and money to influence do-or-die decisionmaking on issues of endangered species recovery or decline on a scale never before seen in the history of this fundamental and necessary law.”

In addition, the changes will allow the federal government to ignore extinction threats from climate change “at the precise moment we’re witnessing the most dire ecosystem-wide shifts and extinction events in world history,” the Center said.

This move would have a huge impact on winter Chinook salmon, Delta smelt, longfin smelt, green sturgeon and other California fish species that have declined dramatically in recent years, due to massive exports of Northern California water to corporate agribusiness interests on the west side of the San Joaquin Valley and Southern California water agencies. The Trump administration will make a bad situation even worse than it is now, according to fishing groups and environmental organizations.

"Here in California we're likely to see salmon, sturgeon, steelhead trout, wolves, wolverines, kit fox and many others all slide towards extinction as a result of today's action by the Trump White House,” said John McManus, President of the Golden Gate Salmon Association. “It's clear that the Trump administration actions are aimed at helping developers, large agribusinesses, multi-national mining companies and others profit at the expense of our natural areas and wildlife. This will hurt the people of California who rely on healthy natural resources to make a living, including salmon fishermen and women."

“There is an effort underway to reduce lands we Americans hold in common, like the SF Bay-Delta, to resource extraction sites,” said Barbara Barrigan-Parrilla, Executive Director of Restore the Delta. ‘We need assurances from the Newsom Administration that protecting Delta fisheries & 700 native species will be a bigger priority for California Water policy than ever. The people of the Delta look to the leaders of California to do the right thing.”

California Attorney General Xavier Becerra and Massachusetts Attorney General Maura Healey also responded to the announcement by the Trump Administration of its final rule rolling back key provisions of the Endangered Species Act, vowing to take legal action against the rule.

“As we face the unprecedented threat of a climate emergency, now is the time to strengthen our planet’s biodiversity, not to destroy it,” said Attorney General Becerra. “Our precious wildlife and ecosystems are in critical danger. By rolling back the Endangered Species Act the Trump Administration would be putting a nail in our coffin – all for the sake of boosting the profits of those putting these species at risk in the first place. We’re ready to fight to preserve this important law – the species with whom we share this planet, and depend on, deserve no less.”

“By gutting key components of the Endangered Species Act, one of our country’s most successful environmental laws, the Trump Administration is putting our most imperiled species and our vibrant local tourism and recreation industries at risk,” said Attorney General Healey. “We will be taking the Administration to court to defend federal law and protect our rare animals, plants, and the environment

The new rules come as a number of California fish species are moving closer and closer to extinction. The fall of 2018 saw a new record low number of Delta smelt — zero — in the California Department of Fish and Wildlife (CDFW) midwater trawl survey. This trend has continued in the spring Delta smelt 20-mm surveys conducted this year and last year, with a record low number of the smelt collected by Department scientists. (http://www.wildlife.ca.gov/…)

The attack on the Endangered Species Act by the Trump administration also comes as the Newsom administration continues to move forward with planning for the controversial Delta Tunnel. Despite the fact that the new Delta Tunnel project supported by Governor Gavin Newsom has not been approved, the Department of Water Resources is proceeding forward with negotiations with its water contractors over the State Water Contract Amendment for the Delta Conveyance.

After the public comment period at the first negotiating meeting on the Delta Tunnel between DWR and the state water contractors in Sacramento on July 4, Caleeen Sisk, Chief of the Winnemem Wintu Tribe, told me about the Tribe’s continued opposition to the Delta Tunnels.

“Our belief is that Mother Earth made the Delta the way it is because it is a fully functional and perfect system. By digging the Delta up, we don’t know how it will end up. You don’t want to ruin a perfect system for an imperfect project. You can’t negotiate a perfect system. Once we dig up the Delta, you can’t return it to its natural state,” stated Chief Sisk.

Photo: Caleen Sisk, Chief of the Winnemem Wintu Tribe, speaks at a March for Science rally in Sacramento in April 2017. Photo by Dan Bacher.
Add Your Comments
LATEST COMMENTS ABOUT THIS ARTICLE
Listed below are the latest comments about this post.
These comments are submitted anonymously by website visitors.