“The days when I could read and speak and organize to defend myself, my ideals, and my people are over until I am free! Everyone else must take my place.” — Julian Assange, from Belmarsh Prison 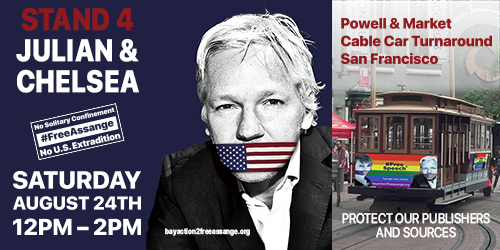 Julian Assange- a Nobel-nominated journalist who has won numerous journalism awards & is a founder of Wikileaks- notorious for publishing 100% truth with never one retraction- is detained in Belmarsh Prison, the Gitmo prison of the UK. This, after being literally dragged out of the Ecuadorian Embassy in London, where he had spent the 7+ years prior in forced asylum. All for publishing truths about U.S. war crimes. Yet the war criminals walk free and persecute Assange as an example, and mainstream media blacks out the story and regurgitates only the acceptable narrative, spreading character assassination smears and lies about Assange.
“Visiting Julian #Assange in prison I glimpsed his barbaric treatment. Isolated, denied proper exercise, access to the library, a laptop, he cannot prepare his defense. He is even denied calls to his US lawyers. His UK lawyer wrote to the governor on 4 June. Silence. How lawless.” ~John Pilger 8/11/19
For a factual timeline: https://defend.wikileaks.org/2018/07/23/liveblog-julian-assange-in-jeopardy/

Chelsea Manning is jailed for refusing to testify in front of an unconstitutional and secret WikiLeaks Grand Jury in Virginia. Chelsea has spent over 135+ days in jail (this time) and has accumulated $16,000 in compounding fines as of July, 2019, which continue to increase daily.
On March 8, 2019, Chelsea was taken into custody AGAIN for resisting the grand jury in the Eastern District of Virginia, stating:
“I will not comply with this, or any other grand jury. Imprisoning me for my refusal to answer questions only subjects me to additional punishment for my repeatedly-stated ethical objections to the grand jury system.
The grand jury’s questions pertained to disclosures from nine years ago, and took place six years after an in-depth computer forensics case, in which I testified for almost a full day about these events. I stand by my previous
public testimony.
I will not participate in a secret process that I morally object to, particularly one that has been historically used to entrap and persecute activists for protected political speech.”
Factual Timeline: https://www.aaronswartzday.org/chelsea-latest/#address

Thank you for reading.
http://BayAction2FreeAssange.org
Add Your Comments
Support Independent Media
We are 100% volunteer and depend on your participation to sustain our efforts!