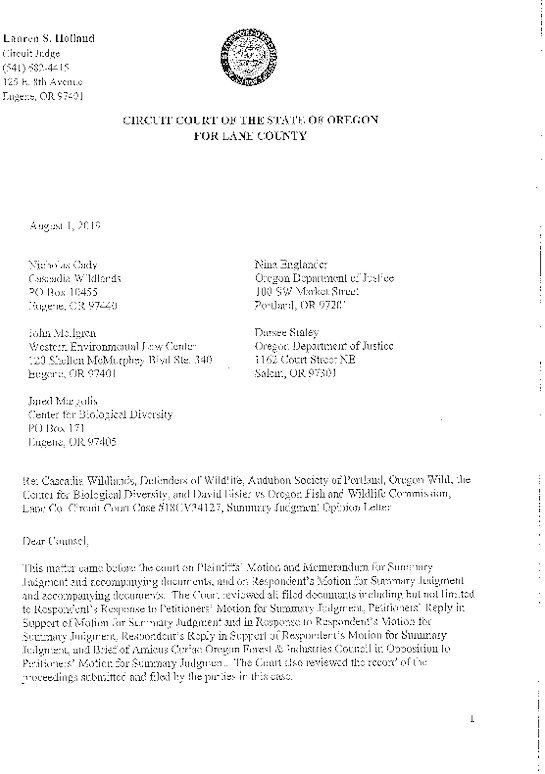 But, after a change in its membership, the commission reversed itself without explanation, and voted 4-2 in June to deny the petition it had accepted just four months earlier.

“Oregon’s desperate struggle to avoid protections for the marbled murrelet ignored science, the law and ODFW’s mission to protect Oregon’s imperiled wildlife,” said Nick Cady, legal director at Cascadia Wildlands. “Our governor needs to step up and meaningfully address her agencies’ cowering demeanors when it comes to regulating private industries in Oregon. This active neglect of its duties towards imperiled species left the marbled murrelet on a path toward extinction in Oregon. It is a shame that we even need the court to address these issues.”

The marbled murrelet is a small seabird that nests in old-growth and mature forests and forages at sea. Its population has declined dramatically in recent decades due to extensive logging in Oregon’s coast range.

The bird was listed as threatened under the Oregon Endangered Species Act in 1995. However, Oregon has allowed intensive clearcut logging to continue in marbled murrelet habitat on lands owned and regulated by the state. Uplisting to endangered status would require the state to develop a management plan and survival guidelines, providing much-needed protections for the species.

“There can be no question the marbled murrelet is endangered in Oregon,” said Noah Greenwald, endangered species director at the Center for Biological Diversity. “Logging, warming seas and a host of other factors are all taking a toll on this far-flying seabird. We’re so glad the court rejected the Oregon Fish and Wildlife Commission’s wrongheaded reversal of its decision to uplist the murrelet to endangered.”

In 2017, responding to the petition from conservation organizations, ODFW conducted a status review to assess the murrelet’s condition. The review demonstrated that murrelets need increased protection under the Oregon Endangered Species Act, due largely to loss of nesting habitat from ongoing clearcut logging on lands managed by the state of Oregon.

“This decision is a win for marbled murrelets and for Oregonians who care about protecting biodiversity in the Pacific Northwest,” said Quinn Read, director of the Northwest program at Defenders of Wildlife. “The commission’s attempt to deny protections for this imperiled species undermined fair and transparent public process and disregarded overwhelming science. The court is now holding the commission accountable to science and the urgent need to protect our native wildlife.”

The status review provided copious evidence from multiple peer-reviewed studies that murrelets are at serious risk in Oregon. The best available science predicts the extinction probability at 80 percent by 2060 along Oregon’s central and north coasts and 80 percent by 2100 along Oregon’s south coast. California and Washington have already classified murrelets as endangered.

“The ODFW Commission’s reversal of its decision to uplist the murrelet to endangered was outrageous and had no basis in either science or law,” said Bob Sallinger, conservation director for Portland Audubon. “It is time now for ODFW to do what they should have done more than a year ago and uplist the murrelet to endangered and put in place measures to reverse its decline toward extinction.”

“We are in the midst of a global extinction crisis. Oregon will not be able to confront that crisis and protect our native wildlife if our leaders are willing to ignore science, the public and even their own rules to appease the timber industry,” said Danielle Moser, wildlife program coordinator for Oregon Wild.

“The best available science tells us that murrelets in Oregon will go extinct in the near future unless we take immediate action to rectify the biggest threats to the murrelet’s survival. The uplisting petition was aimed at doing that,” said John Mellgren, wildlife director for the Western Environmental Law Center.

The conservation groups in this case are represented by attorneys from Western Environmental Law Center, Cascadia Wildlands and the Center for Biological Diversity.