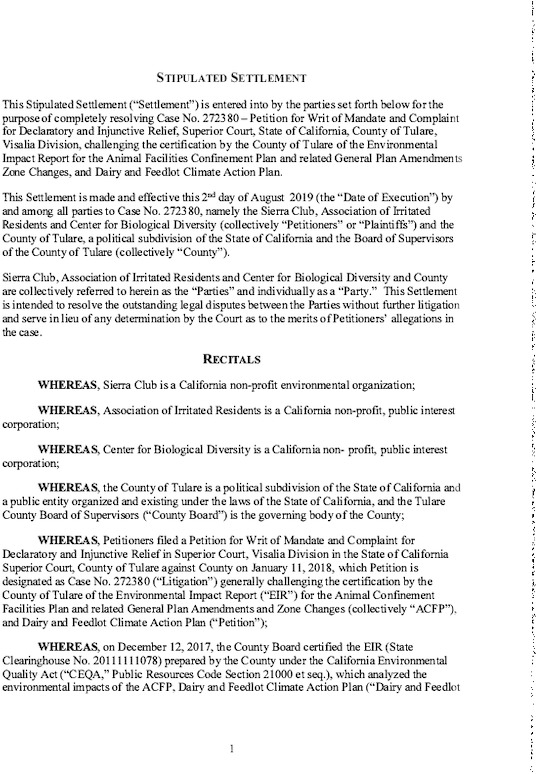 The agreement prioritizes a range of methods to cut methane emissions, including onsite renewable-energy generation and improved manure treatment that avoids use of open manure lagoons.

“Air pollution from industrial dairies leads to health problems like headaches in my own family and climate change for the global community,” said Tom Frantz, executive director of Association of Irritated Residents and an almond farmer in the San Joaquin Valley. “This agreement finds common-sense ways to reduce the air pollution from dairies and increases public accountability for dairy and livestock pollution.”

Tulare County is home to more than 1 million cattle — more than double the human population — and produces more milk than any other U.S. county.

“Cutting methane pollution from cows in America’s biggest dairy-producing county is crucial to fighting the climate crisis,” said Jonathan Evans, environmental health legal director at the Center for Biological Diversity. “We need a range of tools, beyond manure digesters, to speed greenhouse gas reductions and protect public health. As California gets hit hard by global warming, we’ve got to curb methane emissions.”

Beyond harms to human health resulting from methane's role in intensifying climate change, the pollutant also triggers increased levels of ozone, which can lead to asthma attacks, hospitalizations and even premature death. Ozone also impairs the ability of plants to absorb carbon dioxide, suppressing crop yields and harming ecosystems.

Today’s agreement calls for increased oversight of emissions from dairy and livestock operations to improve compliance with air and water quality standards. That includes improved tracking and public reporting of greenhouse gas emissions, such as methane, and greater transparency about how those issues impact the siting and expansion of dairies.

“The dairy and feedlot industry must do more to eliminate potent greenhouse gas emissions that are driving the climate crisis,” said Gordon Nipp of the Sierra Club. “This settlement seeks to hold this industry accountable by ensuring that common-sense measures are put in place to meaningfully acknowledge, address and limit the greenhouse gas emissions from this sector.”

S.B. 1383 requires reducing climate pollutants, including methane, from the dairy and livestock sector, by as much as 40 percent by 2030.

The agreement settles a 2018 lawsuit filed in Tulare County Superior Court by the Center for Biological Diversity, Association of Irritated Residents and Sierra Club.

The conservation groups are represented by the Law Offices of Babak Naficy and attorneys from the Center for Biological Diversity.