Add an Event
Newswire
Calendar
Features
Home
Donate
From the Open-Publishing Calendar
From the Open-Publishing Newswire
Indybay Feature
Publish to Newswire
Add an Event
Related Categories: San Francisco | U.S. | Government & Elections | Immigrant Rights | LGBTI / Queer
LGBT Activists Launch #BoycottSoulCycle at San Francisco Franchise
by Stop Trump Now
Thursday Aug 8th, 2019 7:50 AM
In response to reports that the CEO of parent company to SoulCycle Stephen Ross will be holding a fundraiser for the Donald Trump reelection campaign, members of the LGBT community launched a boycott in front of Soul Cycle's Harvey Milk Plaza location on August 7th in San Francisco. Demonstrators said they are angry that the owner of the fitness center chain, who also owns the Miami Dolphins, is supporting a racist, homophobic, and sexist president. 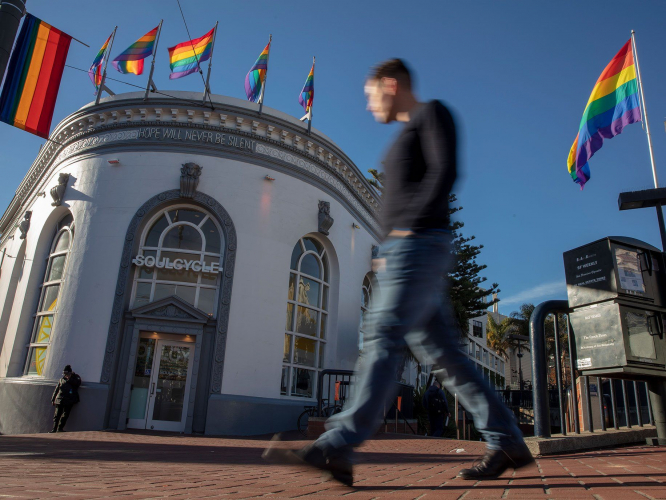 original image (1832x1374)
LGBT activists in San Francisco have joined a nationwide call for a boycott of the fitness chains SoulCycle and Equinox after discovering that the billionaire owner of their parent company is a supporter of President Donald Trump. They are calling on current members to cancel their memberships and decline to renew them.

On August 7, a group of demonstrators stood for an hour in front of the SoulCycle franchise at Castro and Market Streets in Harvey Milk Plaza holding #BoycottSoulCycle signs. They hoisted an "Impeach Trump" pinata prop to convey their demand that the House of Representatives begin impeachment hearings.

Stephen Ross is the majority owner of the parent company of SoulCycle and Equinox gyms who has given heavily to Republican candidates and committees. Nationally, activists responded quickly when they heard that Ross would be holding a large Trump fundraiser in the Hamptons on August 9th. In San Francisco, demonstrators took the opportunity to remind Soul Cycle members entering the rainbow flag decorated building to know where their money is going and refuse to buy products and services that will benefit investors who support anti-gay rights causes and other forms of discrimination. Demonstrators in Harvey Milk Plaza held signs calling out Trump for his policies against immigrants.
Add Your Comments
Support Independent Media
We are 100% volunteer and depend on your participation to sustain our efforts!