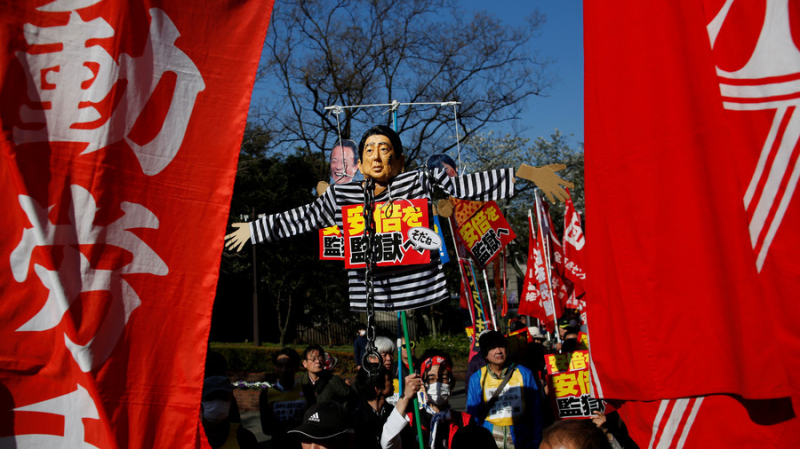 original image (900x506)
Statement of International Labor Solidarity Committee of Japan Railway Workers Union Doro-Chiba On Growing Threat Of Dictatorship, Xenophobia & War
"Korean working class people are not our enemy”
Down with the Abe administration rushing to constitutional revision and war!
We demand immediate withdrawal of the export restriction against South Korea!

The Abe administration is now fiercely imposing retaliatory export restrictions against South Korea and provoking nationalism and chauvinism to stir up hostility against Korean people. It is an apparently unreasonable and shameless response to the recent ruling of South Korea’s Supreme Court that ordered a Japanese company to compensate “conscripted Korean workers” (forced labor in Japanese factories in wartime). We shall never allow such an unjust behavior of Japanese ruling class against Korean people.

For 74 years after the end of World War II and the end of Japanese 36 years’ colonial rule over Korea, the Japanese government has consistently refused to take grave historic responsibility for the aggressive war and tried to even justify Japanese suppression of Asian people. It is, therefore, inevitable that Korean people has been raising their angry voices to denounce Japanese imperialism and seek responsibility. We, Japanese people, must seriously and honestly stand face to face in front of the accusation of the Korean people. The Abe administration together with reactionary forces, however, violently abuse, slander and attack the very just claim of Korean people. It is absolutely inadmissible.

In the background of this move, a historic reactionary onslaught is being mounted to revise the constitution (abolition of the non-war clause through legalization of the Self-Defense Forces, etc.) and to carry out a large-scale militarization with an aim of making Japan again “a country capable of waging war”.
On August 2nd, the Abe administration dared to take a cabinet decision to remove South Korea from a “white list” of trusted export destination, and 1,000 items will be subject to export restriction added to three chemical products at the end of August under the pretext of “export control for the reason of national security”. Such an outrageous action is almost an act of war.

Japan-Korea Annexation Treaty of 1910 was a decisive starting point of systematic invasion of Japanese imperialism into Korea, China and the rest of the Asian countries. The issues of “conscripted Korean workers” and “comfort women” were the atrocious acts of war crime committed by Japanese imperialism under the cruel system of oppression and elimination over whole nation which dared to even deprive Korean people of their language.

The aim of concluding Treaty on Basic Relations between Japan and the Republic of Korea in 1965 was to bury the guilty past through making a pact with the military dictatorship of Park Chung-hee regime.
Hundreds of thousands of Korean people furiously rose up against this deceitful treaty breaking through brutal state power repression by the army mobilization. In response to this courageous struggle of Korean colleagues, Japanese workers fought against the conclusion of this treaty with a mass participation of young workers including the youth section of Doro-Chiba.

All through the process of preparing and concluding the 1965 Treaty, however, the Japanese government showed no attitude of apology for the past colonial rule. On the contrary, it shamelessly claimed that the Japan-Korea Annexation Treaty of 1910 was “legal” and refused to refer to the term of “compensation“. Instead it was decided to deliver a certain sum of fund (under the name of grant for economic co-operation [instead of compensation]) to the military dictatorship to motivate fresh investment of Japanese capitals to the South Korean economy.
This historical fact evidently reveals the demagogic essence of Abe’s repeated statement that the “Agreement Concerning the Settlement” (note) has brought about the complete and final solution of all issues concerning the passed era.
Note: Agreement Between Japan and the Republic of Korea Concerning the Settlement of Problems in Regard to Property and Claims and Economic Cooperation

Now the Abe administration has stepped into a new phase of destruction of national railway labor movement hand in hand with Japan Railway Company through outsourcing and casualizing even drivers and conductors on the pretext of introducing “automatic operation” system.
Kan-Nama (Solidarity Union of Japan Construction and Transport Workers Kansai Area Branch) has been under a large-scale and extraordinary brutal repression: more than 80 union members have been arrested and detained with over 50 out of them being indicted since July last year. They are accused for conducting normal union activities such as distributing fliers in the workplaces and/or doing compliance checking. Many of the arrested unionists were on the charge of “attempt of extortion” or “forcible obstruction of business”.

Union-bashing or annihilation of labor union itself by the state power is on the way in line with instigation of nationalism and chauvinism. At the point of production or in workplaces, however, class struggle labor movement has been steadily expanding its influence together with developing international solidarity with Korean workers as its axis.

Arm in arm with the workers of the world with Korean workers on the front line, in facing the present situation and for the future of the working class, we do not allow the retaliatory export restriction of government and are firmly determined to overthrow the Abe administration in pursuit of constitutional revision and war!
Let’s fight together!