Add an Event
Newswire
Calendar
Features
Home
Donate
From the Open-Publishing Calendar
From the Open-Publishing Newswire
Indybay Feature
Publish to Newswire
Add an Event
Related Categories: San Francisco | Arts + Action
The Mural Debate Rages On: Arnautoff Murals Opened Up For Public At George Washington High
by Labor Video Project
Friday Aug 2nd, 2019 9:48 AM
The San Francisco Unified School District opened up Washington High School entrance so the public could view the Victor Arnautoff murals. The San Francisco School Board voted unanimously witht he support of SFUSD superintendent to spend $600,000 to destroy the murals. Board vice chair Mark Sanchez said it was "the first payment for reparations" to Native Americans for the genocide and theft of their lands.
Hundreds of people attended the opening and spoke out about the murals, the controversy and the state of public education. 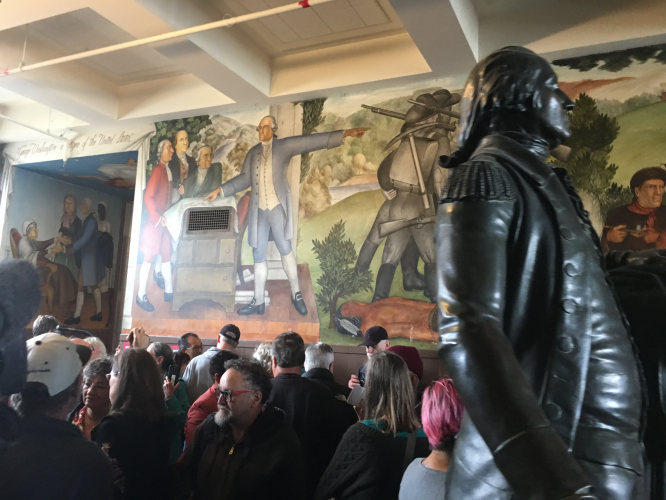 original image (4032x3024)
The Mural Debate Rages On: Arnautoff Murals Opened Up For Public At George Washington High In SF

The mural debate continued as the San Francisco Unified School District on 8/1/19 opened up George Washington High entrance for only two hours for viewing the world famous Victor Arnautoff murals.

Hundreds crowded in the entrance hall and viewed the controversial murals. They also gave their views about the proposed destruction of the murals voted unaniously for by the SFUSD school board and supported by union busting SFSUD superintendent Vincent Matthews.

For additional media:
Arnautoff Presentations: Beyond The Controversy: The GWHS & The Removal of Public Art
https://youtu.be/owFTM1G-TyU

Kay Weinkam takes a photo of the hand of an American Indian seen in S.F. artist Victor Arnautoff’s work that some deem to be offensive.Photo: Lea Suzuki / The Chronicle

Charles Barr (left) of San Francisco talks about the mural with his children Phoebe, 10, and Larry, 12. The school board has voted to cover it up, but many decry that to be censorship.Photo: Photos by Lea Suzuki / The Chronicle

A historic mural at San Francisco’s Washington High School opened briefly to the public Thursday for the first time since June, when school board members voted to whitewash the Depression-era work and catapulted themselves into a national debate over art and censorship.

More than 100 people jammed into the school, eager to see “Life of Washington” — actually a set of 13 frescoes — that would be on view for two hours only, from 1 to 3 p.m.

They snapped photos and pointed at scenes within the vast mural that the board has deemed offensive, and which some students have called disrespectful, because of two scenes in particular.

One depicts an African American man seated on a dock shucking corn as a white man points him out, as if to a buyer, and the other is of a Native American who lies dead, seemingly murdered.

On Thursday, Peter Arnautoff of Marin, the muralist’s grandson, was at Washington High with his son, Paul Arnautoff of San Francisco, hoping to shed light on the intentions of his grandfather, Victor Arnautoff. Born in Russia in 1896, Victor Arnautoff fled after the Bolshevik revolution, landing in Mexico and studying with famed muralist Diego Rivera. He died in 1979.

“I fully understand the sensitivity of seeing people in that (degraded) state,” Peter Arnautoff said. “That is precisely why my grandfather tried to portray this. Because history was being glossed over. He needed to have a counter-narrative.” As for students and their teachers, he said, the mural should offer “a teachable moment.”

As they enter school each morning, Washington High students climb a broad set of stairs between two walls on which the 1,600-square-foot painting depicts, in vivid colors, real and imagined scenes from the 18th century life of the first president.

There are the two controversial scenes — intended, mural supporters say, to show an unvarnished portrayal of the realities of Washington’s day.

Most of those who packed into the high school Thursday were vocal in their support of the mural.

“They’re idiots!” a man called out from across the crowded space, referring to the school board that voted 6-to-0 on June 25 to paint over the murals. A seventh board member, Rachel Norton, was absent.

Artist Carol Denney of Berkeley called the frescoes an “outstanding example of New Deal art,” and said the vast work is “so much more impressive in person than seeing just a piece of it.”

She had read Robert Cherny’s biography of Arnautoff and said she had learned from it that the mural “was a critical view of Washington’s life, and the depiction of African Americans and Native Americans was intended to convey the oppression of the times.”

“It’s astounding to me that anyone would want to destroy them,” she said.

Linda Fadeki-Richardson of San Francisco, a Nigerian American and one of the few black people who came to look at the frescoes, absolutely wants them destroyed.

“These murals are very offensive to me,” she said, pointing to the scene of the Native American lying dead, and that of the African American man shucking corn. “If you’re a kid, you are constantly reminded that you are nothing. That you’re a slave. You feel no sense of belonging. It creates anger.”

“It might be art, and it can also be racist; it can be both,” Collins said at the time.

Students were offended by the images, according to the board, whose members said that destroying the piece would be a way to repair racial injustices against African Americans and Native Americans.

Few, if any, students showed up at Thursday’s viewing. Before the June vote, student Briana King told district officials the scenes were “rude and disrespectful.”

Critics of “Life of Washington” are not the first Bay Area residents to call for painting over an Arnautoff mural — or the first to crowd in for a closer look.

In 1932, the Bay Area worked itself into a similar lather over the painter’s first solo commission, a set of frescoes for the Palo Alto Medical Clinic. In that work, Arnautoff painted four frescoes in color depicting modern medical techniques, such as the use of a fluoroscope to diagnose illness. Four smaller frescoes in black, white and gray showed outmoded medical methods, including a witch doctor exorcising evil spirits and a person pressing a board against an infant’s head to produce a healthy sloping forehead.

But the frescoes were flawed, according to sensibilities of the time, because some of the patients depicted were only partially clothed. Breasts were visible. Offense was taken.

“The startling result has set this little college town by the ears!” a Chronicle reporter wrote on Aug. 21, 1932, in a story called “Murals and Morals: Palo Alto’s Pulse Quickens,” that described drivers causing traffic jams along Homer Avenue as they slowed down to peer at the murals.

Fritz Roth, hired as a surgeon at the new Palo Alto clinic, threatened to whitewash the mural before he would work there.

But those who appreciated the Arnautoff work prevailed, and the murals stayed. Today they are being restored, said the artist’s grandson.

Victor Arnautoff and Diego Rivera came to San Francisco in 1931. Their works can be found throughout the city and include an Arnautoff fresco in Coit Tower and a Rivera mural at City College of San Francisco.

Painting over “Life of Washington” would cost at least $600,000, and an environmental review would take many months, the district has said. Because of the time and expense, the board has said it will also consider masking the work with curtains.

But the board may face another hurdle in covering up the artwork. Mural supporters are planning a 2020 ballot measure. The measure would prevent the school board from destroying “Life of Washington” or other New Deal murals without first getting approval from the Arts Commission and the Board of Supervisors or from the voters.

On Thursday, the ballot measure group said they had asked likely San Francisco voters how they felt about the school board “voting to spend $600,000 of school funds to permanently paint over 13 historic murals ...”

It’s unclear how many people responded to the survey. But the backers said more than three-quarters of them responded that they wouldn’t like it at all.

Local supporters could tap into national and international backers in their campaign to preserve the artwork. More than 400 educators and academics from around the world signed a petition to protect it.

The petition accused the board of voting “to destroy a significant monument of anti-racism. This is a gross violation of logic and sense.”

On Thursday, Noel Blincoe, a retired biomedical engineer from Pacifica, stood amid the frescoes and listened to Peter Arnautoff speak about his grandfather’s vision and how he hoped to save the work.

“You got hope?” Blincoe called out. Because destroying the art, he said, “would be horrible.”

https://youtu.be/GsEzelnSfrw
§Peter Arnautoff, The Great Grandson of Victor Arnautoff At The Opening
by Labor Video Project Friday Aug 2nd, 2019 9:48 AM 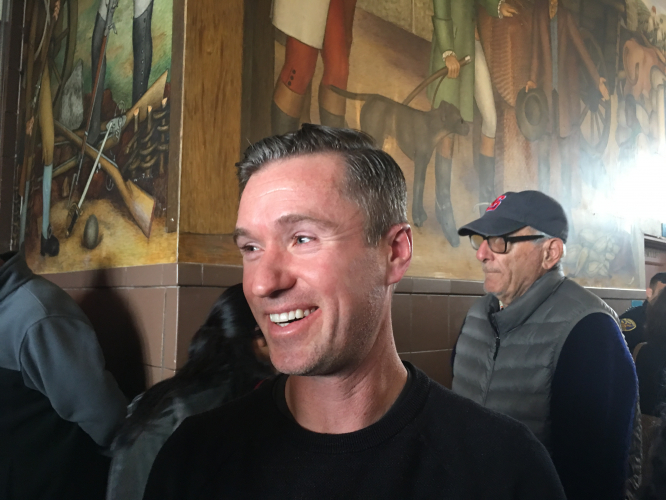 original image (4032x3024)
Peter Arnautoff, the great grandson of Russian American muralist Victor Arnautoff. attended the opening of the school for viewing of the world famous murals. He and his father were shocked and appalled that the board voted to destroy the murals.
https://youtu.be/GsEzelnSfrw
§George Washinton High Artist Richard Gillete
by Labor Video Project Friday Aug 2nd, 2019 9:48 AM 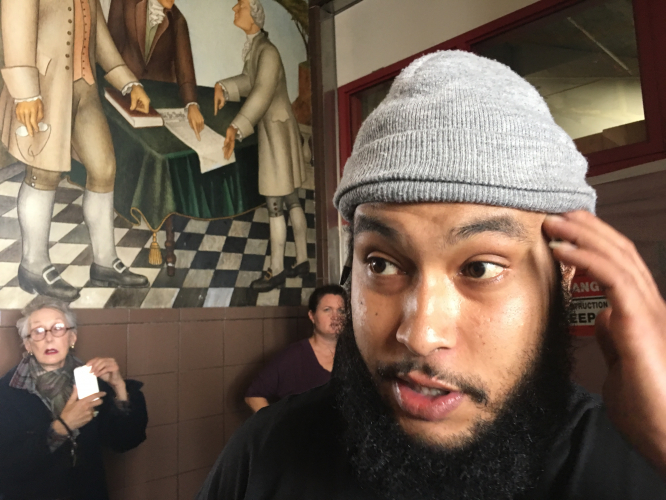 original image (4032x3024)
George Washinton High graduate Richard Gillete talked about how the murals inspired his own art. He supported keeping the murals up for all students.
https://youtu.be/GsEzelnSfrw
§Signage Was Put Up At The Opening To Provide Background To The Murals
by Labor Video Project Friday Aug 2nd, 2019 9:48 AM 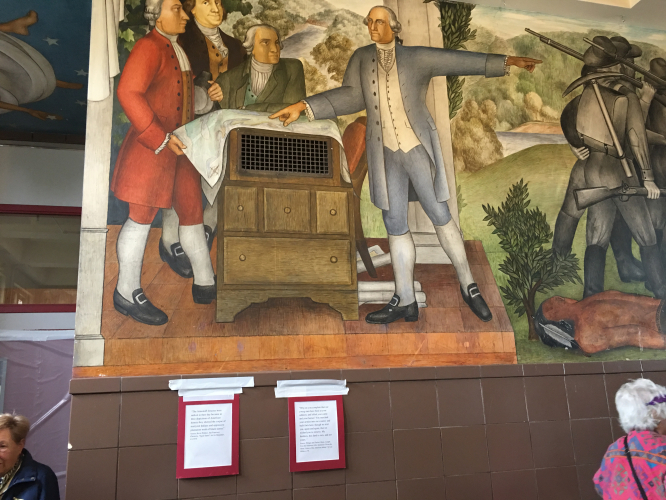 original image (4032x3024)
Supporters of the murals put up signage giving background to the murals. The SFUSD Board and Superintendent have refused to put up any signage explaining what the murals are. Also viewers talked about how "common core" and corporatization of education have stifled even learning about the history of the murals.
https://youtu.be/GsEzelnSfrw
§Arnautoff Murals Exposed Role Of Washington As Slave Owner
by Labor Video Project Friday Aug 2nd, 2019 9:48 AM 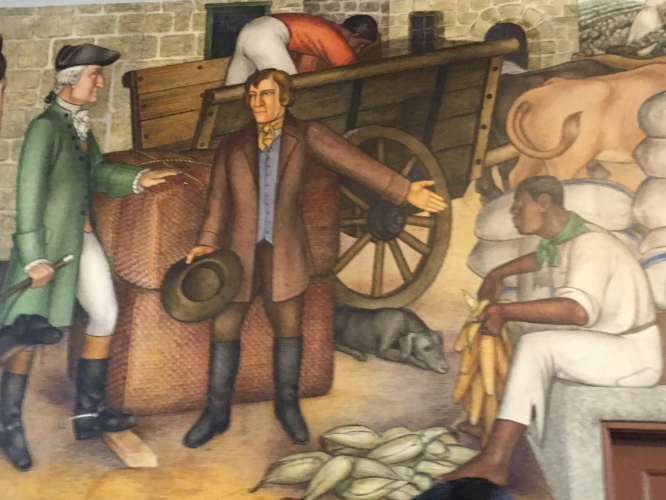 original image (4032x3024)
The Arnautoff exposed George Washington as a slave owner. Professor Robert Cherny who attended the opening and is auther of the biography of Victor Arnautoff said that Washington later had second thoughts about slavery.
https://youtu.be/GsEzelnSfrw
§
by Labor Video Project Friday Aug 2nd, 2019 9:48 AM 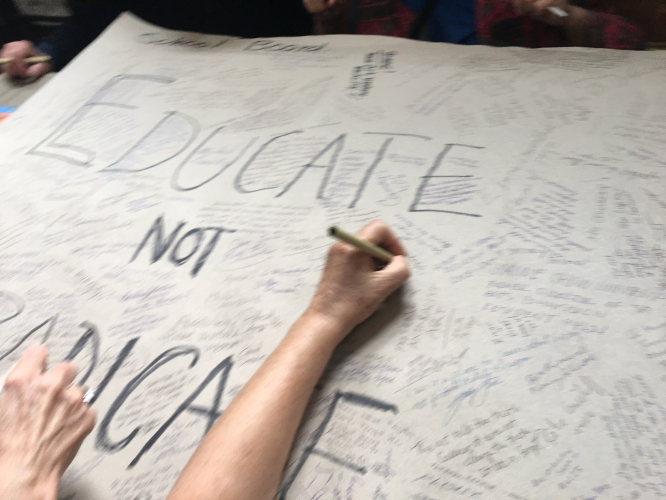 original image (4032x3024)
People signed the petition to the SFUSD board calling to Educate Not Eradicate.
https://youtu.be/GsEzelnSfrw
§Save The Murals Says GWHS Graduate Peggy Toy
by Labor Video Project Friday Aug 2nd, 2019 9:48 AM 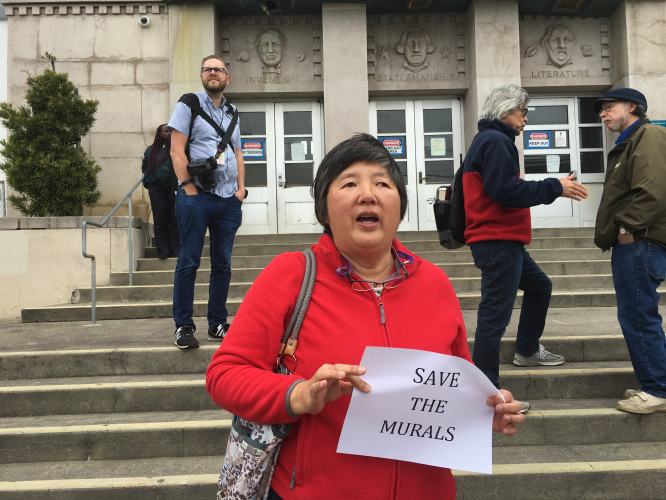 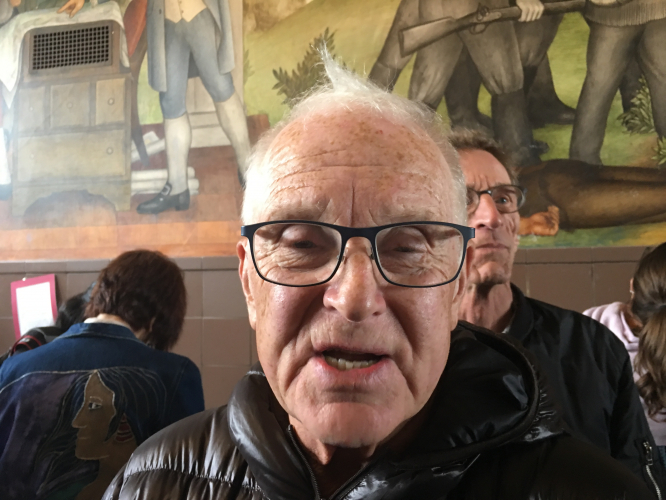 original image (4032x3024)
Historian, UC geographer and author Gray Brechin talked about the importance and relevance of the Victor Arnautoff murals for today and how the decision to destroy them had backfired.
https://youtu.be/GsEzelnSfrw
Add Your Comments
§More links
by San Francisco Marxist
Monday Aug 5th, 2019 5:27 PM
San Francisco Board of Education to decide on the fate of historic murals said to be “offensive”