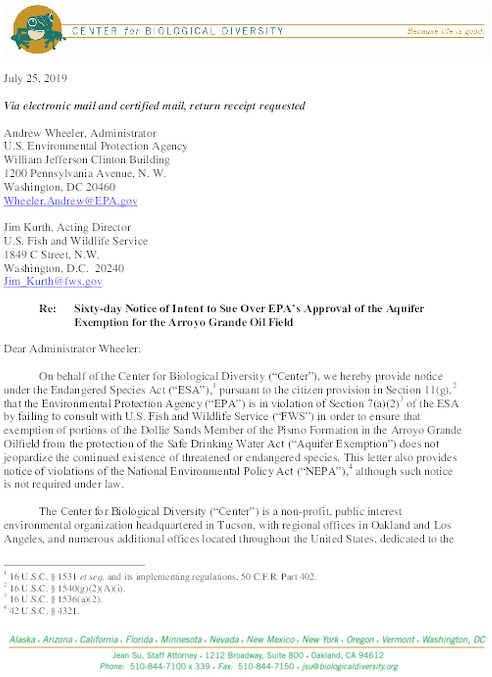 Today’s notice argues that Trump’s EPA violated the U.S. Endangered Species Act when it failed to consult with the U.S. Fish and Wildlife Service to ensure the exemption would not jeopardize the survival of threatened or endangered species like the California red-legged frog.

“The Trump administration’s decision to let the oil industry turn this aquifer into a toxic waste dump was reckless and shortsighted,” said Maya Golden-Krasner, deputy director of the Center’s Climate Law Institute. “Injecting chemicals like benzene into the aquifer would be a devastating blow to the area’s threatened and endangered wildlife, from rare flowers to the California red-legged frog.”

Freeport-McMoRan, which owned the Arroyo Grande oilfield before selling it to Sentinel Peak Resources, submitted the aquifer exemption application in 2015. California’s Division of Oil, Gas and Geothermal Resources approved the application and submitted it to the EPA in February 2016 for final approval. The EPA approved it on April 30, 2019.

By allowing oil-waste disposal into the aquifer, the exemption also enables Sentinel to move forward with plans to drill hundreds of new wells and massively increase daily oil production.

As noted in previous comments submitted to California’s oil regulators by the Center, the aquifer exemption application failed to mention the company’s plans to expand operations in the oilfield. It also did not include any analysis of what will happen to the aquifer if that expansion proceeds — including possible changes in pressures underground and the potential for inducing fractures that could transport pollution to other water sources.

Endangered and threatened species most likely to be harmed by oil-waste injection into the aquifer include the rare Pismo clarkia flower, California red-legged frog, tidewater goby and South-Central Coast steelhead trout. The drilling expansion enabled by the exemption could affect species in the Pismo State Beach area, including southern sea otters and western snowy plovers.

“The harms of ramping up destructive oil extraction in this oilfield will reverberate throughout San Luis Obispo County and beyond,” Golden-Krasner said. “The careless approval of this aquifer exemption is just one example of how state and federal regulators fail to protect us from this dirty industry. It’s time for Gov. Gavin Newsom to commit to a fair and thoughtful phaseout of fossil fuel extraction in California.”


https://biologicaldiversity.org/w/news/press-releases/lawsuit-launched-over-trump-administrations-approval-of-oil-waste-dumping-in-californias-arroyo-grande-aquifer-2019-07-25/
https://www.biologicaldiversity.org/
Add Your Comments
Support Independent Media
We are 100% volunteer and depend on your participation to sustain our efforts!