Add an Event
Newswire
Calendar
Features
Home
Donate
From the Open-Publishing Calendar
From the Open-Publishing Newswire
Indybay Feature
Publish to Newswire
Add an Event
Related Categories: San Francisco | Education & Student Activism | Labor & Workers
Hands Off UESF Teacher Margaret Reyes! Protest At SF Court Hearing
by Labor Video Project
Tuesday Jul 30th, 2019 11:00 AM
SFUSD UESF teacher Margaret Reyes was being bullied by her principal and then after she turned 40 she was placed in the PAR program with a coach being her principal who was bullying her. She refused to go into PAR and was fired with illegal Skelly hearings. She challenged the improper hearings in SF Superior Court without the support of her union UESF. 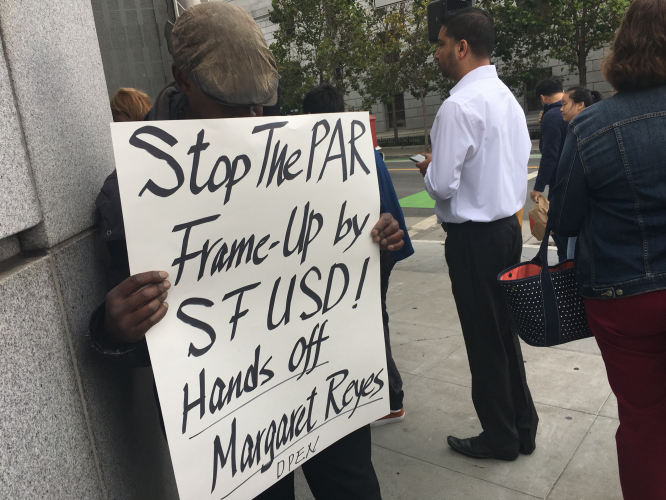 original image (4032x3024)
UESF teacher Margaret Reyes spoke out in front of a San Francisco Court house on July 29, 2019 to challenge the illegal Skelly hearing the district had used to terminate her.

She charged that the Peer Assisted Review Program PAR was being used as well to discriminate against teachers over 40 years of age and against Afrian American teachers and Latino teachers.
She said she recieved evidence of this from former UESF president Lita Blanc.

Additionally former BFT steward Brian Crowell had extensive documentation from LAUSD and other districts about the discriminatory use of this program.

The SFUSD superintendent Vincent Matthews and the SFUSD Board of Education have spent tens of thousands and possibly hundreds of thousands of dollars on lawyers to illegally drive out these teachers out using the PAR program. They also demand that teachers must sign a "non-disclosure" agreement when they are forced into PAR.

She also reported that the UESF-CTA leadership had refused provide a lawyer for the hearing on the improper Skelly hearing and that dissident teachers had also been targeted by the District and some union officials for placement in the PAR program.

The SFSUD has also hired additional lawyers from a union busting firm according to Reyes and Michael Quinn the chief SFUSD counsel had tried to extort her and intimidate here by sending her information that had been put under seal by a Federal judge.

The SF Superior Court judge Ethan Schulman demanded to know about PAR although that was not the issue in the case. He also did not allow her time to provide additional evidence even though she was forced to represent herself without a lawyer because UESF CTA refused to defend her legally.

This rally was sponsored by Defend Public Education NOW!
Additional media:
The Fight Against PAR, The Attack On Teachers & Worker Rights With Educator Brian Crowell
https://youtu.be/7zj3PVj8-Aw

Another Voice for Teachers
The Berkeley Schools Labor Caucus, formed to pressure the teachers' union to take a tougher stance on protecting workers' rights, is feeling more emboldened in light of a recent Supreme Court decision.
https://www.eastbayexpress.com/oakland/another-voice-for-teachers/Content?oid=19937593 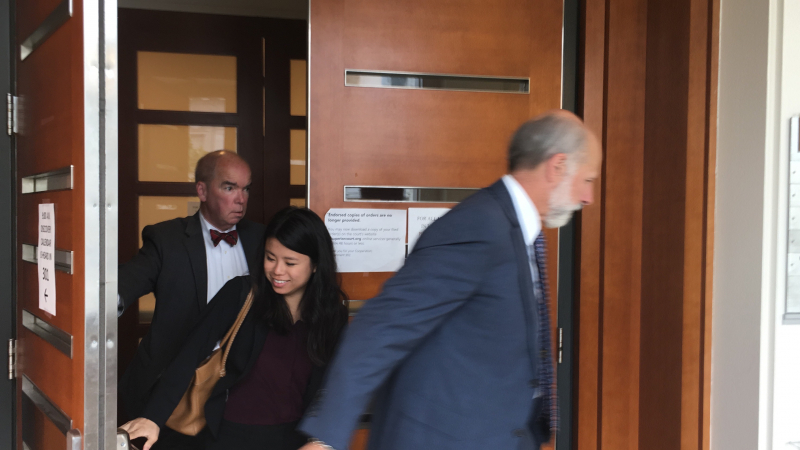 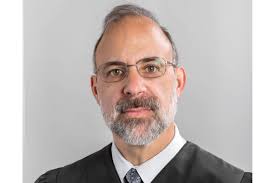 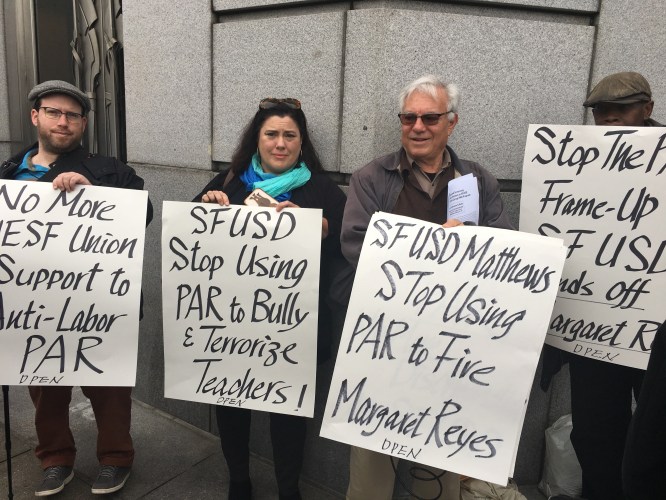 original image (4032x3024)
A speakout and rally was held for UESF teacher Margaret Reyes.
https://youtu.be/tpU94mU-EBk
Add Your Comments
Support Independent Media
We are 100% volunteer and depend on your participation to sustain our efforts!