Add an Event
Newswire
Calendar
Features
Home
Donate
From the Open-Publishing Calendar
From the Open-Publishing Newswire
Indybay Feature
Publish to Newswire
Add an Event
Related Categories: Central Valley | Environment & Forest Defense | Government & Elections | Racial Justice
Newsom Tours Kern Co. Oil Spill as Locals Call for Heath & Safety Protections
by Dan Bacher
Thursday Jul 25th, 2019 10:29 AM
“While this incident occurred in an isolated area, other similar oil production-related incidents have occurred in proximity to Kern County communities,” said Juan Flores, a Kern County community organizer with the Center on Race, Poverty and the Environment. “It is time that state leadership and decision-makers take action and pay attention to the gravity of such incidents. 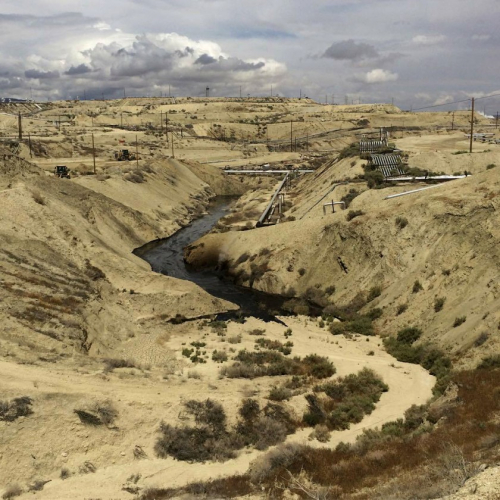 original image (840x840)
MCKITTRICK, CA — At a time when oil and gas drilling continues to expand in California, Governor Gavin Newsom on July 24 visited the site of a big oil spill in Chevron’s Cymric oilfield in Kern County,

The spill has seeped 974,400 gallons of a hazardous mix of oil and wastewater into the surrounding area for over two months, according to the latest data from the Division of Oil, Gas and Geothermal Resources (DOGGR) of the California Department of Conservation, the agency responsible for regulating the fossil fuel industry in the state.

"I'm seeing progress," Newsom told reporters during a media availability during his visit to the site, where the oil and water mixture has spilled into a dry creek bed.

During the media availability, the governor pledged to continue his work reforming DOGGR following his firing of the head of the agency after the Fracktracker Alliance and Consumer Watchdog released a report revealing that fracking permits had increased during his time in office.

“I want to focus not just on demand but supply, and that, I think, is a new approach in this state with this new administration,” the governor told The LA Times. (https://www.latimes.com/california/story/2019-07-24/assignment-newsom-tours-bakersfield-oil-spill)

However, on the day after the Governor fired the DOGGR head, Newsom said he does not have the legal authority to impose a moratorium on permits for fracking operations in California, according to Ted Goldberg at KQED. (https://www.kqed.org/news/11762903/lawmakers-push-to-give-newsom-power-to-call-fracking-moratorium-setting-stage-for-oil-industry-battle)

"The governor of California cannot do that," Newsom told reporters on July 12.

The spill has occurred at a site that employs steam injection, described as an “extreme oil-extraction technique” by environmental justice advocates. The site continues to leak and rather than focusing on stopping the spill, Chevron officials said Monday that that the company plans to appeal a state-mandated order to ‘take all measures’ to stop it and prevent future occurrences, according to a statement from the Last Chance Alliance.

While environmental justice, climate and community groups in the Central Valley affiliated with the Last Chance Alliance say they are encouraged by the governor’s visit to the site of the spill, they are urging him to take immediate action to protect Californians against the state’s fossil fuel industry, the most powerful corporate lobby in Sacramento.

“While this incident occurred in an isolated area, other similar oil production-related incidents have occurred in proximity to Kern County communities,” said Juan Flores, a Kern County community organizer with the Center on Race, Poverty and the Environment. “It is time that state leadership and decision-makers take action and pay attention to the gravity of such incidents. It is time that we put our money where our mouth is and set in place a buffer zone of no less than 2,500 feet to protect our communities, ecological areas and the environment as a whole.”

“We applaud the governor for coming to see first-hand the McKittrick spill,” said Cesar Aguirre, a Kern County organizer with Central California Environmental Justice Network. “The McKittrick spill goes to show that both the regulated industry and regulators are not meeting their responsibility to protect public health and the environment.”

“Even after the governor and his administration requested that action be taken immediately, the spill continued – to what end do you regulate a declining and irresponsible industry? We have seen issues like this before with Nelson Court, where families are still dealing with the ramifications of a leaking gas pipe. CCEJN would like to invite the governor on a tour throughout Kern County to see how this industry devastates the health of communities to understand the full scope of the oil and gas industry’s impact,” Aguirre concluded.

The oil and gas mixture continues to seep at the spill site. On July 18, DOGGR issued a statement that on Wednesday, July 17, “DOGGR field inspectors reported a small seepage of oil and water from one of three surface expression vents where the flow had previously ceased.”
“DOGGR notified Chevron, and the Acting Oil and Gas Supervisor amended the July 1, 2019 Notice of Violation to expand the well shut-in radius from 600 to 1,200 feet. The Acting Oil and Gas Supervisor and DOGGR field engineers were on site Thursday,” reported DOGGR.

On Friday, July 12, Jason Marshall, the acting oil and gas supervisor at DOGGR, ordered Chevron to immediately “take all measures” to the stop the flow and “prevent any new surface expressions” near the oil well site.

The huge oil spill should be no surprise, according to environmental justice advocates. The agency responsible for regulating the fossil fuel industry in California, (DOGGR), “adopted weaker restrictions on the practice earlier this year, making these operations even more dangerous,” according to the Last Chance Coalition.

Despite California’s “green” image, Governor Jerry Brown’s oil and gas regulators approved over 21,000 new oil and gas wells, including over 200 new offshore wells, according to a 2018 analysis of Department of Conservation data by the Fracktracker Alliance. The approval of oil and gas drilling permits has increased even more under the Newsom Administration to date.

Background: Oil and gas drilling has expanded under  Newsom

The news of the Kern County spill came just hours after Governor Newsom fired DOGGR head Ken Harris for doubling the fracking permits issued during his time as governor — without his knowledge, according to Newsom - and reports of conflicts of interest among eight senior officials, as documented in my article on a groundbreaking report by Consumer Watchdog and the Fractracker Alliance: http://www.dailykos.com/…

From January 1 to June 3 of 2018, the State’s Division of Oil, Gas, and Geothermal Resources (DOGGR) approved 2,365 new oil and gas well permits and 191 fracking permits, according to Department of Conservation data analyzed by the two groups.

The data reveals that this year regulators have increased the number of permits granted for drilling new wells by 35.3%, well reworks by 28.3%, and fracking by 103.2%, as compared to the permitting rate during the final year of the Brown administration in 2018.

Even more alarming, of the 2,365 well permits issued, 1064 or 45% of them benefitted oil companies invested in by DOGGR officials, the groups reported.

This latest disaster takes place in a state where Big Oil and Big Gas have captured the regulators from top to bottom. The oil industry is the largest and most powerful corporate lobby in Sacramento and the Western States Petroleum Association (WSPA), the trade association for the oil industry in California and other Western states, is the largest and most powerful corporate lobbying organization.

For more information, go to: http://www.dailykos.com/...