Add an Event
Newswire
Calendar
Features
Home
Donate
From the Open-Publishing Calendar
From the Open-Publishing Newswire
Indybay Feature
Publish to Newswire
Add an Event
Related Categories: U.S. | Immigrant Rights
Lessons of Nashville: The working class and the defense of immigrants
by Patrick Martin (WSWS Repost)
Thursday Jul 25th, 2019 10:05 AM
In this commentary from the World Socialist Web Site, Patrick Martin describes how a recent viral video helps expose fundamental lies behind doomsday predictions of an America on the brink of race war. 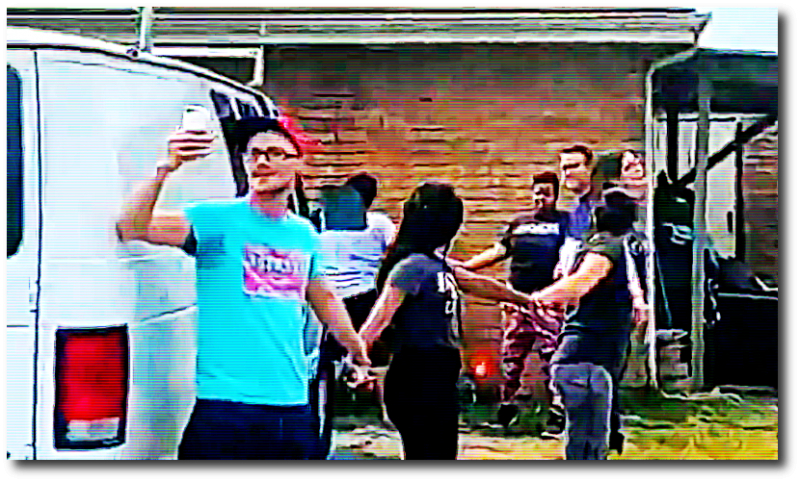 Lessons of Nashville: The working class and the defense of immigrants

The remarkable incident in Nashville, Tennessee, Monday, described in an article posted yesterday on the World Socialist Web Site, has important political lessons for the struggle to defend immigrants and oppose the Trump administration’s attacks on democratic rights.

Residents of the working-class Hermitage neighborhood in the Tennessee capital defended an immigrant father and his son, after agents of Immigration and Customs Enforcement sought to detain the father for deportation. The father and son refused to leave their van, parked in their own driveway, after the ICE agents accosted them.

When neighbors became aware of what was happening, they spread the word, and a dozen people turned out to bring aid to the immigrant father. They brought a gas can so he could keep his motor running and the air conditioning on, as well as water and sandwiches.

For four hours, the immigrant father and his son remained in their van, sheltered by their neighbors who at times locked arms in a human chain to prevent the ICE agents from approaching, as the agents repeatedly attempted to lure their targets to come outside. Eventually, as they could produce only an administrative order but no judicial warrant, the agents left empty-handed.

Comments given to the media by those who participated in the resistance to ICE give a glimpse of the real feelings of class solidarity and humanitarianism towards immigrants that actually motivate the great mass of working people. One said the confrontation with the ICE agents “changed how she feels about this country.”

Angela Glass told the Nashville Scene: “These people, they’ve been living there for 14 years. They don’t bother anybody. Our kids play with their kids. It’s just one big community. And we don’t want to see anything happen to them. They’re good people. They’ve been here 14 years, leave them alone. To me, they’re considered Americans.”

Another neighbor, Felishadae Young, told news station WZTV, “I was real scared about what was going on. It put a lot of fear in me, because it could be me, it could be my family. It could be anybody. It could be your neighbors, just like it was my neighbor today.” She added, “I know they’re going to come back, and when they come back, we’re coming back.”

Such comments give the lie to the incessant efforts by all factions of the US ruling elite to elevate race and nationality as the fundamental social characteristic, in order to divide the working class and pit workers against each other.

Trump, of course, vilifies immigrants in the most unrestrained and racist terms, seeks to whip up a pogrom atmosphere against them, and portrays American-born workers as a whole as hostile and resentful of the efforts of immigrants to live and work in America.

The advocates of identity politics who dominate the Democratic Party feed this Trump narrative by portraying white workers as in the grips of racial hysteria against minorities. The most unrestrained version of such slanders has been expressed by media pundits like Charles Blow of the New York Times, who recently wrote, “White people and whiteness are the center of the Trump presidency,” adding that “fellow citizens—possibly a third of them” were white racists who demonstrated their racism through continued support for Trump.

Against this doomsday picture of America on the brink of race war, one must counterpose the Nashville video of working people, white and black, male and female, linking arms to defend an immigrant father and his son from detention and deportation.

The reaction of the Nashville authorities demonstrates the concern of the US ruling elite over the deep unpopularity of Trump’s anti-immigrant persecution, and the fear that the round-up and jailing of immigrants and their families may provoke an explosion of popular opposition.

The ICE agents in Nashville, when confronted by hostile local residents, called the police. But local officials instructed the police not to assist in the detention of the immigrant father, only to “keep order,” i.e., make sure that the crowd did not attack the ICE agents. The mayor of Nashville and two of his three challengers in the upcoming August 1 mayoral election issued statements expressing sympathy for those who supported the immigrant family and opposing any role for local police in enforcing Trump’s immigration policy.

The growing divergence between government policy and popular sentiments explains the failure, up to this point, of the ICE raids ordered by Trump against immigrant neighborhoods in ten major cities. ICE has detained only 35 of the 2,000 immigrants initially targeted for detention and immediate deportation in the raids that Trump announced earlier this month.

Trump administration officials and his media supporters have complained that “activists” have alerted immigrants to their legal rights, encouraged them to assert them more aggressively, and sought to mobilize material support for those facing the threat of arrest and deportation.

More broadly, opposition to Trump’s persecution of immigrants found expression in demonstrations in more than 700 cities involving tens of thousands of working people, youth and students. Many thousands have participated in social media activities to alert immigrant neighborhoods ahead of ICE raids and to publicize evidence of US government atrocities, such as the mistreatment of detained immigrants, particularly children.

The popular resistance to mass deportations is in sharp contrast to the role of the Democratic Party, which last month approved an additional $4.6 billion in funding for Trump’s regime of detention facilities in which immigrants are subjected to family separation, overcrowding, semi-starvation, and the deliberate promotion of disease through neglect and denial of medical care.

This week, in the bipartisan budget deal announced by Trump Monday in a triumphant tweet, the congressional Democratic leadership has agreed to drop any legislative effort to block Trump’s diversion of billions in Pentagon funds to build his long-promised wall along the US-Mexico border, as well as to provide full funding for all the anti-immigrant operations of the Department of Homeland Security, which includes ICE, the Border Patrol, and the network of concentration camps run by the federal government and private contractors.

The defense of immigrants—and the struggle to defend the democratic rights of all working people, regardless of race, national origin, gender or sexual orientation—is the responsibility of the working class. It cannot be conducted through the Democratic Party and the corporate-controlled two-party system. It requires the independent political mobilization of the working class on the basis of a revolutionary socialist program, seeking to unite workers of every country in a common struggle against capitalism.

https://www.wsws.org/en/articles/2019/07/2...
Add Your Comments
Support Independent Media
We are 100% volunteer and depend on your participation to sustain our efforts!