Newswire
Calendar
Features
Home
Donate
From the Open-Publishing Calendar
From the Open-Publishing Newswire
Indybay Feature
Publish to Newswire
Add an Event
Related Categories: U.S. | Police State & Prisons | Racial Justice
A3 Newsletter: Zulu Whitmore Court Date and More
by International Coalition to Free the Angola 3
Friday Jul 19th, 2019 4:00 PM
The latest issue of our newsletter has just been released, spotlighting the important case of Kenny "Zulu" Whitmore and the recent work of Southern University Law Professor Angela A. Allen-Bell & her students. We also update you on the recent activities of Robert King and Albert Woodfox, including Albert's trip abroad to the United Kingdom. 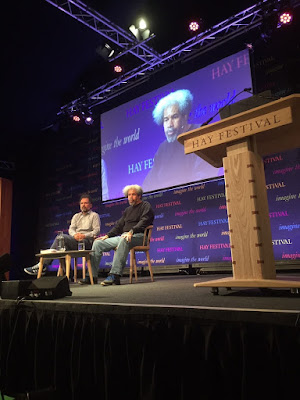 (PHOTO: Albert's book tour takes him to Wales for the Hay Festival, where he is shown onstage with Sarfraz Manzoor.)

With summer half over, we want to share with you some of the activity going on around Angola 3 and news in general of A3 supporters and comrades.

Robert has been laying low the last few months, working on his own projects but he's got quite a few things scheduled once September rolls around. We'll keep you posted. 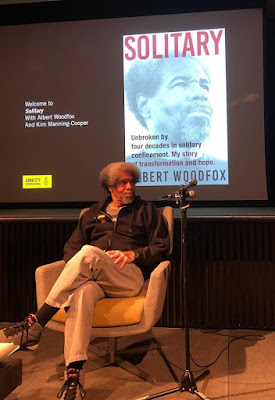 Albert traveled to England for an Amnesty International event in London (shown in the photo above) and to Wales for the Hay Festival where he spoke alongside Sarfraz Manzoor. While in the UK, Albert was interviewed by the BBC's "Hard Talk" radio show and for the Channel 4 show "Ways to Change the World" (also watch the Channel 4 interview at Albert's home in New Orleans, which aired in May).

At the end of June, Albert traveled to the meet with the Board of Directors of the NAACP Legal Defense Fund in Washington D.C.and two weeks later in July, he participated in the LDF's 40th Annual Capital Punishment Training Conference in Tarrytown, New York.

Albert was also involved in the press conference held at Loyola University announcing the release of a study on the use of solitary confinement in Louisiana, a collaboration between VOTE, the ACLU of Louisiana, Solitary Watch, the Jesuit Social Research Institute / Loyola University New Orleans and the new Louisiana Stop Solitary Coalition. The wide range of news coverage included: The Advocate, The Advocate's Gambit, and the San Francisco Chronicle / Associated Press.

August is looking pretty quiet for both guys - time for them to spend with family and friends in between staying ever active in their efforts to spread the word about solitary confinement, prison conditions as a whole and the state of justice in America.

We hope you'll take a look at the awards and accolades that Angela A. Allen-Bell, an A3 supporter and Professor at Southern University Law Center has been receiving. We are thrilled to see that Prof. Bell's groundbreaking work is getting her the credit that she deserves.

We are sad to say that Kenny "Zulu" Whitmore's anticipated court date this month has been postponed. You can read the statement issued by Zulu's supporters in the section below.

Congratulations To Our Friend, Professor Angela A. Allen-Bell! 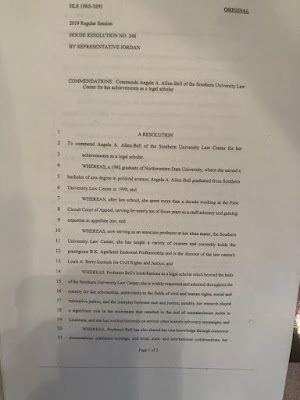 Longtime A3 supporter Angela A. Allen-Bell is a Professor at Southern University Law Center in Louisiana, as well as the Director of SULC's Louis A. Berry Institute for Civil Rights and Justice.

In May, the House of Representatives of the Legislature of Louisiana passed House Resolution No. 248, which commended Professor Bell "for her achievements as a legal scholar; does hereby recognize and record for posterity the tremendous pride and honor that she brings to this state; and does hereby extend to her best wishes for continued success in future endeavors."

Read the full resolution by clicking on the photo above (page one) and the photo below (page two). When you click on the photo, the image will get bigger and the text readable. 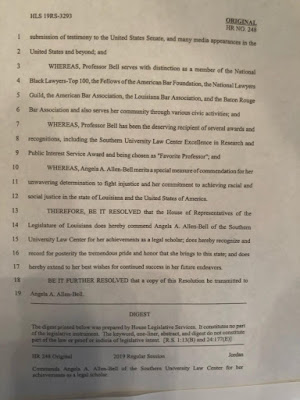 Prof. Bell has brought a pioneering approach to integrating community activism into her classes. Recently her student Justin Bullard succeeded in his class project's goal of getting Panther elder and longtime A3 supporter Malik Rahim's house designated as a historic landmark.

Powerful new articles written by her students have been published by the American Bar Association. Hayden Carlos and Cameron Pontiff wrote Trick or Treatment?, where they confront "the horrific intersection of race, mental health, poverty, and incarceration in Louisiana." Their classmates Chelsea Hale and Meghan Matt wrote The Intersection of Race and Rape Viewed through the Prism of a Modern-Day Emmett Till, which examined "the historical practice of exploiting and violating the bodies of African American women with impunity and how African American defendants accused of raping white women are treated differently under the law."

The A3 Coalition knows firsthand how Prof. Bell brought her amazing intellect and work ethic into the struggle to free Herman and Albert and we join the Louisiana Legislature in sending "best wishes for continued success in future endeavors." Thanks for all the hard work! 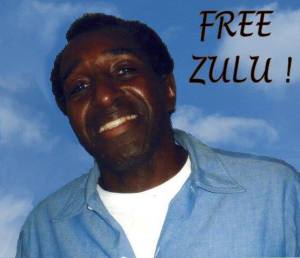 Last newsletter we told you about an important court date for Kenny "Zulu" Whitmore to he held on July 22. However, in a recent statement, supporters of Zulu were disappointed to report that this hearing has been postponed:

"Judge Erwin in the 19th judicial district court granted the State another 60-day extension without Zulu's lawyers being present in court. A statement from his legal team says, this is not over by a long shot."

Current information says the court date will be September 20, but we will keep you updated of any changes. Also be sure to visit the Zulu Support News Blog.

Show our brother some love with letters of support!

Trump's Racism Is Not Blundering - It Is Tactically Deliberate (Truthout)