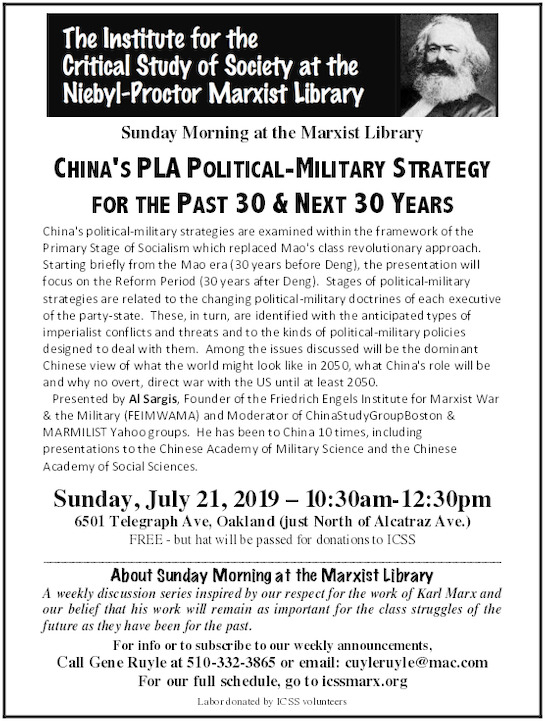 China's political-military strategies are examined within the framework of the Primary Stage of Socialism which replaced Mao's class revolutionary approach. Starting briefly from the Mao era (30 years before Deng), the presentation will focus on the Reform Period (30 years after Deng). Stages of political-military strategies are related to the changing political-military doctrines of each executive of the party-state. These, in turn, are identified with the anticipated types of imperialist conflicts and threats and to the kinds of political-military policies designed to deal with them. Among the issues discussed will be the dominant Chinese view of what the world might look like in 2050, what China's role will be and why no overt, direct war with the US until at least 2050.

For info or to subscribe to our weekly announcements,
Call Gene Ruyle at 510-332-3865 or email: cuyleruyle [at] mac.com
For our full schedule, go to icssmarx.org
Labor donated by ICSS volunteers
END_OF_DOCUMENT_TOKEN_TO_BE_REPLACED
Added to the calendar on Mon, Jul 15, 2019 5:49AM
Add Your Comments
Support Independent Media
We are 100% volunteer and depend on your participation to sustain our efforts!