General Elections in India: Modi’s (Neo)-Fascism vs. Social Democrats and the Left 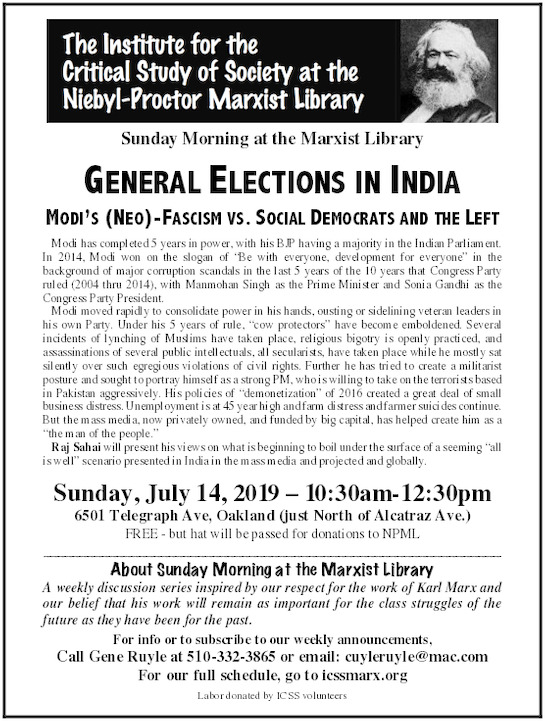 General Elections in India
Modi’s (Neo)-Fascism vs. Social Democrats and the Left

Modi has completed 5 years in power, with his BJP having a majority in the Indian Parliament. In 2014, Modi won on the slogan of “Be with everyone, development for everyone” in the background of major corruption scandals in the last 5 years of the 10 years that Congress Party ruled (2004 thru 2014), with Manmohan Singh as the Prime Minister and Sonia Gandhi as the Congress Party President.
Modi moved rapidly to consolidate power in his hands, ousting or sidelining veteran leaders in his own Party. Under his 5 years of rule, “cow protectors” have become emboldened. Several incidents of lynching of Muslims have taken place, religious bigotry is openly practiced, and assassinations of several public intellectuals, all secularists, have taken place while he mostly sat silently over such egregious violations of civil rights. Further he has tried to create a militarist posture and sought to portray himself as a strong PM, who is willing to take on the terrorists based in Pakistan aggressively. His policies of “demonetization” of 2016 created a great deal of small business distress. Unemployment is at 45 year high and farm distress and farmer suicides continue. But the mass media, now privately owned, and funded by big capital, has helped create him as a “the man of the people.”venus
Raj Sahai will present his views on what is beginning to boil under the surface of a seeming “all is well” scenario presented in India in the mass media and projected and globally.

For info or to subscribe to our weekly announcements,
Call Gene Ruyle at 510-332-3865 or email: cuyleruyle [at] mac.com
For our full schedule, go to icssmarx.org
Labor donated by ICSS volunteers
END_OF_DOCUMENT_TOKEN_TO_BE_REPLACED
Added to the calendar on Sat, Jul 13, 2019 2:04PM
Add Your Comments
Support Independent Media
We are 100% volunteer and depend on your participation to sustain our efforts!