Add an Event
Newswire
Calendar
Features
Home
Donate
From the Open-Publishing Calendar
From the Open-Publishing Newswire
Indybay Feature
Publish to Newswire
Add an Event
Related Categories: Central Valley | Anti-War
Fresno’s Radical Past
by Mike Rhodes
Friday Jul 12th, 2019 3:18 PM
This is an article about the 50 Years of Resistance event held on June 22, 2019 in Fresno. We brought together Anti-War and Draft Resistance activists who were active in Fresno 50 years ago. The photo below shows this young woman being arrested at an antiwar protest at Fresno State, probably on May 23, 1970. This photo is from the Special Collections department at Fresno State. 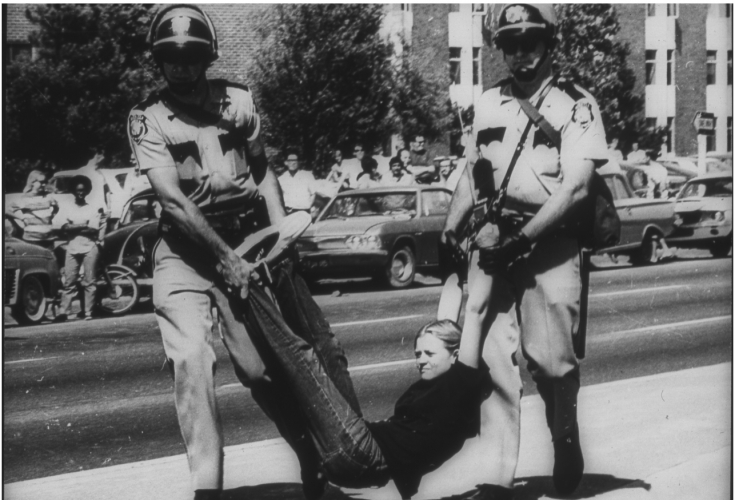 original image (1286x874)
Last month, we recovered an amazing period in this city’s past that was almost lost forever. Revealed was a rich tapestry of antiwar and draft resistance actions that shook this community and played a part in ending the Vietnam War.

Activists from around the country and as far away as Ireland came to Fresno on June 22 for a reunion where they shared their stories in a gathering at the Unitarian Universalist Church, a cosponsor of the event.

Before the event, several of us—Doug Rippey, Joel Eis and myself—spent months trying to locate photos, memoirs and news clippings from antiwar actions in the late 1960s and early 1970s. We were shocked to learn that local TV stations have not kept any video archives from those years.

Gene Haagenson, a longtime ABC Channel 30 reporter, told me that his station film archives only go back to 1976 and that the other TV stations have taken their film to the dump!

I asked reporter and photographer John Walker at the Fresno Bee if their archivist could find us some of the photos they took at the time. I was told that they no longer have an archivist, but Walker generously spent time finding the original photos, scanning and sending them to us.

The Fresno State Library and Collegian newspaper only had a handful of photos that they were able to share with us. Now we are in consultation with them to set up a permanent collection of the photos and stories we have uncovered.

Out of the photo albums of the participants of those exciting times we have received an enormous and priceless collection that weaves together the stories and drama of those days.
Joel Eis has written a book that will be published soon that talks about those days in Fresno that almost no one has heard about. For example, Joel tells us about one memorable instance of being harassed by government agents while at housing used by members of the Fresno Draft Resistance in a fig orchard near First Street and Sierra Avenue:

The next day was Saturday. At seven o’clock in the morning, Karen and I (in separate rooms) were awakened by the punishing WHUMP! WHUMP! sound of a US Army Huey helicopter hovering less than three-hundred feet off the ground, directly over my house in the middle of the fig orchard. The din was so loud that Karen and I—the only people in the house—had to yell at each other, head-to-head, in order to be heard. The chopper was pitched over on its side and a soldier was strapped in the side gun turret with a camera, taking pictures of our house.

The reason for this special attention was that we were part of the antiwar movement in Fresno, California. As far as they were concerned, we might have been “peaceniks,” but for them we were the Enemy, and therefore a legitimate target for harassment. I didn’t know what to do.

Karen said, “I know how to get them to come closer.”

She went to the upstairs room and climbed out onto the roof of the house. She was an attractive, well-built young woman. Karen took off her blouse and showed the Army boys what they were fighting to protect. The excited photographer signaled the pilot, and the chopper was soon another fifty feet lower. I could almost read the soldier’s name over his pocket as he slammed away with the camera, taking pictures of Karen.

Karen slowly reached into a window of the bedroom near her perch on the roof and pulled Paul’s M1-carbine automatic rifle out through the window, then opened fire on the chopper. Shells flew away from her bare arms, torso, and shoulders as fast as she could pull the trigger.

She got off eight or ten rounds before the army retreated.
Totally stunned by her action, I yelled, “What the hell did you do that for? Now they’re gonna be out here to bust us!”
Putting her shirt back on, Karen yelled down, “Doubt it. They’d have to explain what the fuck the Army was doing takin’ pictures of us from a chopper in the first place.”

The Army must have figured it out the way Karen did.

The cops never showed up.

That was an excerpt from Eis’s book Standin’ in a Hard Rain: The Making of a 1960s Revolutionary (being published soon) that reminds us what life was like in Fresno during the struggle to end the Vietnam War. There was also music, potlucks at the Resistance House and lots of good times.

The reunion event held at the UU church was attended by more than 200 people and featured the wonderful music of Agustín Lira and Patricia Wells and included speaker David Harris. Harris graduated from Fresno High in the mid-1960s and went on to become a national leader of the Draft Resistance movement, married folk singer Joan Baez and spent more than a year in prison for his opposition to the immoral and unjustifiable war in Vietnam.

If you missed the event and would like to see all of the speakers and musicians, it is available online through the Community Media Access Collaborative in Fresno or on a DVD. Contact me to get a copy of the DVD.

This event was sponsored by Peace Fresno, the Fresno Center for Nonviolence, the Human Rights Coalition of the Central Valley, the Women’s International League for Peace and Freedom, the Unitarian Universalist Church and the Community Media Access Collaborative and was supported by this newspaper.
*****
Mike Rhodes is a past editor of the Community Alliance newspaper and helped organize the 50 Years of Resistance event. Contact him at mikerhodes [at] comcast.net. 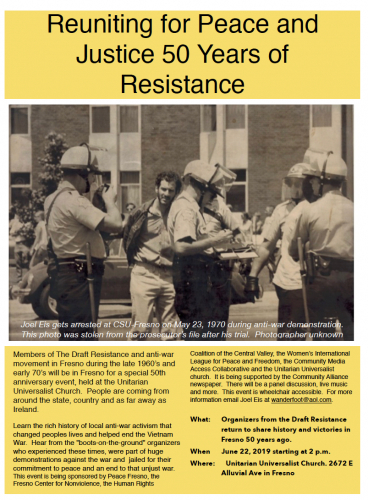 original image (803x1091)
Add Your Comments
Support Independent Media
We are 100% volunteer and depend on your participation to sustain our efforts!