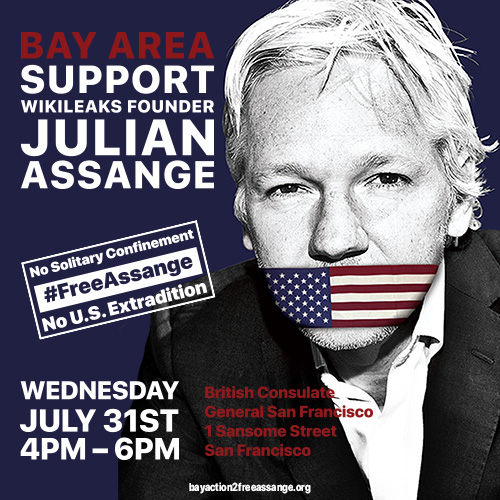 Please bring any signs and bull horns you have.

The attack and International law-breaking arrest by the British government and police on Julian Assange, with the direct support of the US-controlled Ecuadoran government and the US government itself, is an attack on ALL journalists, whistleblowers, and democracy. It is aimed at closing down all alternative media. There are multiple other examples of attempts at this happening daily. While there is no prosecution of the war criminals exposed by WikiLeaks, Assange, Chelsea Manning, and other journalists, journalists and whistleblowers are under attack and imprisoned, or even killed.

Over the years WikiLeaks has published reams of documents supplied by whistleblowers that chronicle the secret machinations of the U.S. and other governments behind the backs of its people. These included documentation of equipment expenditures and holdings in the Afghanistan war and a report informing a corruption investigation in Kenya. In April 2010, WikiLeaks released the so-called Collateral Murder footage [https://youtu.be/5rXPrfnU3G0] from the 12 July 2007 Baghdad airstrike in which Iraqi journalists were among those killed. Other releases in 2010 included the Afghan War Diary and the "Iraq War Logs". The latter allowed the mapping of 109,032 deaths in "significant" attacks by insurgents in Iraq that had been reported to Multi-National Force – Iraq, including about 15,000 that had not been previously published. In 2010, WikiLeaks also released the US State Department diplomatic "cables", classified cables that had been sent to the US State Department. In April 2011, WikiLeaks began publishing 779 secret files relating to prisoners detained in the Guantanamo Bay detention camp. WikiLeaks received much of this material from whistleblower Chelsea Manning.

“The Julian Assange case is a key case for freedom of the press. Assange has been hunted by the U.S. government and the government of the UK..." The government of Ecuador then handed him over to the UK where he resides in Belmarsh Prison, the Guentanemo of the UK as the U.S. Justice Department attempts to extradite him and persecute him in a kangaroo court known for unjust prosection. His “crime” is very simple - he exposed the secret machinations of the U.S. government through the whistle-blowing activities of WikiLeaks. Mainstream news organizations like the New York Times and the Washington Post have not only refused to defend Assange but instead have echoed some of the accusations against him. This is in sharp contrast to their defense of another whistleblower decades ago, Daniel Ellsberg, when they published the Pentagon Papers. ”

In standing up for the freedom of Julian Assange and of all whistleblowers, the Pacifica Foundation reiterates its commitment to the principle of freedom of the press and the right of the public to know what its governments are doing no matter who is embarrassed by the release of this information. In doing so Pacifica is following in the traditions of its founder, Lew Hill, who as a pacifist, stood up to the U.S. government during World War II.

For more event information: http://bayaction2freeassange.org
END_OF_DOCUMENT_TOKEN_TO_BE_REPLACED
Added to the calendar on Tue, Jul 9, 2019 3:59PM
Add Your Comments
Support Independent Media
We are 100% volunteer and depend on your participation to sustain our efforts!