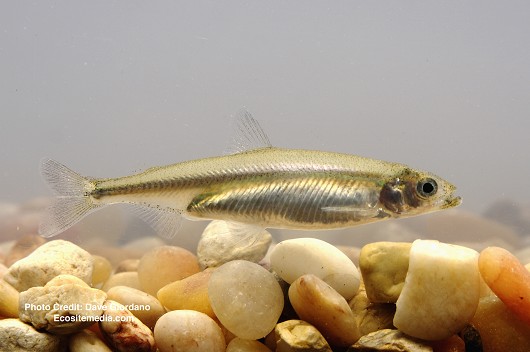 The spring 20-mm study monitors post larval-juvenile Delta Smelt distribution and relative abundance throughout their historical spring range in the Sacramento-San Joaquin Delta and San Francisco Bay Estuary, according to the CDFW.

According to independent fisheries biologist Tom Cannon in his California Fisheries Blog on the California Sportfishing Protection Alliance (CSPA) website, the Late April and early May 20-mm Surveys “provide an excellent picture of the status of Delta smelt population in the estuary.”

“The outlook for the Delta smelt population remains grim after these lows. Despite good conditions in spring 2018 and 2019, the severely depressed number of adult spawners indicates a continuing weak potential for recovery,” Cannon concluded.

UC Davis Professor Emeritus Dr. Peter Moyle and other fisheries scientists say they don’t have an easy answer for the Delta smelt’s precipitous decline, particularly in 2017, a record water year when biologists would have expected a rebound. But fish advocates and independent scientists attribute the collapse of Delta smelt and other fish on the export of big quantities of water to agribusiness and Southern California water agencies by the state and federal pumping facilities in the South Delta over the past 50 years.

“We know what fish need,” said Bill Jennings, Executive Director CSPA. “Fish prosper when they have adequate flows and quality water. They suffer when they don’t. The question is how do we get them to survive on less water of poorer quality than they evolved with for thousands of years. The answer appears to be they can’t.”

The Delta smelt, found only in the Sacramento-San Joaquin Delta, is an indicator species that demonstrates the health of the San Francisco Bay Delta, the largest estuary on the West Coast of the Americas. If the smelt goes extinct, other West Coast fish species are likely to follow.

For more information on the fall 2018 midwater trawl survey, please read my article in the Sacramento News and Review: http://www.newsreview.com/…

Delta Smelt in the Central and South Delta areas may be entrained into the pumps of the State Water Project (SWP) and the Central Valley Project (CVP). This survey gets its name from the size (20-mm) at which Delta Smelt are retained and readily identifiable at the fish facilities associated with the state and federal pumps. The 2004 Biological Opinion requires this survey to provide "recent time" (within 72 hours) information on the distribution and relative abundance of Delta Smelt throughout the Delta and the upper estuary. These data can be found under Delta Smelt Distribution and Delta Smelt Length Frequency. Based upon the data, recommendations are made to protect Delta Smelt.”

Sampling surveys range from 8-10 annually and run on a fortnightly basis covering stations throughout the Delta and downstream to the eastern portion of San Pablo Bay and Napa River. Samples are collected using an egg and larval, rigid opening net constructed of 1,600 µm mesh. Three 10-minute stepped-oblique (bottom to top) tows are made at each station.

Samples are preserved in neutral buffered formalin and then all fish larvae are sorted out and identified in a lab. The vast numbers of species (ca. 50) and amounts of detritus in the samples makes this a labor-intensive process.
§Figure 1
by Dan Bacher Sunday Jul 7th, 2019 9:41 AM 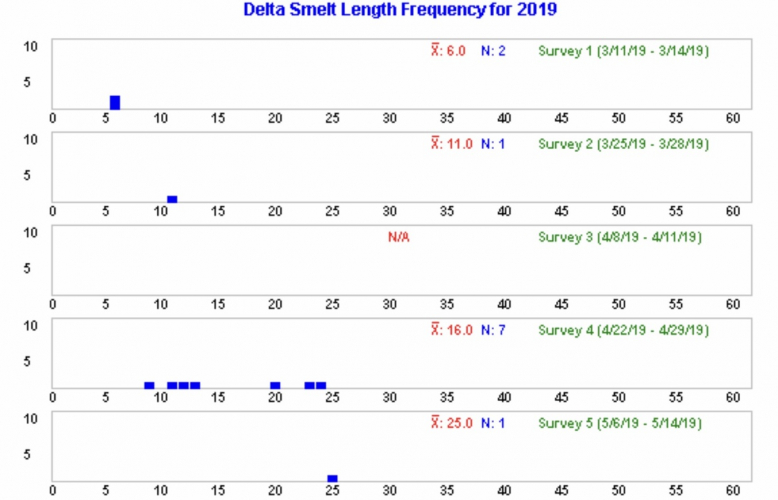 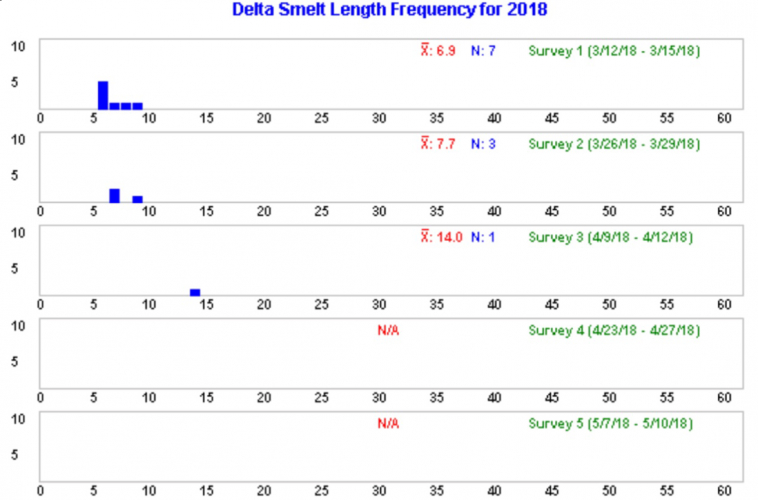 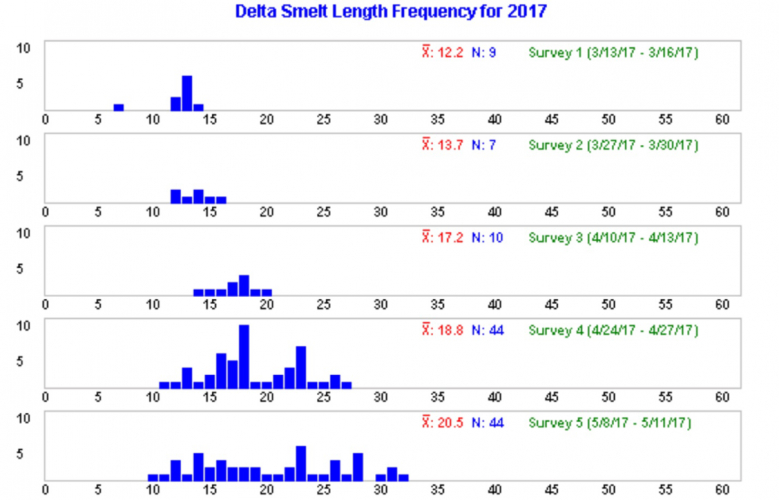 original image (1128x724)
Figure 3. Catch and lengths of Delta smelt collected in the 20-mm Survey in spring 2017.
Add Your Comments
LATEST COMMENTS ABOUT THIS ARTICLE
Listed below are the latest comments about this post.
These comments are submitted anonymously by website visitors.