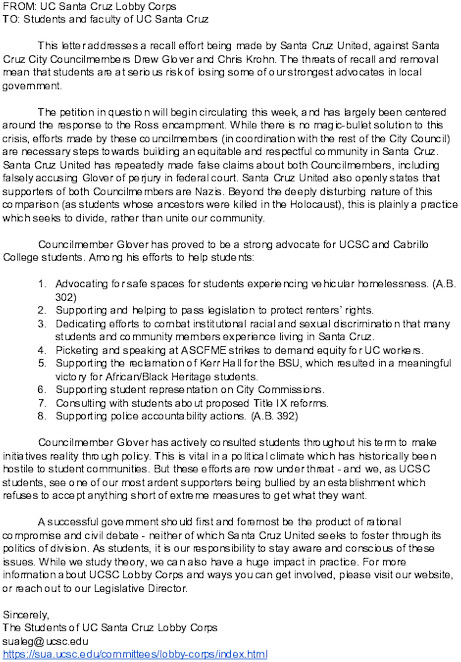 This letter addresses a recall effort being made by Santa Cruz United, against Santa Cruz City Councilmembers Drew Glover and Chris Krohn. The threats of recall and removal mean that students are at serious risk of losing some of our strongest advocates in local government.

The petition in question will begin circulating this week, and has largely been centered around the response to the Ross encampment. While there is no magic-bullet solution to this crisis, efforts made by these councilmembers (in coordination with the rest of the City Council) are necessary steps towards building an equitable and respectful community in Santa Cruz. Santa Cruz United has repeatedly made false claims about both Councilmembers, including falsely accusing Glover of perjury in federal court. Santa Cruz United also openly states that supporters of both Councilmembers are Nazis. Beyond the deeply disturbing nature of this comparison (as students whose ancestors were killed in the Holocaust), this is plainly a practice which seeks to divide, rather than unite our community.

Councilmember Glover has proved to be a strong advocate for UCSC and Cabrillo College students. Among his efforts to help students:

Councilmember Glover has actively consulted students throughout his term to make initiatives reality through policy. This is vital in a political climate which has historically been hostile to student communities. But these efforts are now under threat - and we, as UCSC students, see one of our most ardent supporters being bullied by an establishment which refuses to accept anything short of extreme measures to get what they want.

A successful government should first and foremost be the product of rational compromise and civil debate - neither of which Santa Cruz United seeks to foster through its politics of division. As students, it is our responsibility to stay aware and conscious of these issues. While we study theory, we can also have a huge impact in practice. For more information about UCSC Lobby Corps and ways you can get involved, please visit our website, or reach out to our Legislative Director.


According to the UC Santa Cruz Student Union Website, the Lobby Corps is a committee of the SUA, "charged with formulating and organizing an advocacy strategy on behalf of students. Lobby Corps visits with the Santa Cruz City Council, California Legislature in Sacramento, and Washington D.C. to lobby legislators on pressing issues for the welfare of UCSC students."
Add Your Comments
Support Independent Media