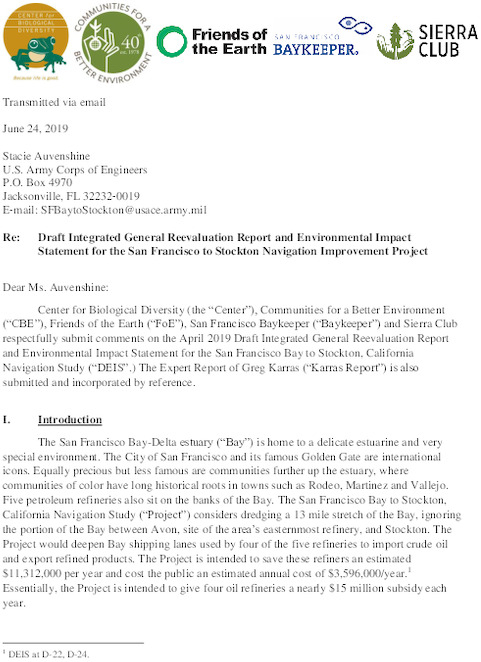 The Army Corps’ proposal would result in a 13-mile dredging project designed to make it easier for oil tankers to move greater amounts of crude to and from Bay Area refineries. Dredging scrapes layers off the bay floor to make a deeper path for ships, allowing them to load up with more oil while navigating through the bay.

The dredging would coincide with the refineries’ plans to process more Canadian tar sands crude via ship over the coming years. Canada has taken another step toward completing the massive Trans Mountain Pipeline expansion, which would significantly increase the volume of dirty tar sands coming to West Coast refineries. The dredging project may also allow the port of Stockton to export more coal to Asia.

“The Trump administration is proposing what amounts to almost $15 million in subsidies each year for four refineries to increase production,” said Zolboo Namkhaidorj, youth organizer at Communities for a Better Environment. “The communities of color beside the refineries will be breathing even more dangerous pollution, when we need to be transitioning off fossil fuels and into healthier communities.”

“The Corps has failed to fully disclose the project’s impacts,” said Erica Maharg, managing attorney for San Francisco Baykeeper. “This dredging project will increase refinery production, potentially open up more exports of dirty coal through the bay and harm imperiled fish species. The Corps must do more to mitigate these harms.”

According to expert analysis, the dredging project could release up to 7.2 million additional tons of carbon dioxide equivalent into the atmosphere, along with significant increases in local air pollution. The proposed project may also make oil spills more likely and more severe. In 2016 a spill from an oil tanker docked at the Phillips 66 refinery sent 120 people to the hospital, and the Air District issued a shelter-in-place order for 120,000 residents in Vallejo.

“The Trump administration is pushing this project to allow Big Oil to bring more dirty, climate-destroying tar sands oil and other crude to California,” said Marcie Keever, legal director for Friends of the Earth. “This action puts our region and communities at an unacceptable risk of more pollution and oil spills and the Army Corps’ actions should be halted immediately.”

“This proposed project is just another attempt by the Trump administration to make it easier for the fossil fuel industry to profit at the expense of our health and safety,” said Terilyn Chen, Sierra Club’s regional coal organizer. “Our communities do not want to see more dirty tar sands traveling through our water, and we will continue to fight back against this dangerous proposal.”

The project could also be detrimental to numerous imperiled fish species that inhabit San Francisco Bay. Whales and other marine mammals could see greater risks from ship strikes and be harmed by increased noise levels.

“This project is a boondoggle meant to line the pockets of big oil companies,” said Hollin Kretzmann, a senior attorney at the Center for Biological Diversity. “But the harms from spills, accidents and climate chaos will fall on the public and the marine species that live in the bay’s unique ecosystem.”


Communities for a Better Environment is a California nonprofit environmental health and justice organization with offices in the San Francisco Bay and Los Angeles areas. CBE has thousands of members throughout the state of California. More than 2,700 of CBE’s members live, work, or engage with environmental justice issues in urban communities in Northern and Southern California.

Friends of the Earth fights to protect our environment and create a healthy and just world. We speak truth to power and expose those who endanger people and the planet. Our campaigns work to hold politicians and corporations accountable, transform our economic systems, protect our forests and oceans, and revolutionize our food & agriculture systems.

The Sierra Club is a national nonprofit organization of approximately 786,643 members dedicated to exploring, enjoying, and protecting the wild places of the earth; to practicing and promoting the responsible use of the earth’s ecosystems and resources; to educating and enlisting humanity to protect and restore the quality of the natural and human environment; and to using all lawful means to carry out these objectives.

The Center for Biological Diversity is a national, nonprofit conservation organization with more than 1.4 million members and online activists dedicated to the protection of endangered species and wild places.