Add an Event
Newswire
Calendar
Features
Home
Donate
From the Open-Publishing Calendar
From the Open-Publishing Newswire
Indybay Feature
Publish to Newswire
Add an Event
Related Categories: Santa Cruz Indymedia | Government & Elections | Health, Housing & Public Services | Police State & Prisons
Is New City Manager Tina Friend Bringing an Anti-Homeless Agenda to Scotts Valley?
by Santa Cruz News Network
Sunday Jun 23rd, 2019 5:39 PM
Without public input, freshly hired City Manager Tina Friend has drafted the City of Scotts Valley's political position on Assembly Bill 516, a state bill which would amend the California vehicle code to extend the amount of time before local authorities may legally tow a vehicle parked in public, and would also prevent the sale of vehicles after they are impounded to cover towing expenses. The bill is seen as a much needed protection for low income residents in the state; having a vehicle towed can devastate lives, including those of struggling families and homeless people who live in their vehicles. Tina Friend has been on the job for just over a month, quitting her position as assistant City Manager for the City of Santa Cruz for the new role. Her quick opposition to AB 516, and the unilateral action she made in the name of the City, raises the question: Is Tina Friend bringing an anti-homeless bias to Scotts Valley that she cultivated while working for the City of Santa Cruz? Photo: Tina Friend authorizing a parks ranger to remove a homeless person's possessions from Santa Cruz City Hall in 2017 (credit: Keith McHenry). 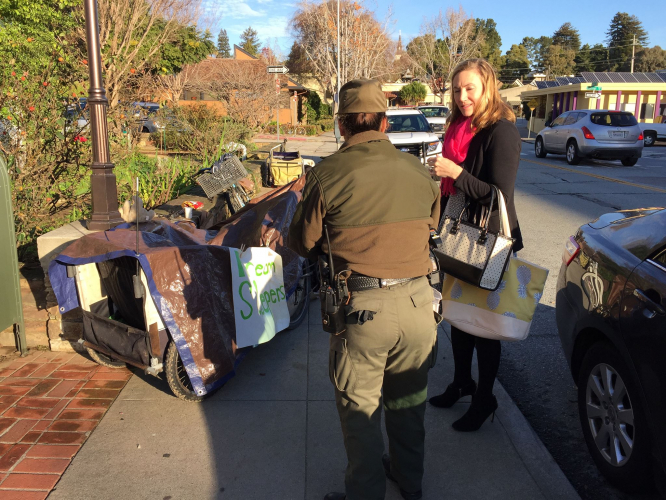 The Scotts Valley City Council has not publicly addressed AB 516, and the citizens of Scotts Valley did not have a chance to comment on, before it was issued, this policy letter Tina Friend has drafted.

Equally concerning, in terms of transparency, is the fact that the only place this policy letter has been published is on Joe Netro's Santa Cruz CA: Keepin' It Real hate blog, which regularly targets low income residents, and is often a source of misinformation and outright lies in the community.

"Their council meeting calendar doesn’t allow for them to meet soon enough to direct a letter in opposition to AB 516 (aka” Homeless RV ordinance) in a timely manner (their next meeting is scheduled for August 7, 2019). The Mayor, for logistical reasons, is not able to schedule a special meeting. CA Meeting laws (aka: The Brown Act) allow for a body to hold a special meeting. Special meetings differ from regular meetings in that they only require 24 hours advance notice, may be held with only a quorum of the commission present, and can be held anywhere within its jurisdiction. As a work around, the City Manager has submitted a letter to all committee members overseeing this Bill as it passes through the Capitol. They've also contacted Bill Monning's Office."

Keith McHenry, the co-founder of Food Not Bombs, took the above photo of Tina Friend in January of 2017 during the Freedom Sleepers protests at Santa Cruz City Hall in support of homeless people and to repeal the local sleeping ban. When he posted it in 2017, McHenry wrote that Tina Friend, who used the name Tina Shull when she was assistant City Manager of the City of Santa Cruz, was a "leader of the anti-homeless campaign," and that she, "tries to get the rangers to kick out those sleeping outside City Hall."

McHenry also wrote that Friend was one of the individuals "behind the laws against the homeless" in the city at the time.

AB 516 is in committee process in the State Senate. As it is presently written, the bill states:

"This bill would delete the authority of a peace officer or public employee, as appropriate, to remove or immobilize a vehicle under those circumstances. The bill would also modify the authority to remove a vehicle parked or left standing for 72 or more consecutive hours in violation of a local ordinance by requiring the vehicle to remain parked or left standing for 10 or more business days after a notice is affixed to the vehicle specifying the date and time after which the vehicle may be removed. The bill would repeal the related authority to conduct a lien sale to cover towing and storage expenses." 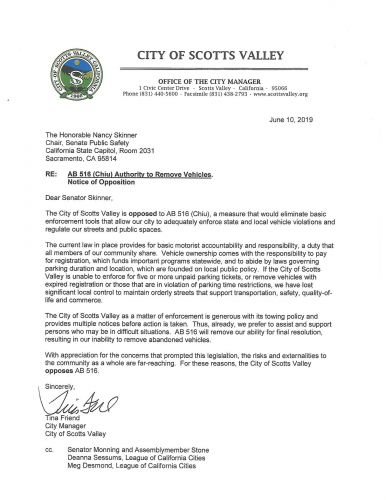 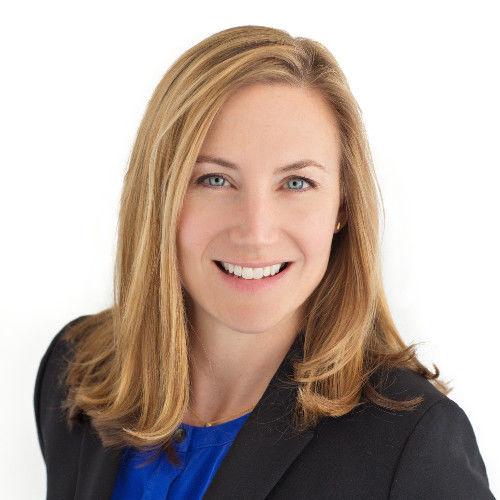