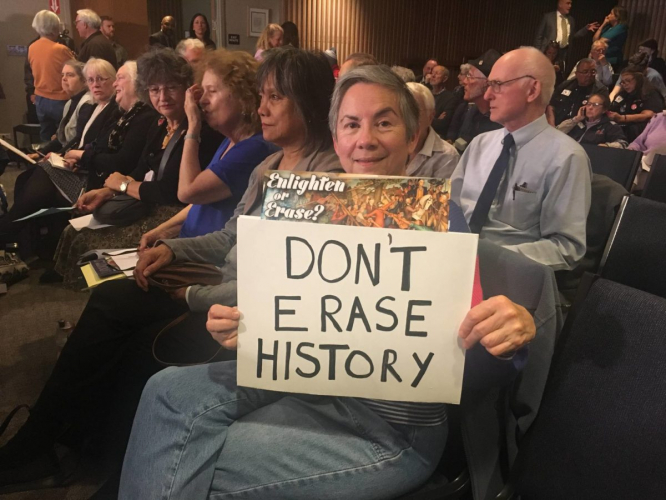 San Francisco school officials are expected to decide whether to destroy or obscure the historic mural at George Washington High School.

On Wednesday night, I received an email that so chilled me I could not sleep. In my restlessness, I imagined our city stripped bare of the creativity that has been so potent a source of its identity and its fame.

In one vision, its pale walls were brightened only by a bilious light. In another, color and imagery were allowed, but only by permission of official bodies. Art, that transcendent realization of the parts of ourselves for which we have no name, would have no place in such a setting.

To lie idly, knowing our home might be headed for such intentional impoverishment, whether out of ignorance or malice, weighed heavily on me throughout the night.

That evening, the San Francisco Board of Education considered a recommendation to censor an 83-year-old fresco on the walls of George Washington High School. As reported in The Chronicle in several stories, the mural by Victor Arnautoff depicts chapters in the life of our first president, and includes scathing images critical of Washington’s “ownership” of enslaved workers and his pursuit of western expansion at the cost of Native American lives.

These are the images that some would like to see suppressed. The work is permanently part of the wall and could only be moved at enormous expense. Instead, suggested remedies range from covering part or all of the mural to destroying the entire thing.


The mural depicts chapters in the life of George Washington.

The email was from Chronicle reader Annette Melville, who was at the meeting. Born, raised and a current resident and voter in the city, she was the art librarian at the Library of Congress from 1976 to 1985, before heading the National Film Preservation Foundation for 17 years.

Melville is a passionate advocate of keeping the mural in place and relying on it as a teaching tool. She is also a credible observer, as confirmed by the official recording of the meeting. Her report, in brief, was that more than 25 speakers in favor of keeping the mural, including people who identified themselves as Native American and others of color, made presentations full of facts and anecdotes.

The case for removal was more passionate, citing the trauma that some experience in seeing depictions of their ancestors enslaved and murdered. These are real and deeply held feelings, I have no doubt, and they must be respected. I respect them.

The question before the board, however, is what to do about the work. Those who love great art must be heard, too, and not merely tolerated.

The facts don’t seem to have moved the board: The artist’s extensive record as a heroic campaigner for social justice. The work’s enormous artistic and historical value. The 1974 agreement to mitigate even latent prejudice by commissioning a mural tribute by Dewey Crumpler, an African American artist, to the accomplishments of people of color.

None of this outweighs appeals to the emotions, and I get it. So here is my heartfelt cry.

Art is not a luxury, an add-on to some more important part of life. Using the term in its broad definition to mean all human expression, it is the reason for life. I can attest that art saved at least one kid growing up in the projects of a poor Eastern city when, all around me, others gave up early.

What we create is an extension of ourselves and, as such, it warrants the same regard we ourselves deserve. There are, of course, many things we make that are meant to be consumed, from a well-crafted meal to a newspaper column, but the goal is the same even for a permanent work: to nourish others and ourselves. To destroy a work of art is to starve, if not to kill. Or, as Henry Louis Gates is often quoted as saying, “Censorship is to art as lynching is to justice.”

Many have asked the school board to consider the educational legacy of their decision. How does it benefit students to tell them that they can close their eyes and ears to historical facts that may cause discomfort, or even horror? What more might they learn if they were taught to debate the issues — historical, artistic, political — rather than to sweep the questions under the rug?

I suppose good teachers can find a way around the mistakes and machinations of bureaucrats and politicians to find other teaching examples. But the board members face an even more burdensome legacy question if they decide to permanently erase or deface the George Washington High School mural.


The controversial “Early Days” statue, one of five that made up the Pioneer Monument, is removed from Civic Center Plaza in September.
Photo: Jessica Christian, The Chronicle
Their action will not be in a vacuum. Like the scar in the urban fabric created by the removal of a sculpture, “Early Days,” in San Francisco’s Civic Center — a work not nearly as significant as art, but a potent reminder of our racist past — it is an ineffectual attempt to change the history by averting attention from its record. That action was undertaken by the San Francisco Arts Commission, a group that calls itself “the city agency that champions the arts.”

I dread the day when another, and then another group or individual sets out to question a work of art in the public realm, not in the spirit of criticism and learning but to permanently deny us all the opportunity to judge for ourselves. I fear a time when nothing but the commercially sponsored and the innocuously peripheral make up our visual environment.

Then we all will live in a poorer city, and the censors will know they were the cause. 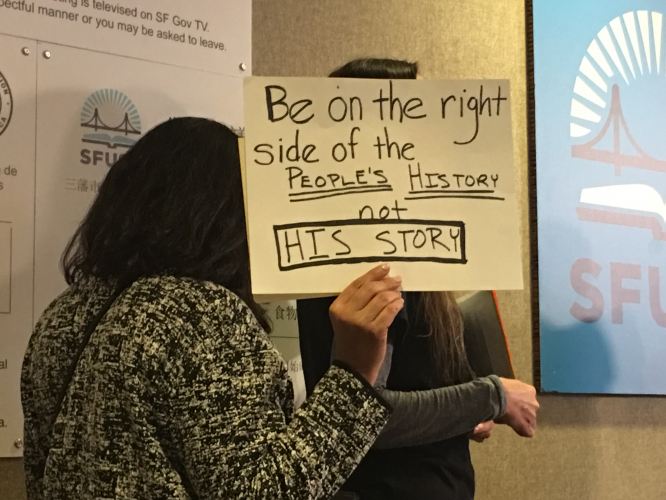 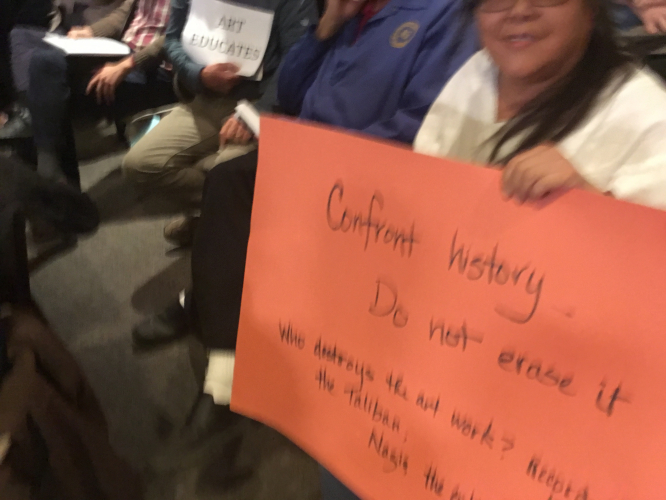 original image (4032x3024)
One George Washington High alumni opposed the destruction of the mural.
https://youtu.be/rG6x4JS76j0
Add Your Comments
§Elected School Board Swore to Uphold the Constitution
by Accountability
Friday Jun 21st, 2019 10:20 AM
Every single member of that school board swore to uphold the Constitution, including the First Amendment, which guarantees free speech. Should they vote to destroy or cover up the mural, they will be in violation of their oath of office. For violating their oath of office, they can and should be defeated in the next election.

The opponents of the mural do not say that it is false; they say it is true and that is what bothers them! Every single American should not only be traumatized, we should all be outraged at the lies we have heard about American history and be glad that this mural is used as a teachable moment for the history teachers at Washington High School.

We are witnessing the contempt for education on the part of the anti-mural forces, both on and off the school board, that is dominant in this backward country where labor is weak, and that is the heart of the problem.