“Our community knows refinery expansions are a dead end,” said Isabella Zizi, Stand.earth. “We need our public officials like the Contra Costa County supervisors to stand with us in preventing new pollution sources from harming our health, and supporting real solutions like a just transition for refinery workers and local economic development that protects air and water quality.” 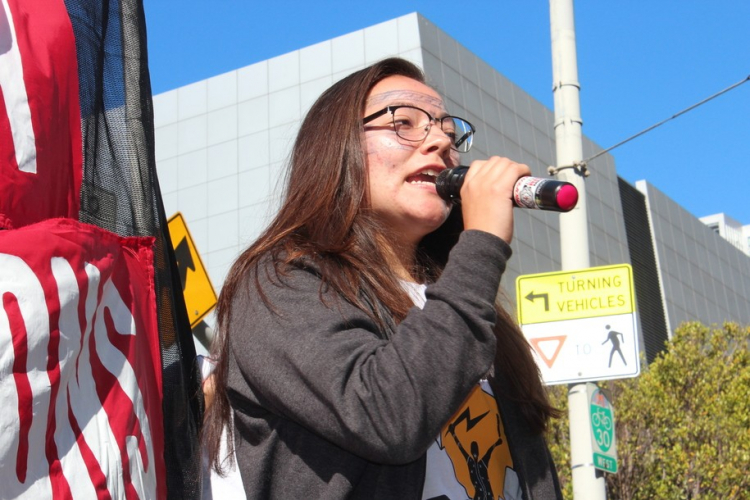 “The proposal would impact local health and the climate by increasing refinery emissions and worsening air quality for nearby communities, while also increasing tanker traffic and the risk of a devastating oil spill in San Francisco Bay,” according to a press release from the coalition.

The San Francisco Bay Delta Estuary is the largest estuary on the West Coast of the Americas — and the increased risk of an oil spill on the bay threatens many fish populations that migrate through, reside, spawn or rear in the bay, including Chinook salmon, steelhead, halibut, striped bass, rockfish, lingcod, leopard sharks, sixgill sharks, soupfin sharks, bat rays, brown smoothhound sharks, green sturgeon, white sturgeon, Pacific herring, anchovies, jack smelt, over a dozen species of surfperch and many other species.

“If the refinery’s full expansion moves ahead, more than twice as many crude oil tankers could travel to the refinery, some of them carrying tar sands from Canada, which is extremely difficult to clean up. This could add up to as much as a tenfold increase in the amount of tar sands processed in Bay Area refineries,” the group said.

The coalition said the Canadian federal government is expected to announce next week whether it will approve the new Trans Mountain Pipeline that would likely supply the tar sands to Phillips 66’s San Francisco Refinery.

“Economists have questioned Canadian Prime Minister Justin Trudeau’s claims that the pipeline would help Canada reach new markets in Asia, instead of simply expanding into existing U.S. markets in California and Washington,” the group stated.

Over the last five years, two thirds of tankers loaded with crude oil from the existing Trans Mountain Pipeline went to California, according to a 2018 Greenpeace report. Read more: Why Californians are worried about the Trans Mountain pipeline (The Narwhal, October 2018)

The coalition launched an extensive website at http://www.protectthebay.org with factsheets, presentations, and more on the refinery proposal. The coalition asks local community members to get involved to help illustrate the community’s growing opposition to the refinery expansion proposal by:

Sharing your opposition to the Phillips 66 refinery expansion proposal and the increase in oil tankers in San Francisco Bay on social media using the hashtag #TarSandsFreeSFBay.

Representatives of the groups in the coalition commented on the launch of the new group.

“Our community knows refinery expansions are a dead end,” said Isabella Zizi, Stand.earth. “We need our public officials like the Contra Costa County supervisors to stand with us in preventing new pollution sources from harming our health, and supporting real solutions like a just transition for refinery workers and local economic development that protects air and water quality.”

“Phillips 66’s reckless plans to increase tanker deliveries to its wharf and refine tar sands at its Rodeo refinery are opposed by tens of thousands of Bay Area residents,” said Shoshana Wechsler, Sunflower Alliance. “These plans endanger our neighbors living near that refinery and the entire San Francisco Bay, and they worsen an already severe climate crisis. People power stopped an oil terminal in Pittsburg, and oil train projects in Benicia and San Luis Obispo. We won’t rest until Phillips 66’s tar sands proposals are dead in the water.”

“The refinery’s latest plan to expand dilbit imports, cracking of that bitumen, and recovery of those diluent oils threatens to lock in a worst-case future for our climate, air, health, safety, and Bay,” said Greg Karras, Communities for a Better Environment. People have a right to know about this unnecessary threat.”

“The small towns of Rodeo and nearby Crockett are ‘ground zero’ for tar sands processing in the San Francisco Bay Area, but it’s not just us who will be affected. Sounds from increased tanker traffic will negatively impact the already stressed, killer whale population and hasten its long-term slide to extinction,” said Nancy Rieser, Crockett-Rodeo United Defend the Environment. “Equally important, is the plight of the indigenous communities of Alberta, Canada whose waterways and lands have been devastated by tar sands mining. It is our sincere hope that the Contra Costa County Board of Supervisors stand in solidarity with the people they are tasked to serve and do what’s right for the West Coast.”

“Rodeo Citizens and our neighbors throughout Contra Costa County have been overwhelmed with toxic chemical releases from this refinery,” said Janet Pygeorge, Rodeo Citizens Association. “The asthma rate in Contra Coast County school children is higher than surrounding areas, as is the cancer rate when compared to the national average.”

The coalition is hosting this upcoming event in the Bay Area:

July, date TBA: Toxics Tour with community members
Take a guided tour of the Bay Area’s refineries and learn about the toxic pollution that people living near the refineries experience every day. This event is open to the public, and reporters are welcome to attend. Contact info [at] protectthebay.org with questions or to RSVP.

Most Californians, including many environmentalists, are unaware of how effectively Big Oil and the Western States Petroleum Association (WSPA) have captured California regulators, in spite of the state’s “green” image.

A review of state permitting records in last year’s report “The Sky’s The Limit: California,” shows that more than 21,000 oil and gas well drilling permits were issued during the Jerry Brown administration. These wells include 238 new offshore wells approved between 2012 and 2016, according to Department of Conservation data analyzed by the Fractracker Alliance: http://www.fractracker.org/…

The Western States Petroleum Association (WSPA) is not a household name in California, but it should be. It’s the trade association for the oil industry and the largest and most powerful corporate lobbying organization in the state. If  you want to know the industries, organizations and people that control California, WSPA and Big Oil are right at the top of the list.

WSPA represents a who’s who of oil and pipeline companies, including AERA. BP, California Resources Corporation, Chevron, ConocoPhillips, Exxon, Plains All American Pipeline Company, Valero and many others. The companies that WSPA represents account for the bulk of petroleum exploration, production, refining, transportation and marketing in Arizona, California, Nevada, Oregon, and Washington, according to the WSPA website, http://www.wspa.org.

WSPA and Big Oil wield their power and influence over public discourse in 6 major ways: through (1) lobbying; (2) campaign spending; (3) serving on and putting shills on regulatory panels; (4) creating Astroturf groups: (5) working in collaboration with media; and (6) contributing to non profit organizations.

For a complete analysis of how Big Oil and WSPA exert their power and influence over public discourse and California regulators, read my article here: http://www.dailykos.com/...