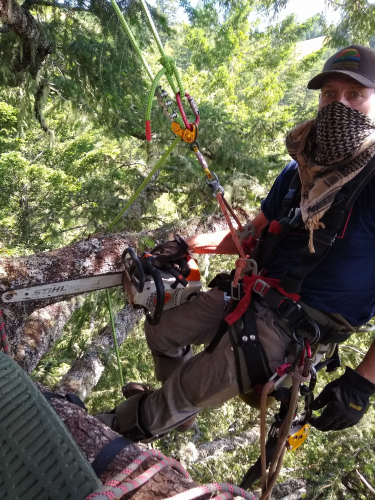 original image (1536x2048)
June 13 media release:
Scotia, CA— At 2 P.M. Thursday, June 13, a dozen protestors engaged in an office demonstration in Scotia to establish communication directly with Humboldt Redwood Co. (HRC) decision-makers, and make clear their demands, in light of the increased threat from HRC to protesters opposing logging in the forest on Rainbow Ridge.

They entered the Humboldt Redwood Company offices, requesting to speak to John Andersen (director of Forest Policy at HRC) about the safety and treatment of tree-sitter Rook. They were given Andersen’s cell phone number by the receptionist. The protestors then marched through the entire two floors of the facility with drums and chants, demanding that HRC’s hired security “Leave Rook alone! Protect Rainbow Ridge!” While in the office, they took time to inspect the maps posted in the HRC offices.

This demonstration was in direct response to HRC’s attempt to drive out Rook the tree sitter by dispatching a masked climber Thursday morning, who scaled Rook’s tree and cut down vital food and water supplies, while physically threatening the tree sitter’s safety, as supplies hurtled toward the ground from above Rook’s head. Guards at the base of the tree shouted violent threats into the forest in attempts to deter possible resupply efforts from other forest defenders.

Rook commented on the situation and increased threats from guards and climbers. “Whatever their intentions, the men who guard this tree, who hunt us in the woods, who escort the loggers to work each morning, are doing their part to create the future their descendants will inherit — one of famine, climate
migration and global poverty. They are enabling the ecological collapse. They are making me watch the destruction of a place I love.”

Rook’s report from the tree told the story of telling the climber that he was a safety threat, as the climber sawed branches and cut ropes, Rook informing him that he would have to climb over them, which he did, several times. Rook said the climber cut a folding saw off Rook’s harness, and used a chainsaw to cut large branches around the sit, nearly cutting the net that is the living space, with Rook on it. Other gear was destroyed. The climber cut two 6-gallon jugs of water from above Rook’s head, coming close to hitting them if the jugs had not bounced off a branch. By the time the climber descended, Rook’s food and most of their water supply was gone, along with most of the gear brought up the tree. There was one rope left to descend. Rook remains in the tree as of this writing.
https://www.facebook.com/savethemattolefor...
§Photo: masked Lear Security climber in Rook's tree to confiscate supplies.
by kp Saturday Jun 15th, 2019 8:34 PM 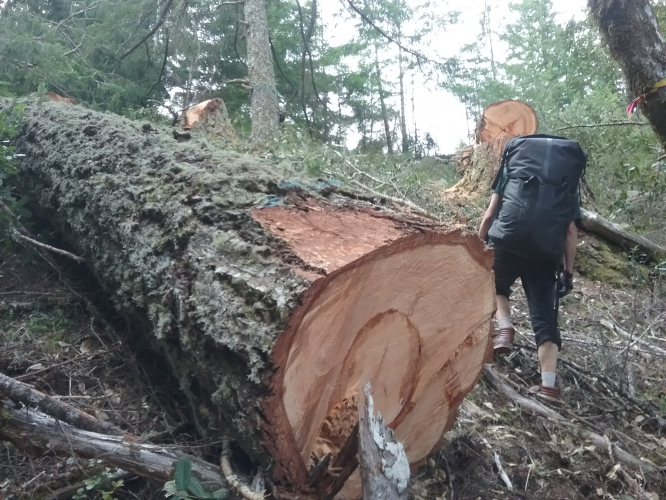 original image (2592x1944)
https://www.facebook.com/savethemattolefor...
Add Your Comments
Support Independent Media
We are 100% volunteer and depend on your participation to sustain our efforts!