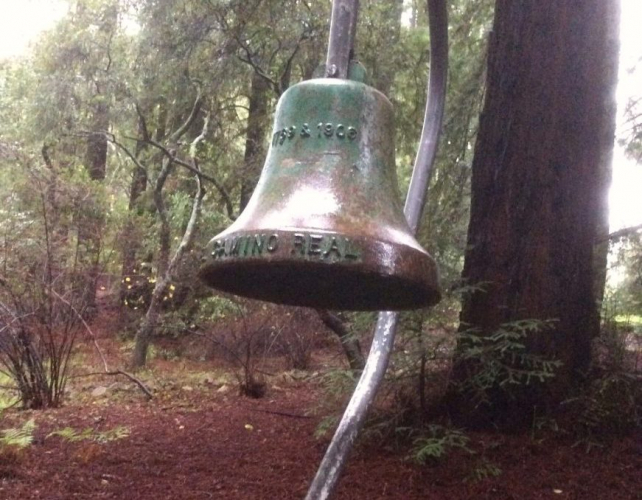 The bell marker, which memorializes the California Missions and an imagined route of travel that once connected them, is viewed by the Amah Mutsun and many other California indigenous people as a racist symbol that glorifies the domination and dehumanization of their ancestors. It is being removed at the request of the Amah Mutsun, with support from UCSC faculty members, students, and administrators.

The El Camino Real bell at UCSC campus is one of hundreds of the cast-iron markers on public display throughout California. “These bells are deeply painful symbols that celebrate the destruction, domination and erasure of our people,” explains Valentin Lopez, Chair of the Amah Mutsun Tribal Band. “They are constant reminders that our people, and our history, continue to be disregarded to this day.”

“The true history of the California mission system has never been told,” states Lopez. “It is shameful that these places where our ancestors were enslaved, whipped, raped, tortured and exposed to fatal diseases have been whitewashed and converted into tourist attractions.”

Lopez and other Amah Mutsun tribal members draw a parallel between the movement to topple Confederate statues and their own reckoning with mission bell markers. In both cases, what are presented as benign historical markers are in fact deeply political symbols which shape public perception, enshrining distorted visions of the past and obscuring historic crimes.

Two acceptable options have been identified by the Amah Mutsun for disposal of the bell— it can either` be placed in a museum setting and properly contextualized with an explanation of its removal from the public sphere, or, it can be melted down and “recycled for peaceful purposes.”

The Amah Mutsun hope that the unearthing of this El Camino Real Bell—the first such official removal, to the best of their knowledge—will be “the first domino,” launching a series of removals that will result in the elimination of all Mission Bell markers from public display.

Press and members of the public invited to witness the bell removal. Gather on the north side of the Hahn Student Services building on the UC Santa Cruz campus at 9:30am. One-day “A” permits, for parking, can be purchased at the kiosk at the main entrance to campus.

For the Indians who toiled in California’s mission compounds the ringing of the bell regimented an iron-clad schedule of forced prayer and compulsory labor. The bell was a potent symbol of the domination of the Catholic Church and the Spanish state over all aspects of the lives of the indigenous people who were forced to live “under the bell.”

In the early 20th century, a consortium of developers, automobile promoters and civic boosters seeking to expand tourism and settlement in California began promoting a romantic and fanciful vision of a “golden age” of the region’s Hispanic past. The symbol of a mission bell on a shepherd’s staff was chosen to mark the route of a new state highway following the mythical path of the so-called “Royal Road,” or El Camino Real, linking the 21 missions of California, which were fashioned into profit-making tourist destinations. 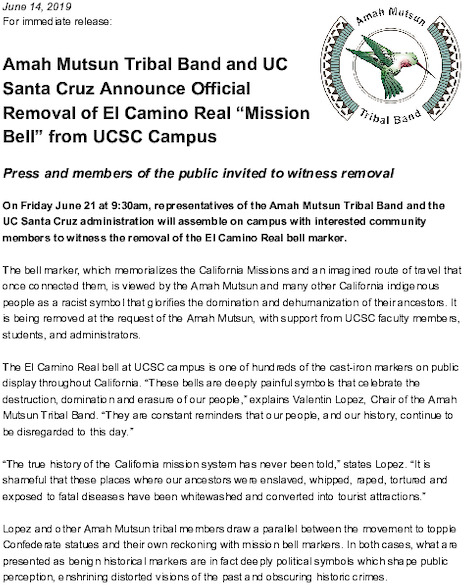