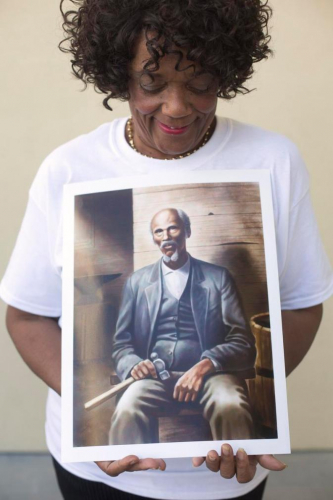 Both free and enslaved Pan Africans are “hidden figures” in California History. Beginning in 1846, a focused "Manifest Destiny" transition from Alta California in the Mexican Republic, to the 31st state of the United States was complete in 1848.

California Pioneers of African ancestry played very significant roles before, during and after the California Gold Rush on the journey to participating in a very bloody U.S. Civil War in our unique journey toward Juneteenth, June 19, 1865.

Dr. Patricia Isabell Adelekan will be one of our featured speakers as we share “Voices to Be Heard, Honoring our Ancestors” 11:30 am, Wednesday, June 19, 2019 beginning on the West Steps of the California State Capitol and ending in the cool shade of the State Capitol Civil War Memorial Grove.

Dr. Patricia Adelekan’s great-great-great-grandfather, Charles Diuguid served in the United States Colored Troops in Virginia and participated during some of the bloodiest battles on American soil. Trooper Charles Diuguid was serving as a blacksmith at Appomattox, Va., on April 9, 1865, when Confederate General Robert E. Lee surrendered to Lt. General Ulysses S. Grant of the Union Army, beginning the end of the US Civil War.

President Abraham Lincoln’s Executive Order, January 1, 1863, the Emancipation Proclamation authorized US Colored Troops to fight for our freedom, and on June 19, 1865, over 1,500 US Colored Troops were stationed at the ready on Galveston Island, Texas when General Gordon Granger gave the orders to begin a campaign to secure cotton plantations throughout Texas, while freeing enslaved Africans who remained hard at forced labor during the US Civil War.

Our 154th Juneteenth Celebration of Freedom brings to life "Voices to be Heard" that honor our elders and ancestors sacrifice during this special 400 year of return, back to Africa.

April 2015, Dr. Adelekan joined about 50 other Diuguid descendants from 14 states for a family reunion at the Appomattox Court House National Historic Park, Virginia. "Growing up, you don’t understand everything that’s explained about your family’s history, but I was told that he was very special,” said Dr. Adelekan, a retired educator, “his work ethic and giving back influenced our family’s values.”

Today, Dr. Adelekan leads Youth on a Move, Inc., the International Educator’s Hall of Fame and has joined our effort to expand understanding of the significance of the National Underground Railroad Network to Freedom, to our California story.

Everyone is invited to experience our beginning effort to feature our "Voices to be Heard” during our 2019 California State Capitol Juneteenth Celebration.
Added to the calendar on Wed, Jun 12, 2019 6:07PM
Add Your Comments
Support Independent Media
We are 100% volunteer and depend on your participation to sustain our efforts!