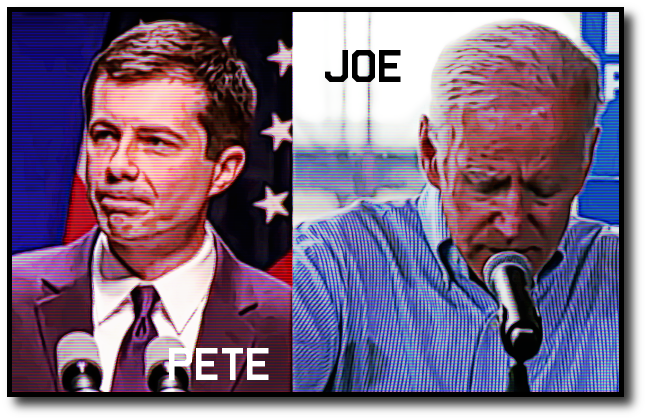 As the Trump administration intensifies the conflict with China and rearms the US military in preparation for “great power” conflict, the leading Democratic candidates are lining up to demonstrate their commitment to America’s “wars of the future.”

The two right-wing Democrats spoke bluntly about a potential US war with China, safe in the knowledge that the US media would bury their war-mongering threats beneath the inane campaign sound bites by means of which it transforms politics into a series of personal insults and platitudes.

“Our military capabilities exist for a reason… we stand ready to use force,” Buttigieg declared, adding that the US must prepare for the “wars of the future.”

Calling China a “threat,” Biden, speaking in Davenport, Iowa, said, “We are in a competition with China. We need to get tough with China. They are a serious challenge to us.” The former vice president criticized Trump for alienating US allies and said as president he would “build a united front of allies to challenge” China, adding, “We need to rally more than half the world’s economy to hold China to account.”

Last month, Biden was attacked by sections of the US national security establishment and the second-ranked Democratic candidate, Bernie Sanders, when he criticized Trump’s single-minded focus on confronting China. “China is going to eat our lunch? Come on, man,” he said. “I mean, you know, they’re not bad folks, folks… they’re not competition for us.”

At the time, national security analyst Gordon Chang condemned Biden’s remarks, declaring them “inexplicable, absolutely incorrect.” Sanders seized on Biden’s statement to present the former vice president as insufficiently committed to winning the trade conflict with China. “It’s wrong to pretend that China isn’t one of our major economic competitors,” Sanders tweeted. “When we are in the White House we will win that competition by fixing our trade policies.”

Biden’s declaration Tuesday that China is a “threat” to the United States is just the latest manifestation of the emerging bipartisan consensus within the American political establishment that the United States must intensify all aspects of the economic, technological and military confrontation with the nuclear-armed country of 1.3 billion people.

It confirms the statements of Steve Bannon, the far-right ideologue credited with masterminding Trump’s 2016 victory, that a Democratic president would be just as aggressive against China as Trump. “The China relationship is going to be the central theme of this election of 2020,” Bannon told the South China Morning Post last month. “The person who wins the election, be it a Democrat or not, will be as big or a bigger hawk than Donald Trump… The Democrats are just as hard on this as the Republicans.”

As Robert Daly of the Kissinger Institute on China told the newspaper, “There is a bipartisan consensus that China is America’s greatest long-term strategic challenge.”

But an even more unvarnished—and more chilling—statement about the implications of the US-China conflict came from Buttigieg, the former naval intelligence officer and current small city mayor who has inexplicably skyrocketed in the opinion polls to the top ranks of Democratic candidates.

Speaking Tuesday at Indiana University, Buttigieg said the United States has set its “defense spending priorities based on the wars of the past rather than the wars of the future,” making clear that, were he elected president, he would make sure that the US was prepared to fight these future wars.

America, he said, must “refocus on future threats,” adding, “Our military capabilities exist for a reason… we stand ready to use force.”

He implied that Trump was insufficiently aggressive toward North Korea, declaring that “you will not see me exchanging love letters on White House letterhead with a brutal dictator.” To underscore the point, he said, “Sanctions must remain in place.”

Turning to China, he said, “Meeting the challenge of China means maintaining investments in the military.”

The most chilling part of his foreign policy speech was his statement that a common external enemy would serve as the basis for “national unity” and the “battle” at home. “The new China challenge provides us with an opportunity to come together across the political divide,” he said. “At least half the battle is at home.”

He called for “revitalizing” America’s intelligence services so they can engage in “spreading the right kinds of information,” and stressed the need to “disseminate truth” by “bridging private and public sectors.”

This is the language of war and dictatorship. It makes clear that the danger to the working class comes not just from Trump, but from the political and economic system that spawned him and all of the system’s representatives.

American capitalism, having engaged in over a quarter century of wars all over the world, is making preparations for a massive “great power” conflict with China, to be accompanied by an increasingly open turn to dictatorship and censorship at home.

The Democrats argue merely that they would take a “smarter” and more “strategic” approach to this conflict than Trump, who, according to Buttigieg, thinks “all that matters is the import export balance on dishwashers.”

The inevitable and inescapable conclusion is that no struggle against Trump is possible on the basis of any connection to the Democratic Party, from the intelligence officer Buttigieg to the old war-monger Biden to the economic nationalist Sanders.

§Planning and Doing of Aggressive War is the Supreme International Crime.
by Robert H Jackson
Tuesday Aug 13th, 2019 12:01 AM
At the Nuremberg Trials the chairman, Robert H Jackson, chairman of the trials, made world law during the trials to condemn Aggressive War. Here is what he says....."War is essentially an Evil thing.....to initiate a war of aggression, therefore, is not only an international crime; It is the Supreme International Crime differing only from other war crimes in that it contains within itself the accumulated Evil of the whole". He further says that aggressive war is the supreme international crime whether Germany does it or the U.S.A. does it. That's is world law. Voila!
Add a Comment
Support Independent Media
We are 100% volunteer and depend on your participation to sustain our efforts!