by kp
Logging Crews and Security Showed up in a Contested Logging plan in the Mattole Forest, Ready to Cut in Legacy Forest and Threatened Habitat 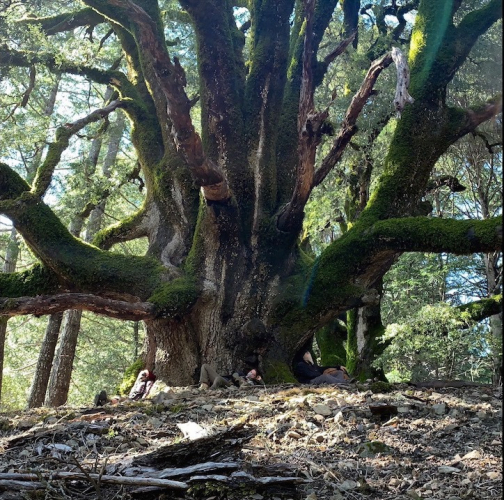 On Thursday morning, Mattole Forest Defenders headed to the forest. HRC has again hired paramilitary-styled security company Lear Asset Management of Ukiah, which employs tasers, dogs, drones, and night-vision goggles. This equipment is familiar to Lear personnel who are veterans of U.S. wars in the Middle East. Last year, there were safety breeches by Lear employees using aggressive tactics. Thursday morning they showed up in camo gear on 4-wheelers.

Rainbow Ridge, located about 25 miles south of Eureka in the Mattole River Watershed, has been the scene of resistance to old-growth logging since 1990. Lawsuits, blockades, and tree-sits have kept much of the forest standing.

The remote area is the home to numerous threatened and endangered species, including Golden Eagle, Northern Goshawk, and Northern Spotted Owl and is the headwaters for the wild Mattole River stocks of coho and Chinook salmon.

In 2018, the Lost Coast League (LCL) filed formal complaints challenging HRC’s “green” sustainability certification under the Forest Stewardship Council (FSC). FSC’s auditors (SCS Global Services) found the complaint to have merit in two areas: lack of a plan to designate and protect High Conservation Value Forests, and lack of a plan to phase out the widespread use of herbicides routinely used by HRC.

The Petrolia-based LCL was assured by SCS Global’s founder, Dr. Robert Hrubes, that logging would not happen until HRC completed its reports as required by SCS Global and delivered them to LCL for evaluation. Neither documents have been delivered to the Lost Coast League.

Despite negotiations between HRC and Mattole citizens groups (Lost Coast League, Mattole Restoration Council, Mattole Salmon Group) and other environmental organizations on the North Coast, as well as persistent forest defense actions, HRC has refused to allow the groups to achieve permanent protection for these Mattole watershed land, which lie adjacent to Humboldt Redwoods State Park, home to the largest contiguous stands of virgin Coast redwood in the world and habitat for many endangered species.

“We are shocked and disappointed that Humboldt Redwood Company would rush in to log these trees without fulfilling the promise of their Forest Stewardship Council ‘sustainability’ audit,” said Michael Evenson, Vice President of LCL. “Violating the terms of the audit should call into question the certification of their operations. This is an irreplaceable natural treasure.”

This logging also shines a light on programs of corporations like Home Depot’s that charge a premium price for lumber certified as sustainably sourced. “Claiming lumber from such sources to be sustainable,” said long-time Mattole activist Jane Lapiner, “is cheating the consumer.”

“Humboldt Redwood Co. is wholly owned by the Fisher family, San Francisco real estate moguls that also own the GAP and Old Navy. Though the Fishers claim to have serious environmental principles they have apparently have given the go-ahead on this logging.”

Tree-sitters and forest defenders have pledged to stop the logging until HRC comes to its senses and negotiates the protection of these natural treasures.
END_OF_DOCUMENT_TOKEN_TO_BE_REPLACED
Related Categories: North Coast | Environment & Forest Defense | Police State & Prisons
§
by kp 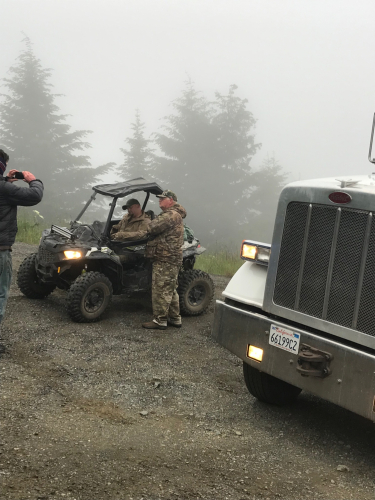 original image (1537x2049)
Photo 1: Ancient Canyon Live Oak in the Rainbow Ranch Timber Harvest Plan 1-19-00029. While this outstanding tree may be spared, Humboldt Redwood Company is planning to convert this forest into a dense tree plantation, which they claim is some kind of 'restoration'.
photo 2: Lear Security on site Thursday morning
END_OF_DOCUMENT_TOKEN_TO_BE_REPLACED
Add Your Comments
Support Independent Media
We are 100% volunteer and depend on your participation to sustain our efforts!