Add an Event
Newswire
Calendar
Features
Home
Donate
From the Open-Publishing Calendar
From the Open-Publishing Newswire
Indybay Feature
Publish to Newswire
Add an Event
Related Categories: Santa Cruz Indymedia | Health, Housing & Public Services | Police State & Prisons
Family Member Believes Man who Died in Police Custody was Denied Proper Medical Care
by Santa Cruz Police News
Wednesday Jun 5th, 2019 4:32 PM
On June 1, 40-year-old Kevin Allen died while in custody of the Santa Cruz Police. A SCPD press release states officers were responding to a report that a man had fallen to the ground near Water Street and River Street in Santa Cruz when they found and took Kevin Allen into custody and transported him to jail, claiming he was intoxicated. Once at the jail, medical staff there determined Allen would need to be taken to the hospital, where he was pronounced dead after suffering cardiac issues on the ride over. Community members have questioned why Allen was not given medical attention immediately instead of being arrested, and if that delay by Santa Cruz Police contributed to his death. Family member Carey Allen-Patrick posted the following statement on Facebook on June 4: "This man was my brother, Kevin Allen. I believe the police failed to give him proper medical treatment because he was a known homeless alcoholic. Be careful out there people." 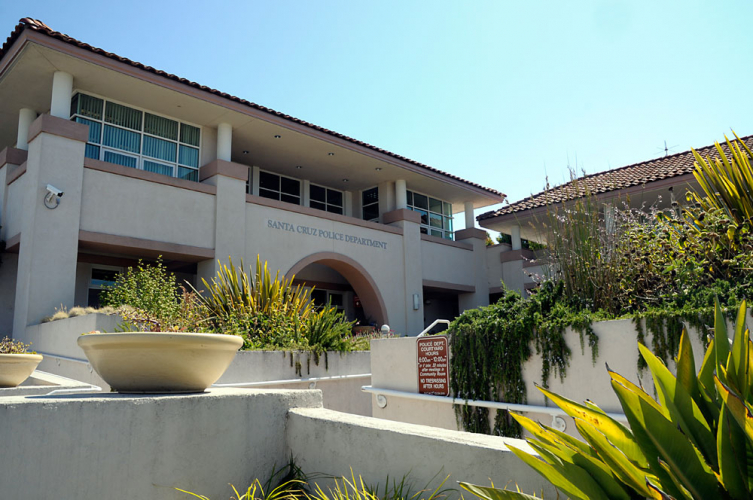 original image (1000x664)
Carey Allen-Patrick's concerns about the profiling of her homeless, alcoholic brother Kevin Allen by the authorities seem to have been confirmed by Santa Cruz Parks Ranger Jeremy Mathews, who posted on Santa Mierda, a local hate blog, that Kevin Allen was a "drunk" (see photo). Mathews, who posts on social media semi-anonymously as "Yeremey Cashews", is assigned to the ranger's division that is under the management of the Santa Cruz Police Department. These rangers are armed and tasked with enforcing laws in the urban and parkland area of downtown Santa Cruz.

The author of the Santa Mierda hate blog has posted vitriolic statements about Allen and his alleged criminal past, and has removed at least one comment critical of the police.

"The way I read it he was in distress and should have been taken to the hospital before jail," a Santa Mierda commenter wrote about Allen in a now deleted comment.

The greater community, however, has spoken out on social media in support of justice for Kevin Allen across a variety of outlets.

Here are some of the statements different individuals have made:

"He was found down to begin with he should have been taken to the hospital 1st to be evaluated. Cops are not doctors."

"They took him to jail 1st then to the ER. He was semi conscious at the jail. The medical staff sent him to the ER where he died. He should have gone to the ER 1st."

"He died on his way to the ER because they needed to book and prosecute him first to make that money."

"I met Kevin while he was in custody through my job. He had a great sense of humor. I am so sorry."

"So now the cops are trying to put this murder on someone else, vídeo cámaras and witness are not needed when they made a huge mistake. First take him to be evaluated by the doctors. Mental illness is a big problem for a lot of addicts , I heard they medicate themselves with what ever they can get. The cops need more training. Hope they can find the families so they can file a lawsuit."

"You’d think if they found someone who fell, an ambulance would be called first and foremost before jail..."

"If he was unconscious why wouldn't the call an ambulance?"

"Some times cops should be CAREFULLY if there oh k before making any arrests."

"On Saturday June 1, 2019, officers responded to a report of a forty (40) year old man who fell to the ground, in the area of River St and Water St. Members of the Santa Cruz Police Department arrived and contacted the subject. During their contact they determined the person was under the influence. Officers placed the male into physical custody and transported to county jail.

"Prior to being processed into the jail, the person became semi-conscious, and examined by jail medical staff. It was determined the subject would need to be seen at the hospital. Paramedics arrived on scene and transported him to the hospital. While being transported to the hospital, the male began to have cardiac difficulties and was pronounced dead at Dominican Hospital.

If police were called because Allen had fallen on the ground why was this health issue/crisis treated as a crime?

Why was Allen taken directly to the main jail and not to the hospital? 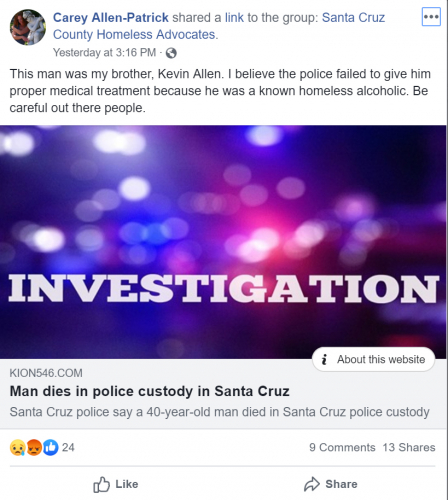 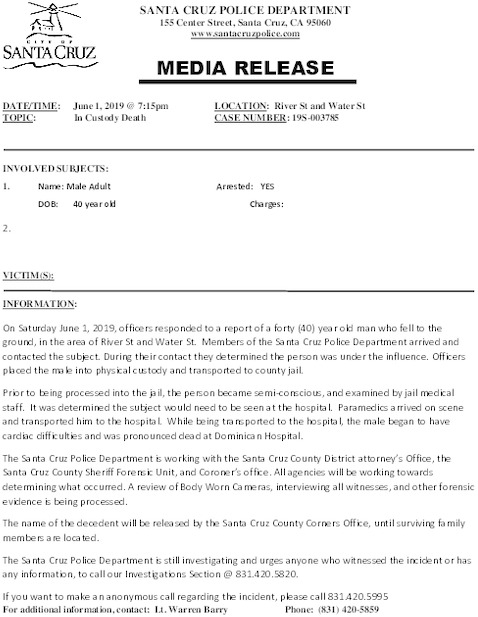 Download PDF (530.6KB)
Add Your Comments
LATEST COMMENTS ABOUT THIS ARTICLE
Listed below are the latest comments about this post.
These comments are submitted anonymously by website visitors.