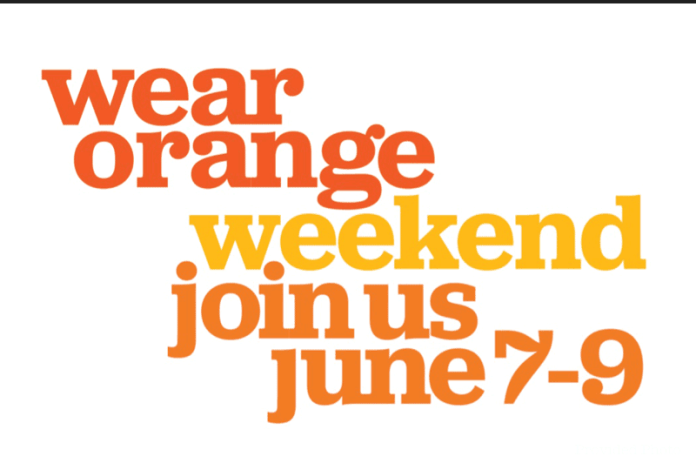 Where: Various events around the San Francisco Bay Area, State of California, and nationwide.

National Gun Violence Awareness Day is the first Friday in June, which will be June 7 in 2019.

Our movement gains momentum when gun sense activists come together to fight for a future free from gun violence. Wear Orange Weekend, June 7th - 9th, is an opportunity for us to show the country just how powerful we are.

Together, with hundreds of thousands of Americans, we turn America orange. But the work doesn’t end there. Everytown and our partner organizations continue to do life-saving work so that we can get closer to realizing a future free from gun violence. We wear orange to be seen, and demand that we be heard. Support us by going orange.

HISTORY: Orange is the color that Hadiya Pendleton’s friends wore in her honor when she was shot and killed in Chicago at the age of 15 — just one week after performing at President Obama’s 2nd inaugural parade in 2013. After her death, they asked us to stand up, speak out, and Wear Orange to raise awareness about gun violence.

For a list of supporting organizations and local governments partners, go to https://wearorange.org/supporters/
END_OF_DOCUMENT_TOKEN_TO_BE_REPLACED
Added to the calendar on Wed, Jun 5, 2019 3:56PM
Add Your Comments
Support Independent Media
We are 100% volunteer and depend on your participation to sustain our efforts!