Add an Event
Newswire
Calendar
Features
Home
Donate
From the Open-Publishing Calendar
From the Open-Publishing Newswire
Indybay Feature
Publish to Newswire
Add an Event
Related Categories: California | Racial Justice
Discover the expansion of California Juneteenth Freedom Day Celebrations
by Khubaka, Michael Harris
Saturday Jun 1st, 2019 11:11 PM
Juneteenth is our National Freedom Day. Before, during and after the US Civil War (1840-1875) California has a “hidden story” to tell that honors our California Pan African legacy and contributions by over 200,000 “unknown” US Colored Troops, "Gospel Soldiers" who gallantly fought and died for the freedoms we enjoy today. 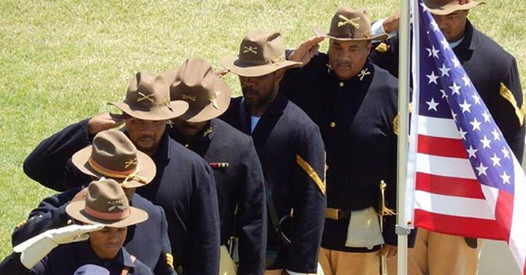 Should California Juneteenth Freedom Day Celebrations focus on our long and difficult journey toward freedom here in California?

Rapid expansion of California Juneteenth Freedom Day Celebrations should highlight the importance of US Military victories with US Colored Troops help leading the way at the end of the US Civil War. Nearly 2,000 US Colored Troops were shipped to Texas before June 19, 1865, to secure the final Confederate Port, Galveston Island, Texas Military Headquarters, to enforce freedom for enslaved Pan Africans throughout Texas, confiscate cotton crops and secure the southern border with the Republic of Mexico.

November 1860, Abraham Lincoln was elected President of the United States of America; the margin of victory in the State of California was only 711 votes and Lincoln was sworn in as the first Republican President, January 1861.

February 4, 1861, seven Southern states seceded from Union and representatives from South Carolina, Mississippi, Florida, Texas, Georgia, Alabama and Louisiana met in Montgomery, AL, “the heart of Dixie” establishing the Confederate States of America. The created a separate Confederate Constitution and elected former US Secretary of War, Jefferson Davis as President of the Confederacy.

April 12, 1861, the Confederate Army fired upon Fort Sumpter in South Carolina, overwhelming Union Soldiers who surrendered and in rapid succession the states of Virginia, Tennessee, North Carolina and Arkansas joined the Confederacy.

In often vicious hand to hand combat , brutal conditions firing iron bullets, well over 600,000 Confederate and Union soldiers died on the bloody battlefields of the US Civil War with untold injuries to troops, civilians and military support personnel throughout the North and South.

May of 1865, Confederate President Jefferson Davis was captured in Georgia and sent to prison. Confederate government officials announced the succession government ceased to exist, officially ending the US Civil War on May 13, 1865.

On June 19, 1865 – Union Army Maj. Gen. Gordon Granger arrived to lead over 1,800 US Colored Troops at the Port of Galveston Island, Texas to secure the final Confederate Port and Southwestern border with the Republic of Mexico.

During 2019 National Juneteenth many events will mark the 400th Year of Return, remembering the long journey since the first enslaved Pan Africans arrived at the British Colony along the James River, today’s Fort Monroe, Hampton, Virginia.

Restoration of “Slavery in California” and legal disenfranchisement mandated by the “White Male Only” citizenship in the original California State Constitution, followed by restrictive “racial apartheid laws” established by the California State Legislature, many continue to impact us today.

The State of California, a major destination in the National Underground Railroad Network to Freedom, will offer an authentic contextual review of 1840-1875 and challenge “Victims of the “Lost Story.”

Our “Voices to be Heard Capital Campaign” will help lead the official research, documentation, preservation and interpretation of our “Gospel Soldiers” and stations along the California Underground Railroad Network to Freedom.

Juneteenth is our National Freedom Day. The State of California before, during and after the US Civil War (1840-1875) has a “hidden story” to tell while honoring the contributions of thousands of “unknown” US Colored Troops who gallantly fought and died for the freedoms we enjoy today.