From our inception, the Anti Police-Terror Project has never subscribed to the belief that policing in America can be fixed. The system is not broken and thus cannot be made to right itself. Born of the slave trade, policing in America was then - and is now - about the catching, killing and incarcerating of Black and Indigenous bodies. We are an abolitionist organization committed to interrupting and rapidly responding to state violence, radically transforming the way in which we as a society define public safety and develop new practices to implement community security that are not rooted in race-based capitalism, white supremacy, patriarchy, racism, violence, rape and murder. The data is clear - the American model of criminal justice is a failed experiment that has cost thousands of lives. 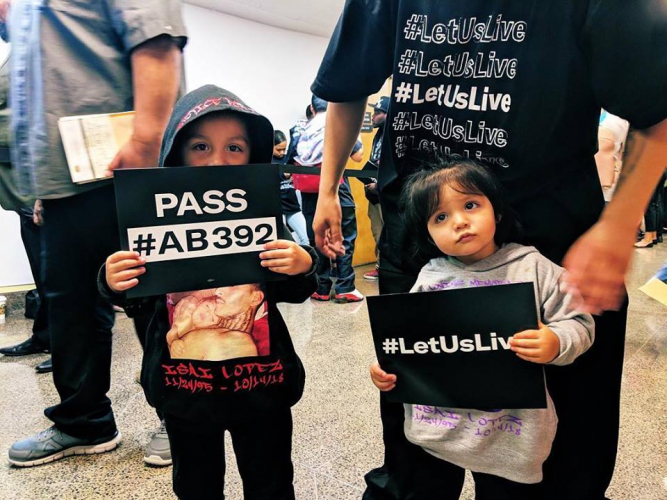 That said, bodies are falling at the hands of state violence in genocidal proportions, so as we walk the road to absolute abolition - we also need to deal with the material conditions our communities are facing right now. The police in California kill nearly 200 people every single year, the majority of whom are people of color and over half of whom are unarmed. This reality for us means that we must work to enact radical reforms as we walk the road to abolition, thus operating in all lanes toward liberation.

Over the last few weeks, it became apparent that AB 392 - the Use of Force Bill - was no longer a “radical” bill. Despite that fact, we remain a cosponsor and stand with the Let Us Live Coalition and Assemblymember Dr. Shirley Weber in seeing the bill through to victory.

Currently, in our State’s Capitol, police associations wield an unrivaled amount of power. Democrats and Republicans in both the Senate and the Assembly are unwilling to cross the police associations for fear of ending their political careers. The amount of money that law enforcement funnels into political campaigns and other legislative endeavors is unmatched by almost any other special interest group, and they are always ready to enter a pro-police candidate into a race to challenge any politician who dares not do their bidding.

How, in an environment heavily influenced by law enforcement, were we able to pass a bill through the Assembly that effectively reforms current use of force law and has law enforcement withdraw opposition?

It is important to note that this approach would not have worked without the persistence of Assemblymember Dr. Shirley Weber. Dr. Weber took heat from all sides and throughout remained steadfast to a bill that - regardless of amendments - would stay true to the bill’s original intent: Change the legal standard under which law enforcement can justify utilizing lethal force and hold police criminally liable when there is no justification to be found.  This bill - in its current form - does just that.

While much of the aspirational and radical language that remained in the bill for the majority of this legislative cycle was removed, this bill remains one of the most - if not the most -  restrictive bill in the country with respects to police use of force. While law enforcement is working feverishly to save face and spin this into a win; they know - and we know - what really occurred: They were forced to accept a heightened use of force standard with accompanying language and restrictions that they fought tooth and nail for two years to reject.

There are dozens of families across the state who still support this bill and who have fought endlessly - enduring unimaginable trauma - in hopes of preventing this horrific tragedy from happening to another family ever again. We stand in solidarity with them.

Yes. It is true that the police will get more money for training.  Our understanding is that this money will go to POST and not to individual departments and be solely utilized to train police on this new standard.  To our minds, we want that training to take place so they can’t say they didn’t have it as a justification for not adhering to the new law.

As the legal standard 392 creates is subject to the interpretation of DAs and the courts, our coalition worked to give as much direction as possible to those entities in the bill itself. Our main concern with the latest round of changes to AB 392’s language was that de-escalation, once prominent in the bill’s language, was made an implicit requirement. While we are disappointed that the most direct language has been removed from the bill, AB 392 still includes the components necessary to require district attorneys and courts to look at use of force incidents much differently than they have been under current law.

Is this radical reform? No. Does this give us a better opportunity to hold law enforcement accountable when they kill one of our own? Yes.

So while it is clear that there is much base-building, organizing and educating to be done across the State with respects to police, police violence, and the power of the police lobby, it is also clear that this legislation represents an opportunity to make it more difficult for law enforcement to kill with impunity while we build power and capacity in a manner that paves the way for radical reforms to come to fruition in our near future.

The work now must focus on building the people power necessary so that legislators are more afraid of us than they are of the police associations. The reality is that under the current conditions, when we play the state’s games, this outcome - at great cost - is the best we can expect. And as we cannot change the rules of the game, we must change the game itself. That is the mandate of now.

http://www.antipoliceterrorproject.org/cal...
Add Your Comments
Support Independent Media
We are 100% volunteer and depend on your participation to sustain our efforts!