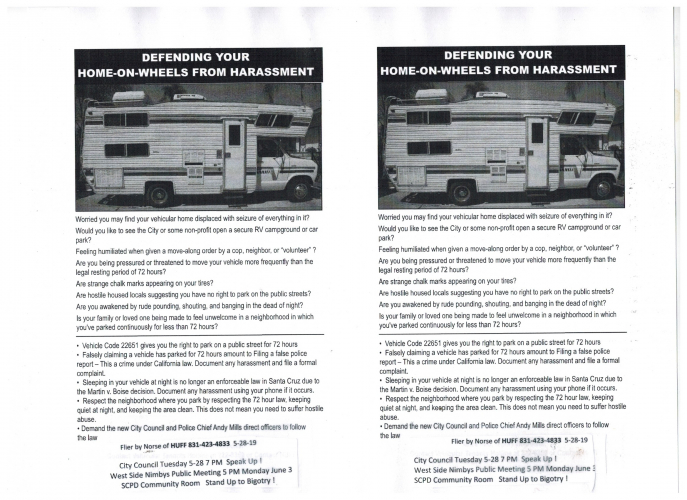 original image (2338x1700)
CALLING OUT CHIEF MILLS
Many months ago, Alicia Kuhl and other RV-dwellers held a press conference at the police station. She and others asked Chief Mills (who attended) to advise the public and his enforcement staff to stop harassing those whose vehicles are their homes who are legally parked. And to advise noisy and hostile NIMBY's that making frivolous, malicious, or false complaints about folks in vehicles overstaying the 72 hour limit was itself a crime. He declined to do.

She presented screen shots of the website, and also urged the community to oppose vigilante activity, quoting numerous facebook posters who seem to be urging or enabling it (see attached flyer of speech).

WATKINS REPRESSION DETERRING SPEAKERS?
Unlike last Council meeting, all speakers were able to speak for two minutes, though Watkins for the second time barred all group presentations. Also the abrupt cutoff of speakers and subsequent clearing of the chambers at the last meeting may have discouraged some from coming to speak. At least one man who stood in line behind me, said he'd given up and wouldn't bother to speak since the Mayor would probably not allow it.

I commented during my speech (also attached) that the City Council "Progressives" don't seem interested in extending Oral Communications to allow all there to speak--even for the limited 2 minutes (several years ago it was 3 minutes).

Last time Councilmembers Sandy Brown and Justin Cummings joined the repressive Watkins/Mathews minority to vote down a proposed extension of Oral Communications time--resulting in a tumultuous delay as people protested.

MORE VIGILANTE THREATS
Kuhl also posted on the facebook page of Santa Cruz County Homeless Advocates a video of a "Santa Cruz Looks Like Shit" poster under the name Jeremy Hoekstra harassing and threatening a man sitting on the sidewalk outside the Bike Church. (See https://www.facebook.com/groups/SantaCruzCountyHomelessAdvocates/ for May 27th).

Frances Pain recalls stumbling and falling on the sidewalk with groceries tumbling everywhere--ignored by everyone except a homeless man across the street. Tyler suggested that as more and more fall into debt and homelessness, it will be the homeless themselves that will provide real help and guidance.

Curtis Reliford spoke passionately about racial discrimination in Santa Cruz and the tickets he'd been given for his musical vehicular fundraising.

ACTION OPTIONS
I don't remember any Janus workers speaking but previously several of them talked about wretched working conditions there. So I added to my flyer their announcement of a picket happening 2-4 PM Thursday May 30th at 200 7th Ave. 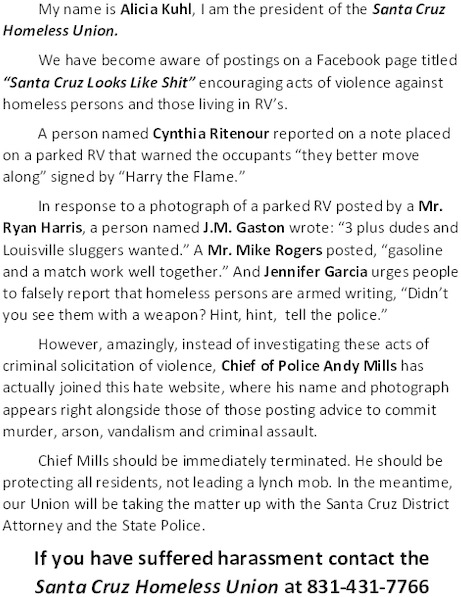 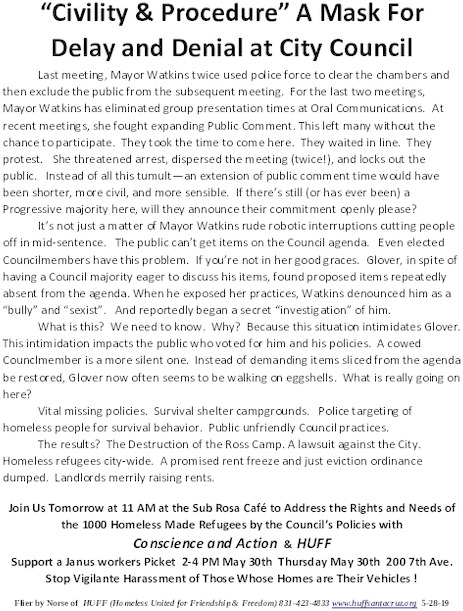 Download PDF (544.6KB)
Flyer distributed at the Council meeting as well as Alicia's.
http://huffsantacruz.org
Add Your Comments
LATEST COMMENTS ABOUT THIS ARTICLE
Listed below are the latest comments about this post.
These comments are submitted anonymously by website visitors.